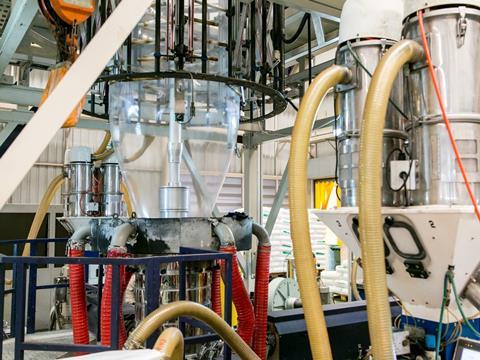 Using the new multilayer blow line technology with MDO, which is supplied by Hosokawa Alpine, INEOS says it will work with its partners to develop, design, and produce PE and PP-based flexible packaging film using fewer polymers. The company claims this will increase the recyclability of the product.

INEOS adds that the MDO-multilayer line from Hosokawa Alpine heats and stretches polymer films to improve their physical and barrier properties, enabling them to be used in different product applications.

According to INEOS, flexible packaging films are a low carbon solution for transporting food and other goods, and also offer increased shelf life. The company is apparently aiming to produce flexible packaging films that provide these properties while reducing the number of polymers from different chemical families, which can make them difficult to recycle.

INEOS claims that the investment creates the potential to prevent approximately one million tonnes of waste per year from being sent to landfill or incineration.

The new line will reportedly be installed in INEOS’ R&D labs in Brussels, Belgium, in 2023, where the company says it will leverage its expertise in resin design and develop new, mono-material flexible film packaging products.

Rob Ingram, chief executive of INEOS O&P Europe North, comments: “This investment is further evidence of our commitment to taking action across the value chain to create a more sustainable future. Flexible packaging films keep our food fresh and safe to eat, but we recognise and share people’s concerns about plastic waste.

“I’m excited about the prospect of working closely with our partners to use this world-leading technology to develop new capabilities and a more recyclable solution for this important product.”

Earlier this year, INEOS announced that its range of recycled polymer grades, Recycl-IN, will be used by Coveris for a new stretch-hood packaging film, which will reportedly contain a minimum of 30% recycled material.