Datacenters are attracting attention due to the amount of power they use, particularly amid government efforts to reduce greenhouse gas emissions. As the industry looks to address the problem, much of the focus is on new and proposed datacenters, leaving the vast number of older and inefficient datacenters out of the limelight. It is however these older, less efficient datacenters, that would make a dramatic difference in the amount of energy used for IT overall.

Power usage effectiveness (PUE) is an imperfect measure of datacenter efficiency – for the same facility, it can change depending on a variety of factors. As an average over time, though, it can provide some insight into how efficient a facility might be compared with others in the same region. Despite the imperfect nature of PUE, it is clear that improving a datacenter’s efficiency can make a dramatic difference in the amount of power used overall. Even still, there is a balance that needs to be struck here. Other factors, like the cost of an efficiency-enhancing retrofit, should be considered, in addition to whether the improvement in energy use would require deploying more water or other resources.

Reducing the carbon footprint of IT

As enterprises continue to digitize and data is generated at an exponential rate around the world, there is an increasing need for places to store and process this data – i.e., datacenters. As these facilities of all sizes grow, they are attracting attention due to the amount of power they use, particularly as countries look to reduce their carbon footprint. We currently estimate that roughly 94 terawatt hours of power are used by datacenters annually in Western and Eastern Europe (including enterprise, hyperscale and leased datacenters).

Figure 1: Estimated power used by all types of datacenters in Europe 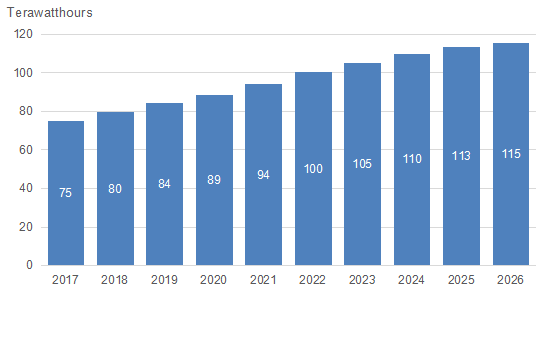 There are several ways to improve the carbon footprint of IT and we discussed some of them in this report. It is of course important to use less electricity to start with. This can be done by, for example, shutting down “zombie servers” – those that use electricity but no longer have workloads or data on them – consolidating workloads so that there are more per server, which reduces the total number of servers and enhances the utilization of each one; and using newer, more efficient servers. Public cloud providers typically can design servers that are more efficient and put multiple workloads on each one to maximize their utilization.

In recent surveys and models, we found that running business applications on cloud infrastructure, rather than in on-premises enterprise datacenters in Europe, could reduce associated energy usage by nearly 80%. So public cloud servers are generally much more efficient overall than enterprise-operated servers. But even enterprise-owned servers can be made more efficient by boosting their utilization and increasing the number of newer servers.

This is especially important because enterprises have growing “edge” deployments, servers and other IT equipment that are outside of large datacenters. According to 451 Research’s surveys and Datacenter Market Monitor, in EMEA there are as many as 1.22 million enterprise server rooms, micro-datacenters, datacenters with less than 100 kW of IT power, and telecom/network hubs, as compared with an estimated 16,000 enterprise datacenters with more than 100 kW. Many of these small deployments exist for a particular reason (e.g., location requirements, latency) and cannot easily be shifted to public cloud. Reducing the amount of energy used by these servers could make a substantial difference to an enterprise’s carbon footprint.

For larger deployments, another way to improve carbon footprint is to enhance the efficiency of the facilities that the servers and other equipment are kept in. The main way to improve datacenter efficiency is to enhance the cooling system, which can use as much electricity (or more) to keep servers from overheating as the servers themselves use to operate. This is reflected in PUE.

Power usage effectiveness is a ratio of the total amount of power needed to operate the datacenter (which includes cooling and lights), divided by power used to run computer equipment. The lower the number, the less additional power is used to run the facility beyond what is required for servers/networking equipment. This can be considered a measure of the datacenter’s efficiency. Older facilities can have PUEs of 2 or higher because the cooling infrastructure and power transformers are relatively inefficient and require a lot of additional electricity to run. In a survey we carried out for the report noted above, European enterprises cited on average a PUE of 2.1, while most cloud datacenters aim for an average PUE of 1.3-1.4 or lower, and leased datacenters can be anywhere in between.

One way for a datacenter to boost efficiency (and lower PUE) is to use outside air to cool the facility rather than traditional chillers (air conditioners), sometimes using water evaporation as well. Datacenters in relatively cool, dry climates can take advantage of this type of cooling more often. Using liquid rather than air to cool the servers is another option that is gaining traction. Leveraging more efficient cooling, along with hot or cold aisle containment systems and more efficient electrical distribution systems, a highly utilized facility can achieve PUEs of 1.4, 1.3 or even as low as 1.1 on occasion.

For easy math, a datacenter offering 10 megawatts (MW) of IT power, with a PUE of 2.0, requires 20 MW of power in total to operate. Every decimal point improvement in efficiency would save 1 MW of power (or 8,760 annual MW hours). We estimate that enterprise datacenters in Europe (those with >100 kW of utilized power) used an average of 34 terawatt hours of power in 2021. Reducing their PUE from 2.0 to 1.4 could have saved about 11 terawatt hours of energy (see Figure 2). This is approximately the amount of electricity used by a city the size of Hamburg (1.7 million citizens with per-capita electricity use of 6.8 MW hours per year). 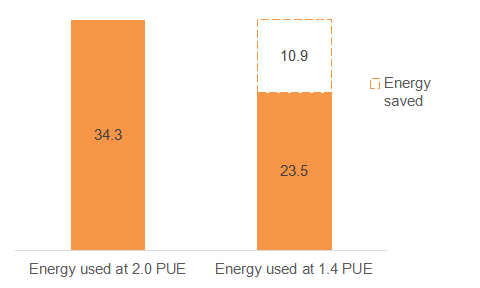 One would think, therefore, that enhancing datacenter efficiency would be a key element of sustainability programs – and it is certainly a metric that organizations look at. However, datacenters are rarely – if ever – retrofitted with the latest technologies, as this is difficult to do when a facility is running. It is also expensive. So even though the technology exists to make datacenters more efficient, only the newest facilities typically are equipped with it.

Furthermore, facilities that are fully utilized run more efficiently than underutilized facilities, but we consistently hear that enterprise datacenters sit well under capacity (at roughly 61% on average, according to one recent survey of European organizations), and, as a result, average PUEs globally have not improved dramatically over the past several years. In many cases, it may be better from a carbon standpoint to move IT equipment to a newer, shared (and thus more highly utilized), more efficient facility.

PUE is an imperfect measure and can change depending on how utilized the facility is, what the weather has been like, how many people are working at the facility, whether there is office space in the building, and other factors. Still, on average, over a period of time, PUE can give a sense of how a datacenter’s efficiency compares with that of others in the area. In addition, sometimes adjusting the datacenter to use less electricity (and have a lower PUE) can require the facility to use more water or impact other elements of the environment.

In short, although PUE may not be a perfect way to measure overall datacenter sustainability, it is being employed throughout the industry as a starting point to think about efficiency and will be a key measure to keep an eye on as part of broader sustainability projects and goals.