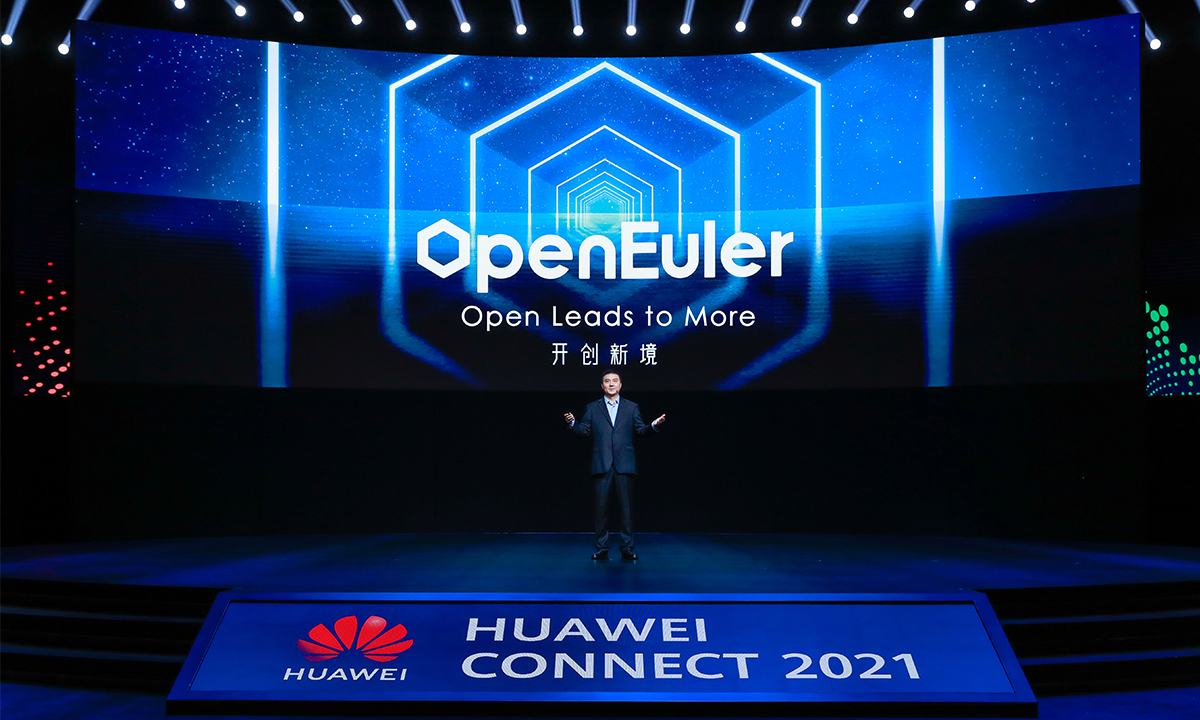 Chinese tech giant Huawei launched openEuler operating system (OS) on Saturday, another self-developed OS after the HarmonyOS, as it tries to “solve the domestic stranglehold problem of lacking its homegrown OS in basic technology,” and build a full-scenario covered ecosystem to prepare for more US bans.

The openEuler OS can be widely deployed in various forms of equipment such as servers, cloud computing and edge computing. Its application scenarios cover Information Technology, Communication Technology and Operational Technology to achieve unifying an operating system with multi-device support, according to the company’s introduction.

In the ICT field, Huawei provides products and solutions such as servers, storage, cloud services, edge computing, base stations, routers, industrial control among others, all of which need to be equipped with an OS. Huawei has therefore been building capabilities to achieve a unified OS architecture, and meet the demands of different application scenarios, the firm said on Saturday.

The openEuler program was initially announced back in 2019 as an open source operating system. Today’s launch is an updated one.

Huawei will focus on HarmonyOS and openEuler at the same time. Both will also be open source, in an effort to solve the domestic stranglehold problem of lacking a homegrown OS for basic technology, Huawei’s rotating chairman Eric Xu Zhijun told reporters at a roundtable interview on Friday.

The openEuler OS mainly targets enterprise customers rather than consumers. To reach more enterprises, it still has a long way to go; therefore, Huawei may firstly apply it to its own products, Xiang Ligang, a veteran industry analyst and a close follower of Huawei, told the Global Times on Saturday.

“Most firms are still using Windows OS or UNIX, and Huawei may want to compete with them in this area,” Xiang said.

The openEuler’s positioning is to construct the ecological base of the national digital infrastructure, and to undertake the historical mission of supporting the construction of a leading, reliable, and secure digital foundation for China, Huawei’s founder and CEO Ren Zhengfei said in an internal talk with company research staff last week.

Harmony and openEuler still have a long way to go, Ren said, noting that Harmony has already “begun to move forward, and we still have anxious expectations for it.” Meanwhile, openEuler is also making great strides.

Since its official launch on June 2, HarmonyOS 2.0 reached another milestone on Thursday: 120 million devices, which formerly ran Google’s Android, have been updated to the in-house OS, making it the OS to reach that figure in the shortest amount of time.

Huawei’s latest move to build its own OS is also part of the Chinese tech giant’s efforts to transform from a hardware maker to a software provider as hardware businesses, especially smartphone makers, are seeing increasing barriers due to the US’ chip ban.

“The transformation process is painful, since it’s a transformation of the business model. But the good news is that we have gradually changed over,” Xu said,

Besides the two OSs, Huawei also laid out an ambitious blueprint for the future digitalization era during its ongoing annual flagship industry event, Huawei Connect 2021. The company’s plan ranges from artificial intelligence (AI) to cloud businesses, and it vowed to use its ICT capabilities to empower the transformation of a wide range of industries from finance, mining to the medical field.

Huawei Cloud, which was launched just four years ago, has already brought together more than 2.3 million developers, 14,000 consulting partners and 6,000 technology partners, and it also made more than 4,500 services available in the Huawei marketplace, data provided by the firm showed.

While in response to a Global Times question about whether Huawei has hedged some of its losses in the traditional smartphone businesses from the emerging cloud unit, Xu said its cloud unit is still suffering losses.