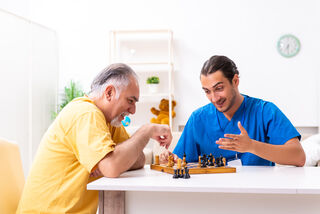 When you imagine an older person, what sort of picture pops into your head? Do you see someone walking stooped over a cane? Do you imagine them in a long-term care facility sitting in a wheelchair? Or do you imagine someone competing in a track meet, like the athletes who participated in last month’s National Senior Games track and field competition?

A sizeable body of research demonstrates that how you view aging — your personal perceptions and ideas about what it means to get older — can affect your health and well-being as you age.

In one of the most well-known studies on this topic, Yale Public Health Professor Becca Levy followed 660 people aged 50 and older living in a small Ohio town for more than two decades. Over the years, participants responded to statements about aging, such as “things keep getting worse as I get older” or “I am as happy now as when I was younger.” They also answered questions about their functional health, such as whether they could climb stairs, walk half a mile, and perform household chores.

Since then, Levy has authored and contributed to research that demonstrates how our perceptions about aging have broad influences on our health and longevity. A systematic review published in 2020, which included more than 600 studies, found that ageism, i.e., our stereotypes and prejudices surrounding aging, led to significantly worse health outcomes in 95.5% of the studies on this topic in 45 countries and across 11 different areas of health.

The details are fascinating. One study found that having positive beliefs about aging reduced participants’ likelihood of developing dementia. This was true even for study participants with a variant of the APOE gene, the strongest risk factor for dementia.

Another study followed participants for 50 years and found that people with negative views on aging were more likely to experience a cardiovascular event, such as a heart attack or a stroke. Another found that negative perceptions of aging are linked to poorer memory. And older adults with positive views about aging were 44 percent more likely to recover from severe disability compared to those with negative perceptions. And there’s more. People with more positive views on aging perform better on hearing tests and are less likely to develop mental health problems.

The evidence is clear: Your views on aging matter to your own health. But what can you do about it? Levy published a book this year titled Breaking the Age Code that includes some suggestions about how you can change your perceptions.

She suggests paying attention to ageist stereotypes that you encounter on television, in movies, in news, or in person. It’s important to identify them in your mind. If you notice someone making an ageist comment, challenge the stereotype if you can.

It can also help to seek out relationships with older adults that you respect and admire. Ask co-workers or neighbors of different ages to socialize or join you in an activity you enjoy.

The take-home message: Your personal viewpoints on aging have a significant impact on your health and longevity. There are steps you can take to improve your own perceptions of aging, such as noticing stereotypes and making friends with older adults.