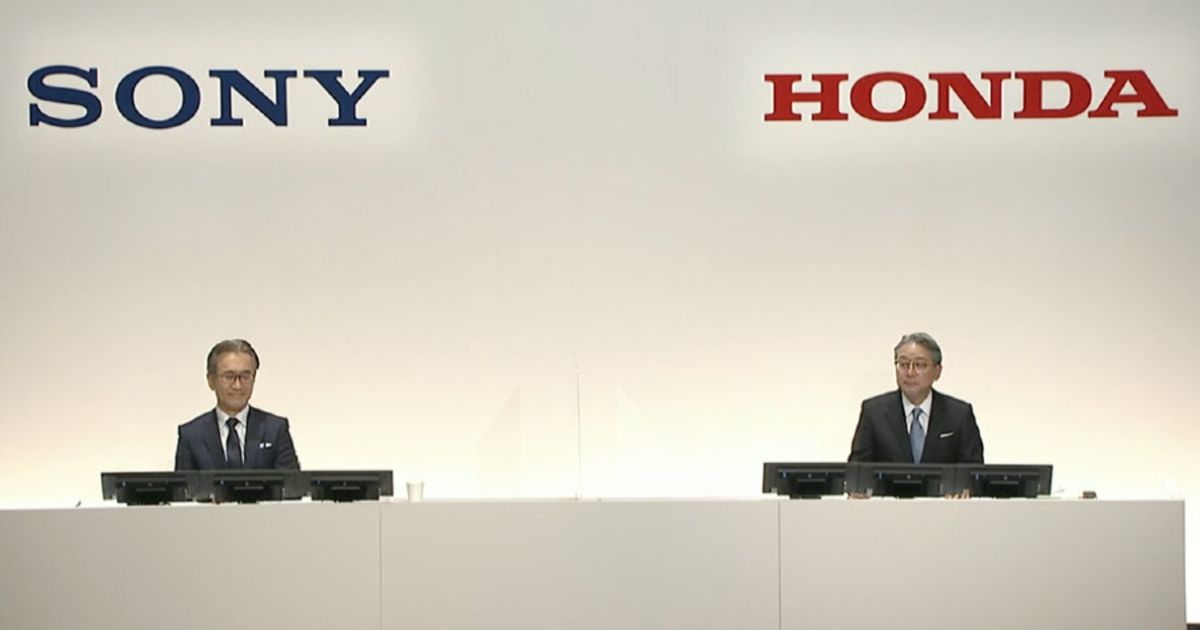 TOKYO – Honda, in the midst of a radical corporate makeover, will team with Japanese electronics giant Sony Corp. on a new joint venture to develop and sell electric vehicles.

The tie-up is the first major collaboration between two iconic Japanese brands from different industries to tackle the challenges of new mobility in an auto industry under siege by change.

Under a memorandum of understanding, announced March 4 by Honda and Sony, the companies said they will form a new company within this year for “high value-added” battery electrics and commercialize them in conjunction with mobility services.

Honda and Sony want the company, yet to be named, to start sales in 2025.

A Honda spokeswoman said the new company would sell its vehicles in the U.S., Japan and Europe, but added that production sites are still under consideration. Honda declined a volume target.

But Honda CEO Toshihiro Mibe said the initial enterprise is expected to be small.  But the Honda boss said that tying up with a tech company was crucial to innovating the business.

“This is maybe an unprecedented approach,” Mibe said at press conference held with Sony CEO Kenichiro Yoshida. “It was so difficult to take a bold step outside. But through this new joint venture, we can create new, unexpected value, stimulating the strategy of Honda.

“It’s like a chemical reaction, combining Honda and Sony,” he said.

Sony CEO Kenichiro Yoshida said that new mobility technology will be the “megatrend” of the next decade, just as the advent of smartphones was over the last 10 years.

“Going forward, mobility will become increasingly be similar to the mobile sector, from the perspective of both technology and the business model,” Yoshida said.

The combination of the auto-tech heavyweights could be Japan’s answer to maintaining the country’s competitive edge against new digital-native entrants from Silicon Valley and China.

Honda will contribute its expertise in body manufacturing and after-sales service, while Sony chips in its knowhow in imaging, sensing, telecommunications, networking and entertainment technologies.

The new company will plan, design, develop and sell EVs but not operate an assembly plant. Honda will be responsible for manufacturing the first EV model, they said.

The vehicle will use a mobility service platform developed by Sony.

“Although Sony and Honda are companies that share many historical and cultural similarities, our areas of technological expertise are very different,” Mibe said in the joint statement.

“Therefore, I believe this alliance which brings together the strengths of our two companies offers great possibilities for the future of mobility,” he said.

The move comes as Honda tries to bolster its position in a rapidly changing automotive industry by dropping combustion and shifting to pure electric drivetrains by 2040.

Speaking in an interview with Automotive News late last year, Mibe said forming new partnerships, even with technology companies outside the auto sector, would be key to the transformation.

He echoed that spirit about Sony, saying the collaboration would be open to other partners.
“This joint venture is going to be very significant in the future,” Mibe said.

The companies did not talk about batteries or detail other technological specifications.

Meanwhile, Sony — maker of the PlayStation game console and guardian of a library of movies of music through its entertainment arm — has been eyeing its own entry into the auto field to offer its services to new customers. Sony unveiled its second concept vehicle, a crossover EV prototype called the Vision-S 02, in January at CES in Las Vegas to underscore its intention.

“We intend to build on our vision to ‘make the mobility space an emotional one,’ and contribute to the evolution of mobility centered around safety, entertainment and adaptability,” Yoshida said, hinting at Sony’s plant to leverage entertainment-on-the-go.

In some ways, Sony was the original mobile entertainment pioneer when it introduced the Walkman portable cassette player in 1979. Now, it sees driving as better than walking.

The new partnership comes as technology companies increasingly see the auto sector as a new frontier. In the U.S., Silicon Valley darling Apple has long been working on an auto program, while Waymo is focused on self-driving cars. Chinese tech giants such as Baidu and Tencent are wading into autos, and Taiwan’s Foxconn and South Korea’s LG Electronics are showing interest.

In January, Sony created a company called Sony Mobility Inc. to handle its dive into cars.

Sony’s auto gambit is expected to leverage its expertise in digital and software technology, while likely leaving the manufacturing of the car itself to an outside partner. It is a model often raised the best way for other technology companies, such as Apple, to crack the auto sector.

In January, Honda boss Mibe welcomed Sony into Japan’s auto industry speaking as vice chairman of the Japan Automobile Manufacturers Association. “You already see in Europe, the United States and China many new players coming into EV manufacturing. Sony is one of them,” Mibe said. “Having additional players in the industry brings about positive competition… A new entry like Sony will really revitalize the industry.”

As a mid-sized player on the global stage, Honda needs the help of friends. For a long time, it has circled wagons with General Motors on a range of projects, from hydrogen fuel cell technology to electric vehicles. But Mibe has been actively courting new partners.

Mibe said Honda approached Sony about working together last summer and that he began meeting with Yoshida toward the end of the year to talk more seriously.

Mibe said the new venture with Sony will be separate from the Honda brand and its existing electric vehicle strategy. The plan to share an EV platform with GM for the North American market, for instance, will stay on track and is important as a mass market play, he said.

But innovation from the Sony project may feed back into Honda’s other products he said. Honda and Sony may even consider a public offering of the venture to stoke growth, he added.

Mibe plans to phase out the company’s famed internal combustion engines by 2040 on the road to transforming Honda into a carbon-neutral power and mobility provider.

Japan’s No. 2 automaker is planning to introduce its own dedicated electric vehicles platform, called e:Architecture and solid-state batteries in the second half of the 2020s. At the same time, it is developing autonomous vehicles, in part with GM’s Cruise, under a mobility-as-a-service enterprise.

And in September, Honda said it will branch into electric vertical take-off and landing, or eVTOL, aircraft with the aim commercialize the craft by 2030, and then break the bonds of earth all together by developing small, reusable rockets that can put satellites into low-earth orbit.

“Existing automobile OEMs are not necessarily the ones playing key roles in such innovation. I feel the focus shifting toward new players from different industries and startups, which take up challenges without fear of failure,” Mibe said.

“In this reality, Honda will not just stand by and watch. We want to be the one taking initiative to bring about transformation.”