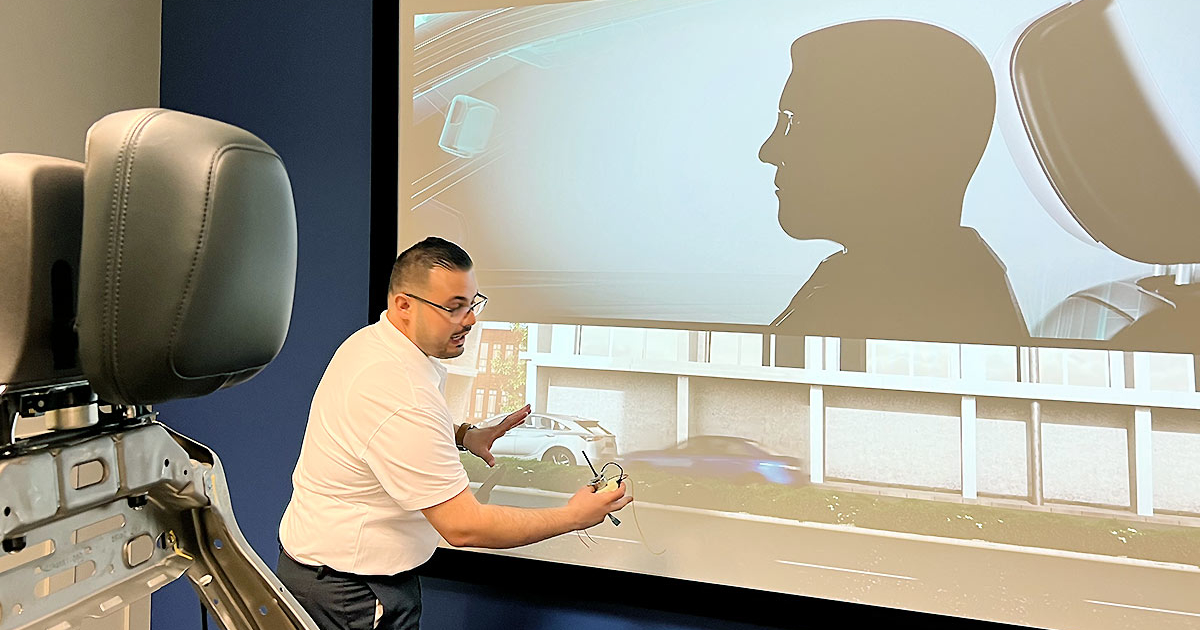 Head restraints in today’s cars move into position to help protect occupants from whiplash only after the vehicle is struck from behind.

That could change if a system developed by engineers at supplier Windsor Machine Group in Ontario is adopted by automakers.

The company’s True Active technology moves the headrests into position just before the accident occurs.

Windsor Machine Group engineers linked their adjustable head restraints to a rear bumper-mounted camera or radar. When a rear-end crash is imminent, software operating the electronic head restraints moves them closer to seat occupants’ heads in just seven-tenths of a second. That could reduce, and possibly even eliminate, whiplash injuries in some accidents.

Movable headrests designed to reduce whiplash are not new. Saab and Volvo introduced the technology in the late 1990s. And many luxury brands, as well as some Ford vehicles, already have electrically adjustable headrests that move up and down and forward and backward.

But True Active headrests are believed to be the first designed to be linked to rear cameras or radar.

“This is novel in that it activates prior to impact,” Marcy Edwards, a senior research engineer at the Insurance Institute for Highway Safety, told Automotive News. “So it’s an opportunity to get the occupants in a better position prior to impact and improve things earlier in a crash. We think it has potential, but we have to find out for sure.”

Whiplash, one of the most common auto accident injuries, occurs when the neck snaps back and then forward, like a whip, in a rear-end collision. Estimates of whiplash injuries caused by auto accidents in the U.S. each year are all over the board, from 800,000 to as many as 3 million.

The reason for the large spread is because government estimates are based on reports from law enforcement and emergency responders. But some accident victims are not attended to by police or medical personnel, and some whiplash injuries are not readily apparent, according to the Spine Research Institute of San Diego in Coronado, Calif., which studies injuries from auto accidents.

True Active headrests hold such promise that IIHS funded testing of the system this summer. IIHS bought two Honda Pilots, sent one to Windsor Machine Group for fitment of the technology and then on July 19 crash-tested both vehicles at its facilities in Virginia. Engineers are examining the data now.

IIHS engineers belted specially designed rear-impact dummies in the Pilots and conducted two tests, Edwards explained. The dummies were fitted with an array of sensors that measured the speed and movement of the head, pelvis and spine.

The first test established the baseline by measuring the results of a dummy’s head hitting the driver’s seat headrest in a rear-end collision in the standard Honda Pilot. The second crash test, in the Pilot outfitted with True Active headrests, measured those same results.

“We measured things such as how quickly the head contacts the head restraint. … We also measured the acceleration of the vehicle so we know what the severity looks like in the range of what we know happens in the real world.

“Our aim is to have a good summary in September of how we think the system performed,” Edwards said.

If the tests show that True Active headrests are effective in reducing whiplash injuries, IIHS would likely lobby automakers to install the systems.

Windsor Machine Group, with 2,500 employees and plants in the U.S., Canada, Mexico, China and Europe, was founded in 1946. The company makes headrests and armrests for the Detroit 3 and many other global automakers.

Ahmad Farghawi, executive vice president of engineering, said the company in 2019 thought there was potential to expand its power headrests beyond being a customer convenience feature.

“When we started developing the power headrests, we asked: ‘How can we convert them into something more intelligent or smart, something that would adjust on its own when the vehicle is in danger of being in a collision?’ ” Farghawi said.

One of the challenges Windsor engineers faced was comfort of the seat occupants. For a headrest to be effective in reducing or preventing whiplash, it has to be as close to the head as possible and as high as possible — a position many drivers find uncomfortable, Farghawi says. In fact, he says, because of a lack of comfort, the vast majority of drivers don’t keep their headrests in the best position to reduce or prevent whiplash.

But True Active headrests can solve that problem, company officials say, because the system can move the headrest up and down or back and forth, or in both directions at same time. “The radar communicates to our headrests that a collision is happening. It adjusts from whatever position the occupant has the headrest in less than a second, hopefully preventing injuries before the crash even occurs,” said Farghawi.

Windsor Machine officials demonstrated the system to automakers this past spring.

In April, they invited Ford, Toyota, Stellantis and General Motors engineers to see a demonstration. They drove close behind a vehicle equipped with the system, as if a crash were about to occur.

So now the company is waiting for IIHS’ assessment of the Pilot crashes to see whether the system’s real-world performance meets expectations.

And, of course, cost is a concern.

The cost to add True Active headrests to a vehicle could vary widely. Windsor’s four-way electrically adjustable headrests are already on some vehicles, such as the Ford Expedition and Lincoln Navigator, which has the brand’s Perfect Position seats. Farghawi says to make those headrests True Active would require only software to be written to link the seats to the vehicle’s rear radar.

But at GM, for instance, most vehicles don’t have tilting headrests, so it would likely take a redesign of the upper seat frame to incorporate the brushless motors that move the headrests.

According to IIHS, insurance companies pay about $4 billion per year on claims related to whiplash injuries from auto accidents. One of the institute’s goals is to investigate safety technologies that can reduce those payouts.

When IIHS can prove a technology makes vehicles safer, it often encourages automakers to install it. A top safety rating from the group can help sell vehicles because its crash test ratings are highly influential among safety-conscious consumers.

Says Edwards: “We are always looking for opportunities to find restraint systems that can help reduce injuries.”