You’re reading the web edition of STAT Health Tech, our guide to how tech is transforming the life sciences. Sign up to get this newsletter delivered in your inbox every Tuesday and Thursday.

The harm of heart algorithms

Algorithms used to estimate risk of heart problems are becoming increasingly common in cardiovascular care. But a new study of more than 100 of these tools published in Circulation found that they often performed poorly when applied to new populations. The study, led by researchers at Tufts University, reported that the algorithms’ struggles frequently created the potential for net harm to patients. The study is notable for two reasons. First, it is a rare attempt to calculate net benefit versus harm for algorithmic tools, and lays out a framework for applying that assessment to other products. And second, its finding that harm is likely to result from these tools runs counter to the prevailing assumption that, even if imperfect, using such algorithms to inform risk is better than nothing. The big takeaway?  If these algorithms are ever to really help patients, better evaluation before deployment and monitoring afterward are both imperative.

In e-commerce, the recipe for digital disruption is simple: Find a service someone is delivering badly, and do it better, faster, and cheaper. But in health care, would-be disruptors are aiming at the wrong target. In an opinion piece for STAT, Sean Doolan, the founder of Virtue, a venture firm that backs health care startups, said that instead of trying to replace doctors, digital health companies should focus on replacing the legacy technology systems that give doctors so many headaches. Doolan said the biggest opportunities lie in delivering alternatives to existing electronic health records software and picture archiving systems.

“Technology should enable clinicians to do their best work and take joy in it,” he wrote, “not undermine the methods they’ve developed to deliver quality care.” Read the full article here.

A Q2 to watch in digital health

Is digital health’s IPO window about to close? Will the struggles of companies that have already gone public lead to more mergers and acquisitions? Is all of this starting to sound a bit like the dotcom bubble of the late 1990s? Those are some of the questions at the front of our minds as we begin a new financial quarter. To keep up with the news, here’s our rundown of the events and deals to watch in Q2. 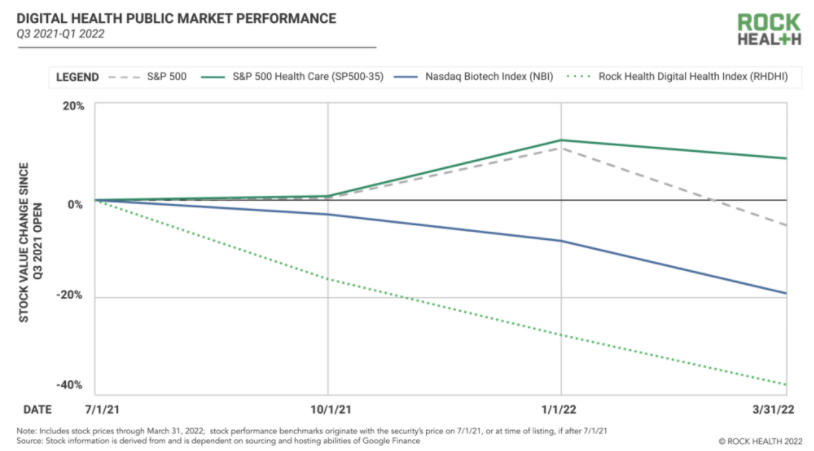 With enthusiasm for digital health investments hitting all-time highs during the last two years, it’s no surprise to see some signs of a slowing-down. In Rock Health’s look at the first quarter in 2022, analysts found that funding across the sector totaled $6 billion — still an enormous sum, but it marked the first time that first quarter funding has dropped, year over year, since 2019. The report also tracked a significant underperformance of digital health stocks — as shown by the Rock Health Digital Health Index, in the chart above — compared to the broader market, and even compared to the biotech sector, which has had a rough time of its own.

What’s going on? Rock mostly points to recent exits as a downward pull on the sector, seeing an average 55% dip compared to the 17% decline in stock value among longer-lived companies. And SPACs in particular seem to weigh heavily on the sector’s average — just one more reason to keep an eye on ongoing turmoil for companies the took the speedier route to market.

AI for everything rakes in rounds