Gwen Stefani seems to have hacked the system when it comes to aging. The singer has spent a long time in the limelight. She’s had a long and very impressive career. Her songs and her look are iconic. But, despite the fact that she is 52, she somehow still manages to look like she’s in her early thirties. So, how does she do it? What are her secrets and how can we follow suit and age like Gwen?

Take off your makeup before bed 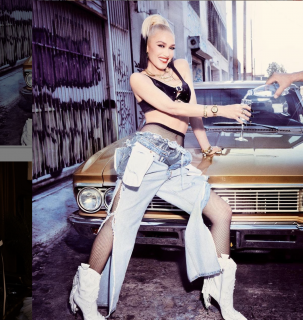 Perhaps not surprisingly, given that she was a makeup artist in her early 20s, Stefani loves playing with makeup. She admits to wearing a lot of it but it’s definitely a part of the iconic, edgy look that we all know and love. Stefani, despite being a huge star, told Cosmopolitan that she still does her own makeup when she is playing live. She explains that it’s “something about that whole kind of war paint, you know, putting it on, building the confidence. Once I get the makeup on, it’s showtime, I’ve said that for years and it’s so true”.

However, according to her, the most important part of Stefani’s makeup routine is taking it off. She says that she always removes her makeup and makes sure that she gets all of it off. The singer admitted to Elle that she wasn’t always good at making sure all of her makeup was off. Saying “It was hard when I was younger because I was always on a tour bus, literally washing my face with bottled water, inside a bus”. However, she maintains that the key is making sure your face is completely clean and free of any makeup. The skin doesn’t get much time to breathe so making sure that it can at night is vital.

Stay out of the sun

This probably sounds obvious but despite the fact that we know it isn’t good for us, we’re all guilty of spending too much time in the sun and not using sunscreen when we are in the sun. Stefani maintains that this is one of the most important things when it comes to staving off wrinkles and other signs of aging. Stefani told Elle, “you definitely see it as you get older. Later in life, you’re like, ‘What is that?!’ and it turns 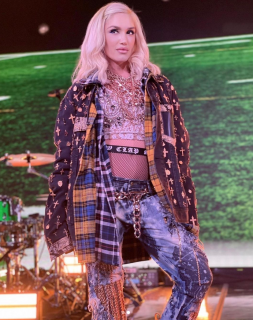 out it’s from the sun and you’re like, ‘Oh why did I do that to myself?’”. Other celebs including Drew Barrymore and Jennifer Garner are also huge advocates for staying out of the sun. And they’re right, sunscreen is vital. Whilst one of the main reasons to wear it is to prevent skin cancer. But cancer isn’t the only reason to wear sunscreen. Spending too much time in the sun, though it may be good for your vitamin D levels, can cause wrinkles and premature aging.

Since the age of 12, Stefani has been a vegetarian and tends to try to eat a healthy and balanced diet. Nowadays, she tends to follow a mostly plant-based and vegan diet and this is definitely one of the reasons for her healthy skin. Veganism boasts an incredible amount of benefits not just for humans but also for the planet. Eating a plant-based diet that is rich in fruits and vegetables has been linked to a number of health benefits. According to nutritionist Barbie Boules, these benefits include a reduced risk of diabetes type 2, heart disease, and even cancer. According to Healthline, “a vegan diet tends to provide more fiber, antioxidants, and beneficial plant compounds” than a traditional western diet. 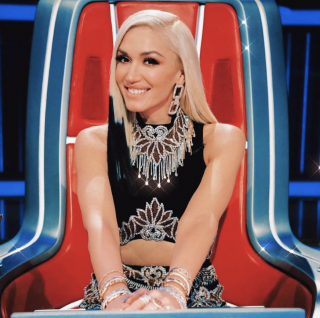 good for you. Boules adds that just adding more plants to your plate can aid in promoting “a healthy gut microbiome”

Working out is important

It seems like Stefani spends a lot of her time in the gym. And It’s really no surprise, Stefani, even at 52, has washboard abs and is extremely fit. In order to maintain her amazing figure and fitness, Stefani does tend to spend a lot of her time in the gym. Generally, she works out four times a week for 60-75 minutes per session. When her former personal trainer, Mike Heatlie spoke to Shape, he explained that the routine for clients like Stefani generally includes a combination of HIIT and cardiovascular training. Currently, Stefani is training with celebrity trainer Gunnar Peterson. Peterson tends to focus a lot on “cardio that uses your whole body to challenge more muscles and burn extra calories in less time”. Peterson suggests rowing as an option as “It’s easy on joints and works every muscle”.