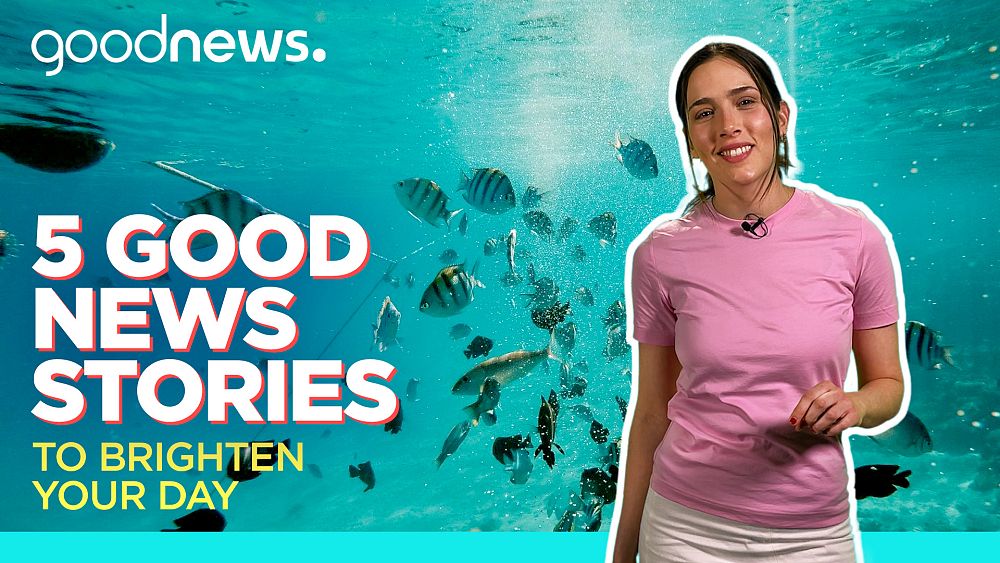 Here are this week’s stories about what’s going well in the world:

(Plus a little something to put a spring in your step).

Watch the video above for more on each story or read on below.

1. An Italian fisherman has been stopping illegal fishing trawlers in their tracks – using sculpture

Paolo Fanciulli began to notice the unmistakable signs of illegal trawling – a method of fishing that involves dragging a net through the water – around the coast where he fishes. The heavy, weighted nets used for trawling were tearing up the seabed and marine life in their wake.

“They were devastating the sea and my way of life,” Fanciulli told Euronews. “If the sea dies, so does the fisherman. You can’t just take, you have to give too.”

And so he created a sculpture park beneath the sea, called La Casa dei Pesci – House of Fish.

But how do sculptures stop trawling?

Sculptures create a physical barrier against illegal trawlers because they snag the nets. And then if the trawlers don’t release the nets, their boats can sink.

The project has contributed significantly to putting a stop to illegal trawling in the area and the artworks have encouraged marine life back to the waters.

Seagrass is growing again, and so are fish numbers.

2. More than 120 golden retrievers have been successfully evacuated from Odesa, Ukraine

The dogs were transported in vans and four-wheel drives. “[We had] 20 dogs per car, which made it very uncomfortable for them, but we had no other solution, we had to take them to safety,” said Alexandr Kovali, the administrator of the golden retriever club in Ukraine.

The trip was long and hard, but after three days in customs, the dogs have made it to Chișinău, the capital of Moldova.

The space where the dogs are being hosted was provided for free and their food was provided with the help of donations from the community.

The plan is for the dogs to reach various medical centres and families across Europe and the US. Golden retrievers are known for being kind and gentle companions, making them great assistance dogs.

3. An Ecuadoran toad that was thought to be mute has found his voice – listen to him sing (yes, sing) in the video above

One day, Jorge Brito, an Ecuadorian biologist, was walking through the forest when he thought he heard the chirping of a cricket. But when he bent down to take a look, he found instead a toad – but not just any toad, one called the Rhinella festae that’s instantly recognisable thanks to its prominent nose.

The toad’s song broke the century-long silence of the species, which was thought to be mute because it doesn’t have vocal slits and sacs.

“The group was not supposed to sing, it is a silent group, but actually it is not, it actually sang, and this has also led to the discovery of some species that, for technical reasons, should be silent but have not been,” said Diego Batallas, a biologist involved in the investigation.

The song of the toad, which lives in the highlands of Ecuador and Peru, is similar to a bird’s.

4. Promising new technology that could have a huge impact on how we treat and cure cancer

Columbia University researchers have created a cloak of invisibility to hide bacteria when targeting cancer tumours.

The findings could offer revolutionary advantages to bacteria-based immunotherapy, a treatment that helps the immune system attack cancer cells, which is a growing topic of interest in cancer research.

“Bacterial cancer therapy holds unique advantages over conventional drug therapy, such as efficient targeting of the tumour tissue and programmable drug release,” says Prof Kam W. Leong, one of the study’s researchers and a professor of biomedical engineering at Columbia University.

The good news is that the cloaking approach presented in the new study could address those two critical issues.

The cloak hides the good cancer-fighting bacteria from our immune system so that it can travel faster directly to the tumour, undetected.

Scientists have also managed to make the invisibility cloak fade over time, so that the bacteria can be detected by the immune system only once it has reached the tumour, and be cleared in other parts of the body where the bacteria is not needed, avoiding any negative side effects.

There were several key findings in this year’s World Happiness Report.

First, the pandemic brought an increase in social support and benevolence.

Professor John Helliwell of the University of British Columbia said the team behind the report was able to assess not just the importance of benevolence and trust, but how they have contributed to wellbeing during the Covid-19 pandemic.

“Trust is terribly important. We find people are much, much happier if they feel they’re in an environment where people are going to watch their back. And it’s really important to say that because people fail to understand all over the world how generous other people are,” he told Euronews.

Another less surprising result from the report was Finland taking the top spot as the happiest country in the world – for the fifth year in a row. And this year they scored significantly higher than the other countries in the top ten. Denmark continues to occupy second place, with Iceland third and Switzerland fourth.

Beyond confirming the fabled Nordic happiness, the findings of the report also reveal what makes up a happy society.

Scientists found that the formula includes state institutions that are not corrupt and are able to deliver what they promise, and are generous in taking care of their citizens. Strong cultural initiatives that build a sense of community and unity among the citizens were also shown to be important.

The report also concluded that 60-70 per cent of the difference in happiness between people is caused by environmental factors, whereas 30-40 per cent is influenced by genetics. These findings confirm that there’s a lot our governments can do to make us happier – and plenty we can do ourselves.

Thanks for reading and watching the Good News round-up.

Seen an uplifting story you’d like to see featured on the show? What would you like to see more of?

We’d love to hear your thoughts – tag us on social media using #GoodNewsEuronews to send your comments to the team.

And if you’re still hungry for more positive news, there’s more below.

Good News from the week of March 21st: A malaria cure, how Spanish could boost your mental health and a solar-powered hospital

Good News from the week of March 14th: Favourable news thanks to Covid-19, some fantastic news for the animal kingdom and progress for gender equality