A telephone used to be just a phone until it became a smartphone. A watch, once simply a timepiece, can now be a smartwatch. A refrigerator — remember the “icebox”? — can be smart, too. Any gizmo is “smart” as long as it’s connected to the internet — the Internet of Things.

“I’m going to tell you, that was the one where my mind started really opening up,” says Andrew Kurtz, founder and CEO of Kopis, a Greenville-based software development company currently working with a manufacturer that’s weaving sensors into a new absorbent undergarment.

“It has the ability to say, ‘You know, the patient has been lying on one side for too long, they’re probably at risk for getting bed sores and so forth.’ There’s the ability with this stuff to bring things to the attention of people sitting at their desks,” Kurtz says.

Kurtz joins a rising chorus of Greenville “technosticators” who envision IoT as our connection to a mind-blowing future: say, an exercise jersey with sensors that tell our smartwatch our heart rate is too high, signaling our smartfridge to pour an ice-cold beer from our smartkeg and turn down the thermostat. Then fetch our driverless car.

IoT comprises the behind-the-scenes components of all that wizardry, primarily by collecting, processing and storing data, namely in the cloud.

“The device isn’t as important as the technology behind it,” says Frank Greer, founder and CEO of Zipit Wireless, another Greenville IoT company. “Our cloud technology helps us manage this device remotely and connect it to a variety of networks.” 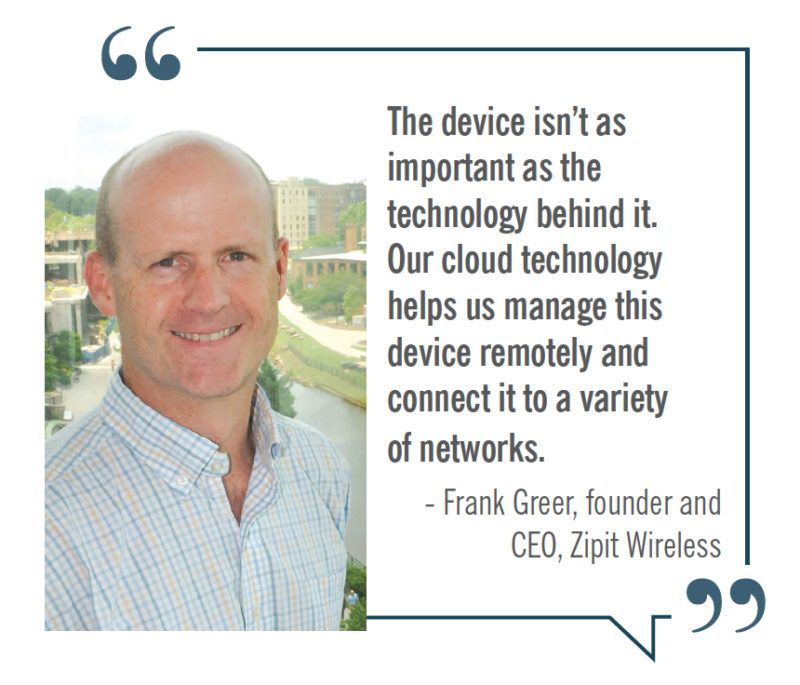 Paul Muschick, a software developer for Sealevel, which specializes in industrial automation, defense, transportation, smart cities and other major sectors, says he “focuses on embedded connectivity.”

Muschick explains that 5G, the fifth-generation data superhighway coming soon from cellular carriers, is crucial to IoT for its ability to handle ever-expanding universes of data.

“Big data is just about taking massive datasets and trying to make sense of them, whittle them down in a way that can make them useful,” he says. “The power from 5G comes in aggregating and analyzing what data typically does in the cloud after the fact.”

In 2019, Sprint announced Greenville would be the world’s first “smart city,” with 5G’s “blazing-fast network” to automate and connect buildings, parking, transportation and utilities providers, among others.

By “actionable,” he means saving time. “What’s the one resource we can’t make more of? It’s time, right?” So, for instance, “Can my car already be there, waiting for me at the front door?” 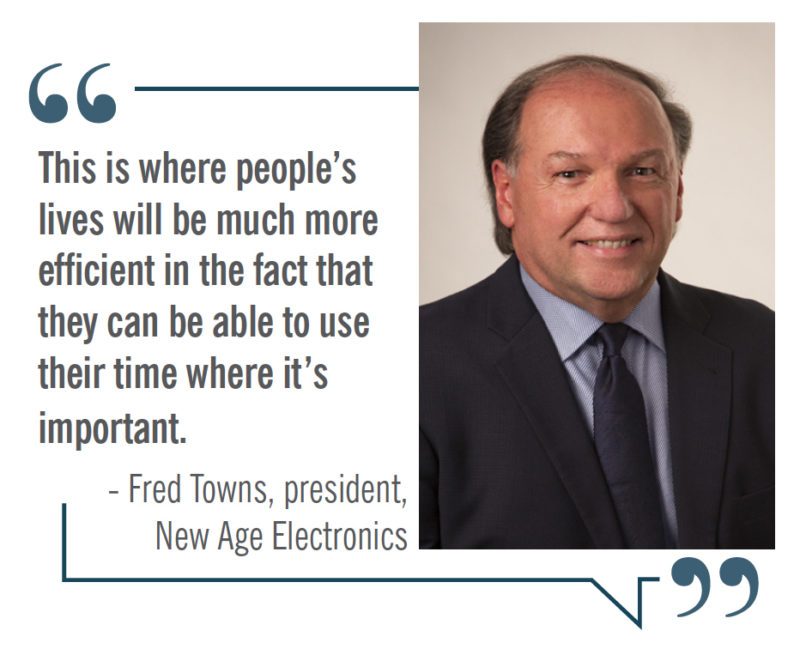 Fred Towns goes Kurtz one better. The president of New Age Electronics, a division of Synnex, talks about how — before the pandemic, anyway — commuters would park their cars and leave them sitting all day. Why do that, he muses, when you can lease out the car while you’re at work?

“If you break down your cost of paying a monthly car payment, how many hours a day do you actually use your car?” Towns says from his Manhattan Beach, California, office. “The Internet of Things is going to start to change everything like that.”

The Upstate’s robust automotive environment — BMW, Michelin, CU-ICAR and the like — is ideal for IoT development, Muschick and others say. And it’s a good thing: Fortune Business Insights sees the IoT tech industry growing from roughly $381 million this year to more than $1.8 trillion by 2028.

Revenue opportunities abound. Greer’s Zipit also provides subscription solutions. Let’s say you want to put a GPS tracker in your child’s backpack or on your dog. Samsung, one of Zipit’s customers, provides the device and charges users, say, $5 a month to use it.

So could you subscribe to an IoT network that would also feed your dog?

Sure, he says, as long as you have a smart-bowl: “You could program it easily through a smartphone app. So having it connected, gives it manageability that you wouldn’t have if it was just sitting there as a dumb device.”

He points to Proterra, the Greenville-based electric-bus company that has adopted IoT to make its vehicles run better.

Likewise, energy companies help save you money by controlling your thermostat when you’re not home and using sensors to detect parts of systems that don’t work — saving time, money and lives.

Kurtz cites the water crisis in Flint, Michigan, where sensors could have alerted authorities about lead contamination. Towns talks about using a fitness tracker to send his health data to his doctor and save him a trip to the office, with telemedicine.

As Towns put it: “This is where people’s lives will be much more efficient in the fact that they can be able to use their time where it’s important.” 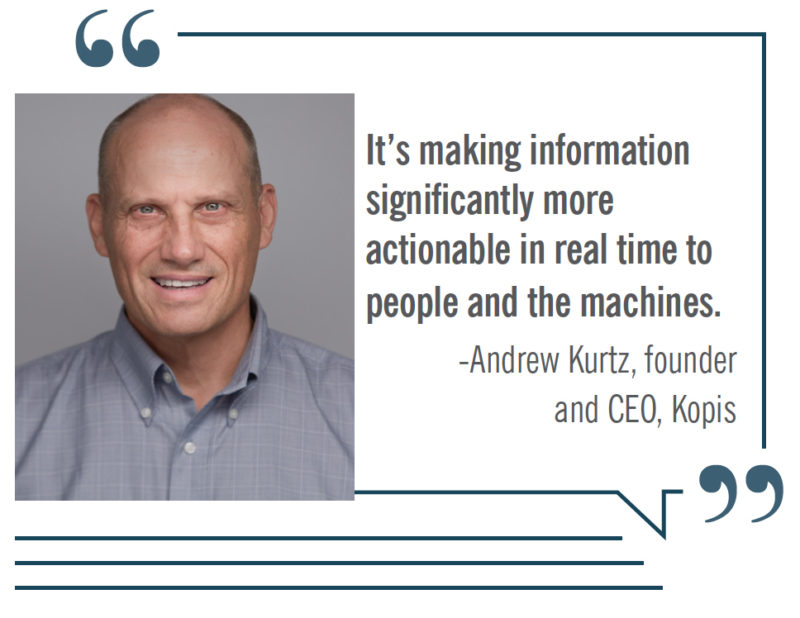 Internet of … What Things?

First off, what is the so-called IoT? The following glossary, with just a few IoT terms, is derived from TechRepublic, an IT news website, which describes the Internet of Things as “a system of interrelated computing devices, mechanical and digital machines, objects, animals or people that are provided with unique identifiers and the ability to transfer data over a network without requiring human-to-human or human-to-computer interaction.”

Big data
Algorithms analyze patterns, trends and correlations in massive sets of data. “In general, the IoT produces nothing but big data, and deriving any valuable information for decision-making from IoT requires some form of artificial intelligence or machine learning processing,” according to TechRepublic.

Cloud manufacturing
Similar to software-as-a-service, or SaaS, but applies to manufacturing and made possible through cloud computing, communication networks and the Internet of Things. 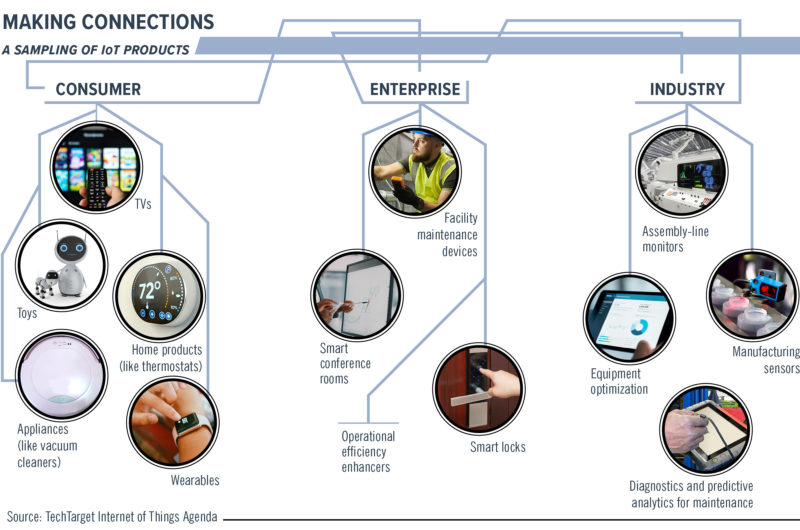 Here is a sampling of IoT products, devices and applications: