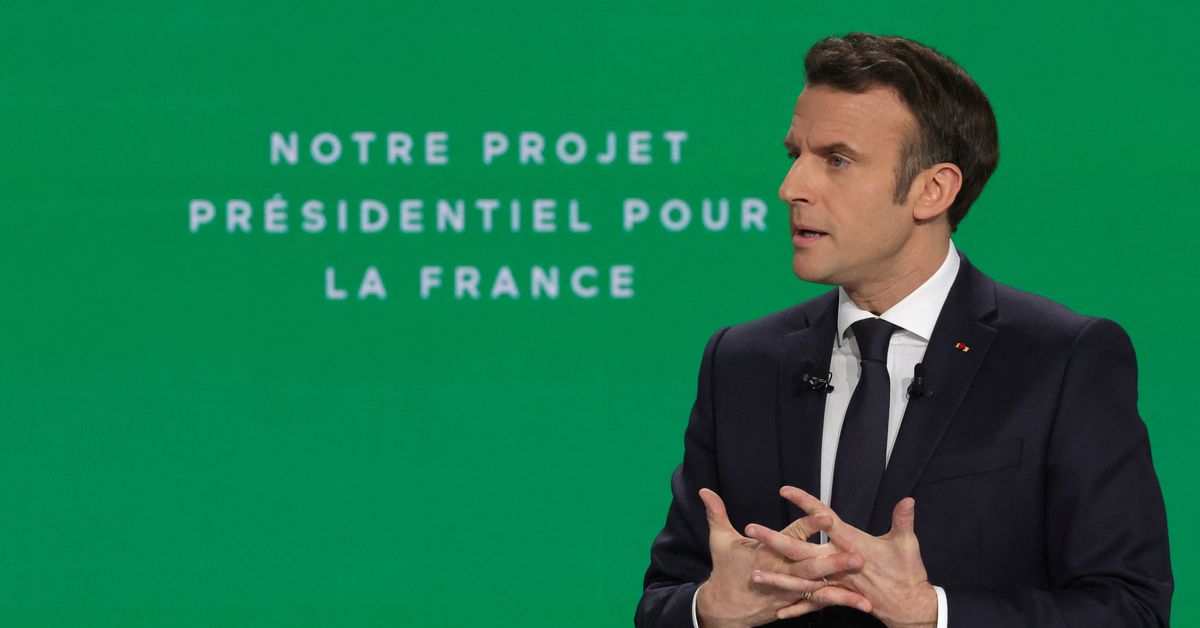 French President Emmanuel Macron, candidate for his re-election in the 2022 French presidential election, speaks during a news conference to unveil his presidential program at Les Docks de Paris, in Aubervilliers near Paris, France, March 17, 2022. REUTERS/Pascal Rossignol

PARIS, March 17 (Reuters) – French President Emmanuel Macron said on Thursday he would increase the retirement age, cut taxes and further loosen labour market rules if he wins a second term in next month’s election, seeking a mandate to press on with pro-business reforms.

Opinion polls show Macron is likely to win the first round of the election on April 10 and beat any opponent in a run-off on April 24. His longstanding lead has grown in recent weeks, with voters approving of his diplomatic efforts over the Ukraine war.

“We are at a tipping point where we can make a real difference,” Macron told a news conference, highlighting the war on the European Union’s doorstep and the global challenge of climate change. read more

Stressing his pro-business credentials is not without risk as households feel the squeeze from rising prices, but Macron said he wanted to see through a reshaping of the economy.

Laying out his campaign platform for the first time, he said he would increase the retirement age to 65 from 62, slash taxes by 15 million euros per year, make some benefits conditional on community work and reform unemployment insurance to push people to get back to work.

“It’s quite normal, especially when you consider the state of public coffers, that we work more,” Macron said.

Macron is a former investment banker who was elected in 2017 on a centrist platform and his policies have veered to the right during his mandate. But he had put some of his planned changes, including the raised pension age, on hold amid a series of crises, including the yellow vest protests and the COVID-19 pandemic. read more

With economic growth surging and unemployment falling to its current 7.4%, Macron can point to data to show he has rebooted the euro zone’s second biggest economy since he took office, but he said he wanted to go further. read more

Macron said that another key aim if he is re-elected will be to make France more self-sufficient, with proposals ranging from investing “massively” toward agricultural and industrial independence to building more nuclear reactors and strengthening the army.

France could be one of the first countries to wean itself off fossil fuels, he said, while adding that he wanted to build a “European metaverse” to compete with U.S. tech giants and make Europe more independent on that front too.

The 44-year old president, who is likely to face a far-right or conservative opponent in the run-off round, also said he would get tougher on law and order, including putting more police on the streets, tightening conditions required for long-term residency permits and making it easier to expel people whose asylum request has been rejected.

Macron also said he planned more subsidies for single mothers and inheritance tax breaks for those wanting to leave money to their grand-children or nieces and nephews.

Opinion polls in recent weeks show Macron winning up to 31% of the vote in the first round, up from around 25% last month.

But even if he goes on to win re-election, Macron will need his centrist La Republique en Marche (LaRem) party – which has failed in all recent local elections – and its allies to win a parliamentary election in June if he is to have a strong base to implement his policies.