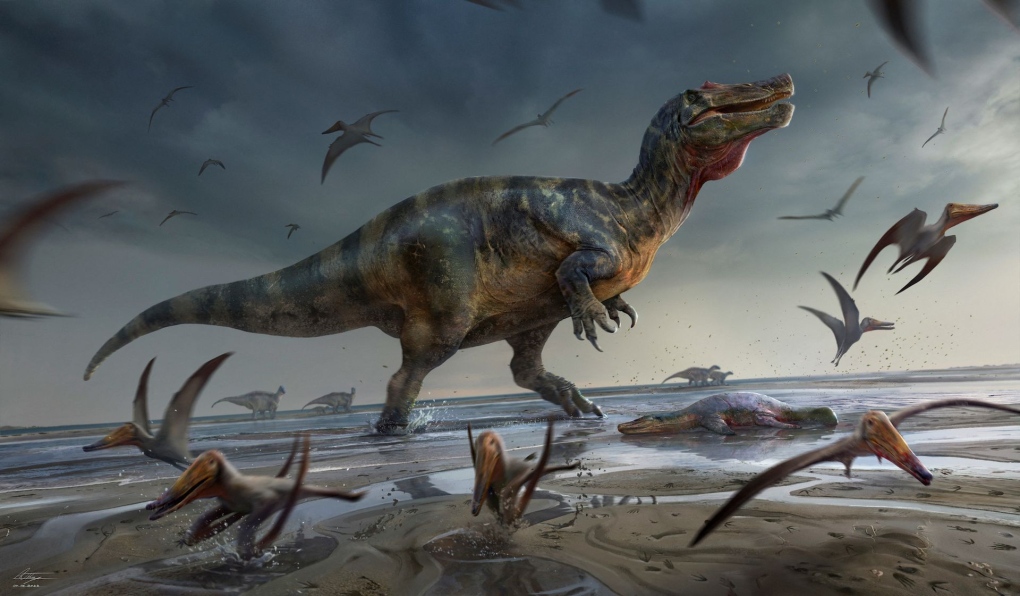 Fossilized bones discovered on a rocky seashore on England’s Isle of Wight are the remains of a meat-eating dinosaur that may be larger than any other known from Europe, a beast that was a cousin of the biggest carnivorous dinosaur species on record.

Paleontologists said on Thursday they have found parts of the skeleton of the dinosaur, which lived about 125 million years ago during the Cretaceous Period, including bones of the  back, hips and tail, some limb fragments but no skull or teeth.

Based on the partial remains, they estimated that the dinosaur exceeded 33 feet (10 metres) long and perhaps reached much more.

“The size of the specimen is impressive. It is one of the biggest – and possibly the biggest – known land predator ever to stalk Europe,” said Chris Barker, a University of Southampton doctoral student in paleontology and lead author of the study published in the journal PeerJ Life & Environment.

Based in part on a series of small grooves on the top of the tail vertebra, they concluded that it belonged to a group of dinosaurs called spinosaurs that included Spinosaurus, which lived about 95 million years ago and at about 50 feet (15 metres) long is considered the longest-known dinosaur predator.

Spinosaurs had elongated skulls reminiscent of crocodiles with lots of conical teeth – perfect for grasping slippery prey – as well as strong arms and big claws. They fed upon aquatic prey as well as other dinosaurs.

Because of the incomplete nature of the remains, the researchers have not yet given the newly described dinosaur a scientific name, but are calling it the “White Rock spinosaurid” based on the geological layer where the bones were found. They believe it is not a member of any previously identified species.

Meat-eating dinosaurs belonged to a clade called theropods, with each continent producing immense examples. They were bipedal and the largest had massive skulls and strong teeth.

Spinosaurus was Africa’s largest. Tyrannosaurus rex, approaching 42 feet (13 metres), was North America’s king, while  the similarly sized Giganotosaurus reigned in South America and  the slightly smaller Tarbosaurus in Asia. The largest-known named theropod from Europe was Torvosaurus, at about 33 feet (10 metres).

The newly described dinosaur might turn out to be as long as T. rex, according to University of Southampton paleobiologist and study corresponding author Neil Gostling.

“This one is really big,” Gostling said. “Let’s hope more fossils turn up. We would love a skull or teeth.”

Looking at the teeth could help researchers better understand this dinosaur’s position on the spinosaur family tree.

The fossils were spotted on the surface along Compton Bay on the southwestern coast of the Isle of Wight. The dinosaur inhabited a lagoon environment also populated by various plant-eating dinosaurs and flying reptiles called pterosaurs. At the time, sea levels were much higher than today and large parts of Europe were submerged.

The Isle of Wight has become one of Europe’s richest locales for dinosaur remains. The same team of researchers last year announced the discovery of two other Isle of Wight Cretaceous spinosaurs, both measuring about 30 feet long (9 metres).

Those finds combined with the latest one buttress their hypothesis that spinosaurs as a group originated and diversified in western Europe before expanding elsewhere.

“This new material corroborates our previous work that highlights Europe as an important region for spinosaur diversification,” Barker said.

Reporting by Will Dunham in Washington; Editing by Lisa Shumaker.