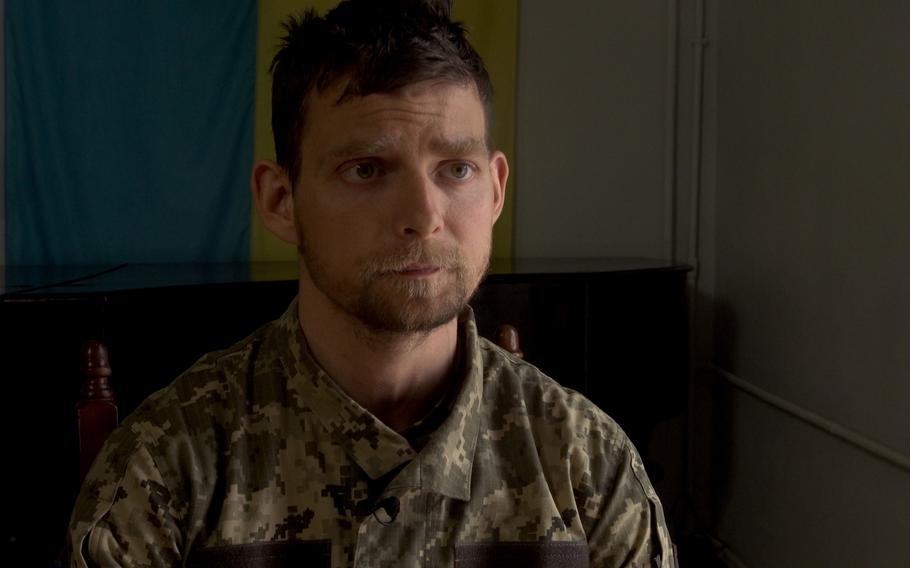 Canadian Igor Volzhanin got caught in Ukraine when the war broke out and decided to answer President Volodymyr Zelensky’s call for foreign volunteers to help battle the Russians. (Erin O’Connor/Washington Post )

LVIV, Ukraine – Canadian Igor Volzhanin was visiting friends here in late February, with plans to attend Louis C.K.’s stand-up comedy show in Kyiv, then jet to the Swiss Alps for a ski trip. Russia’s full-scale invasion of Ukraine upended all that, and Volzhanin instead answered President Volodymyr Zelensky’s call for foreign volunteers to help Ukraine fight back.

The 34-year-old former tech entrepreneur, who grew up in Toronto, has no military experience. He signed up anyway.

“I saw the early images of women picking up guns and going to fight,” Volzhanin said, “and I thought, if I can save just one person from having to do that, I will have done something for humanity.”

Initially, Ukraine cast a wide net and was willing to accept foreign volunteers with just basic proficiency in Ukrainian or English. The process from application to acceptance for Volzhanin took 24 hours.

Then, three weeks ago, the word went out that only people with combat experience and Ukrainian or English fluency need apply. The process now takes about four to seven days.

“We joke now that if I signed up today, I probably wouldn’t have been accepted,” Volzhanin said.

A native Ukrainian who moved to Canada more than 20 years ago, Volzhanin has become a valuable cog in the new and evolving machinery of the International Legion for the Defense of Ukraine – especially as its scrutiny of applicants has increased. Last month, a military official said more than 20,000 people from more than 50 countries had joined the force.

Volzhanin, who speaks Russian, Ukrainian and English, has been involved in interviews with prospective legionnaires. Officials have been checking the backgrounds of international applicants via the embassies of their nations to judge if they’re being truthful about their qualifications. He and other interviewers, Volzhanin noted, have become skilled at quickly identifying posers.

“We’ve done so many of these,” he said, “that you can pretty much spot professionals right away by the way they carry themselves, the way they talk about their previous experience, just the way they are, their demeanor.”

Interviewers regularly encounter applicants who overstate their service record. “I think we do them a favor by not letting them through,” he said.

The Ukrainian military is closely guarding details about the legion’s makeup. It declined to specify the size of today’s fighting force or the number of volunteers by country. Two Ukrainian military sources familiar with the onboarding process said that in the days after requirements were tightened, the legion’s acceptance rate dropped below 50%.

“It’s a bit like a start-up. There’s a few lessons you learn along the way,” said Corporal Damien Magrou, 33, a Norwegian corporate attorney in Kyiv and now legion spokesperson. “We have realized that training people who don’t have that experience drains a lot of resources. We’re grateful for the support, but people without combat experience are more of a burden than being of any help.”

For the first time since the war began, the legion on Thursday made two foreign volunteers available for media interviews: Volzhanin and Sandra Anderson Eira, a former professional fisherman from Norway who has been fighting with a six-person unit of mostly Americans. About 3% of the force is female, according to the legion. 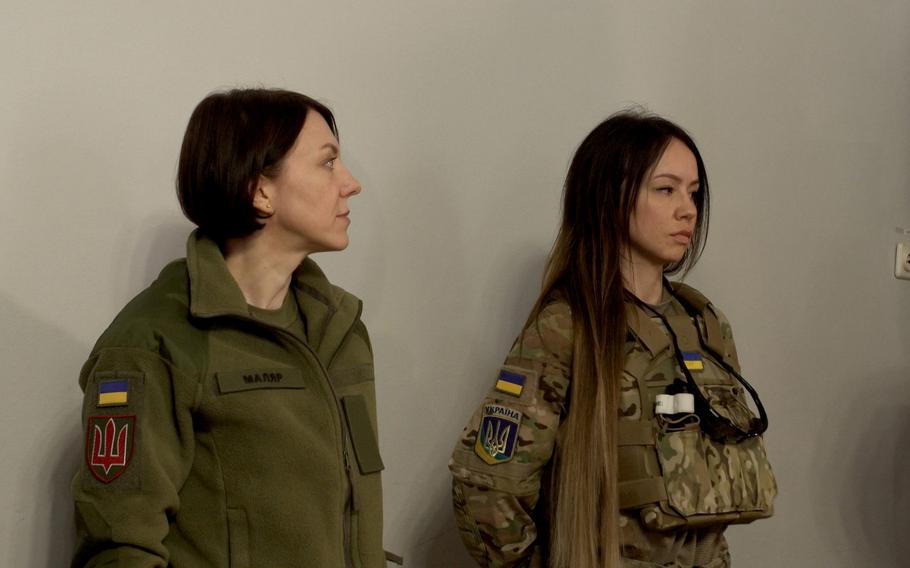 “This is where I know I should be. I feel morally obligated to be here,” she said. “In the last big war, it was my country in need of aid and all the other countries stepped up. Now it’s our turn to step up.”

Eira, who has been on the front lines for the majority of the conflict, said the veteran soldiers she’s fought alongside have stressed the unique nature of the invasion. “Because this is a trench-fighting war with modern-day technology,” she explained, “it’s a war unlike anyone has ever seen.”

Some legionnaires have walked away, Magrou said. There have been “quite a lot of people who change their minds,” though he declined to give numbers.

People “make emotional decisions to come,” Volzhanin said. “But then the reality hits at a certain point. What we want to do is make sure that reality hits early on in the process.”

To that end, interviewers ask bluntly, “Are you truly prepared to die?”

Some applicants never get to that stage. Many overstate their credentials. Others seem jumpy and nervous. One applicant ranted unintelligibly about globalism after being asked why he wanted to fight for Ukraine; he was denied.

Russia’s government has accused Ukraine of hiring mercenaries to supplement its military, an allegation the legion denies. International law requires foreign legionnaires be paid no more than regular soldiers. The claim has made the legion sensitive to the issue; interviewers are wary of applicants who ask repeatedly about pay – or about bonuses for confirmed kills.

“That is a clear indication that the person is not here for the right reasons,” Magrou said.

For every applicant who disappoints, there’s one who inspires. One American applicant told interviewers his Ukrainian grandparents had been liberated from Nazi occupation by the Soviet Union during World War II, so he wanted to help do the same for Ukrainians today. 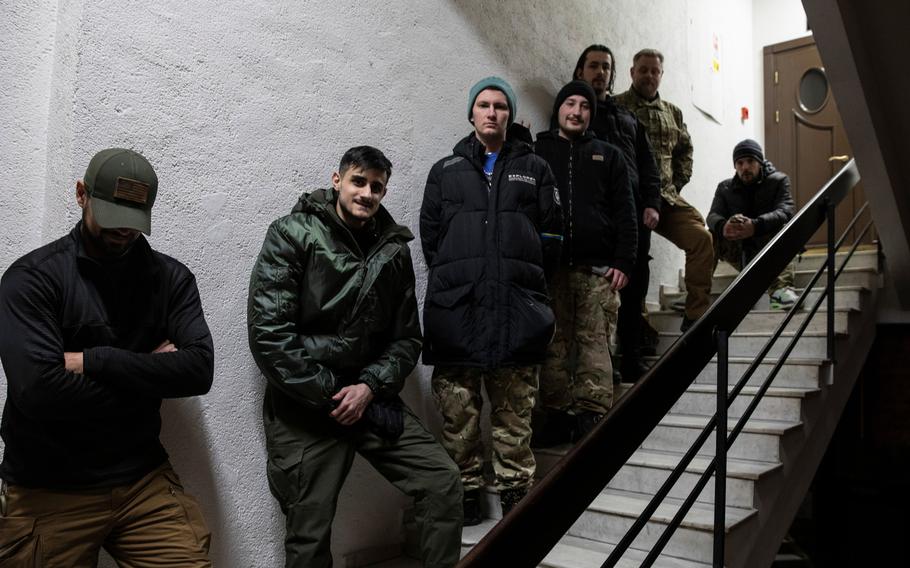 An early group of volunteer fighters gather in Kyiv, including, from left to right, Kelso from Montana, Mehmet from Germany, Adam from California, Driven from Washington State, and Nile and Mike from Sweden. (Heidi Levine for The Washington Post )

Volunteers hailing from Ukraine’s neighboring central European countries are often motivated by concerns that their countries could be next, Magrou said.

“Our war is not just a war of two countries or two peoples,” said Hanna Maliar, Ukraine’s deputy minister of defense. “It is a war of civilization against medieval barbarism. . . . The war and the fight are not just for Ukraine.”

When the invasion started in late February, Volzhanin’s parents began frantically trying to arrange travel for their son out of Ukraine. Then, Igor told them he wasn’t leaving.

“I was shocked,” said his father, Sergei Volzhanin, who lives in Ontario.

“It didn’t even seem like there was a moment of hesitation,” remembers his 30-year-old sister, Nina Volzhanina.

Eira told almost no one she’d decided to join the fight. She’s braced for her parents’ reaction when she finally speaks to them. “I don’t have my phone on for a reason,” she said.

Both Volzhanin and Eira signed on at a time when many international observers expected the Russian Federation possessed the military might to make short work of any Ukrainian defense. Volzhanin, who majored in history and politics in college, has struggled to understand the Russian strategy.

“The way the Russians invaded, the only way it made sense is if they actually believe in their own propaganda,” he said. “In the 21st century, occupying a country where the population doesn’t want that is a huge undertaking.”

Ukraine’s current success repelling Russian forces in the north and around Kyiv hasn’t assuaged his parents’ fears. His mother has become a voracious reader of war-related news. His father texts him “hello” every morning when he wakes up and waits anxiously for a reply. Only once did Volzhanin miss a check-in, triggering a day of anguish back home.

“Communism has turned into fascism,” he said Thursday. “This is a war of brother against brother, and it will be the greatest humanitarian catastrophe of the last 100 years.”

After the initial shock of Igor’s decision wore off, his father began to consider the magnitude of the war and how his Ukrainian-born son must have felt being in Kyiv when Russia attacked. A few days later, he told Igor he was proud of him: “Do what you think is right, and I will support you.”