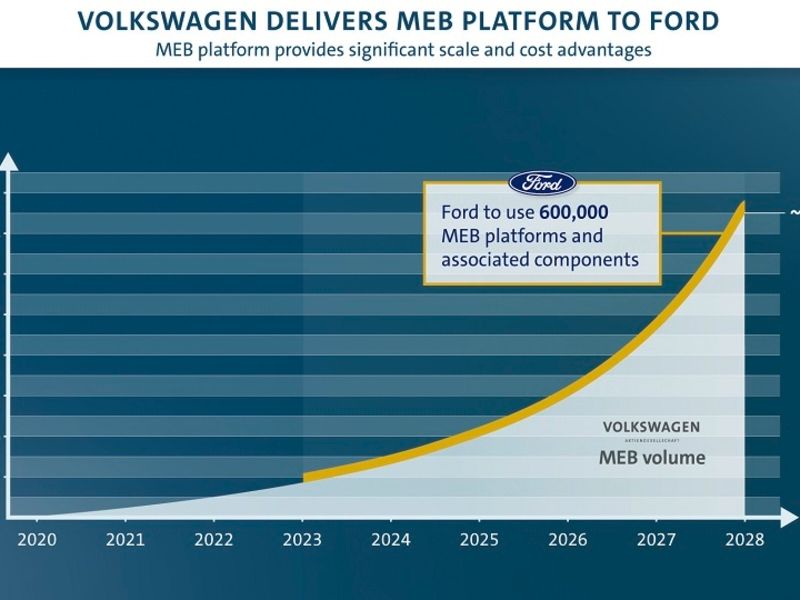 Ford Motor Co. is nearing a decision to license Volkswagen AG’s electric-car technology for a second model to be sold in Europe, people familiar with the matter said, a move that would deepen ties between two of the world’s largest automakers.

Talks regarding Ford using VW’s underpinnings — known as MEB — for another electric vehicle could lead to an agreement in the coming weeks, said the people, who asked not to be identified because the negotiations are private. Ford has already said it plans to produce a car using MEB in Cologne, Germany, from 2023.

“As we have said previously, there is the potential for a second all-electric vehicle based on the MEB platform to be built at Cologne, and that is still under consideration,” Ford Europe said in an emailed statement. VW declined to comment.

Ford has been accelerating EV plans under CEO Jim Farley, one of the main architects of the alliance the U.S. and German manufacturers formed in 2018. Their cooperation initially focused on commercial vans and was expanded a year later to include self-driving technology and EVs.

On Tuesday, Ford said it will build a $185 million battery research lab in Michigan with the goal of manufacturing its own batteries and cells for EVs.

“This only starts to hint at our electric-vehicle ambitions,” Farley said during an earnings call Wednesday. “There is so much more to come.”

Sharing MEB allows VW to boost economies of scale for the platform used by models including the ID4. In return, Ford saves time and development expense. UBS Group AG analysts recently did a teardown analysis of VW’s ID3 and praised MEB for stacking up well against Tesla Inc. on costs and other key aspects.

Ford has released little detail about the EV it will build in Cologne two years from now. It announced earlier this week it will invest $300 million to build a new light commercial vehicle at its Craiova factory in Romania, including an all-electric version due in 2024. This vehicle won’t share VW’s EV technology.