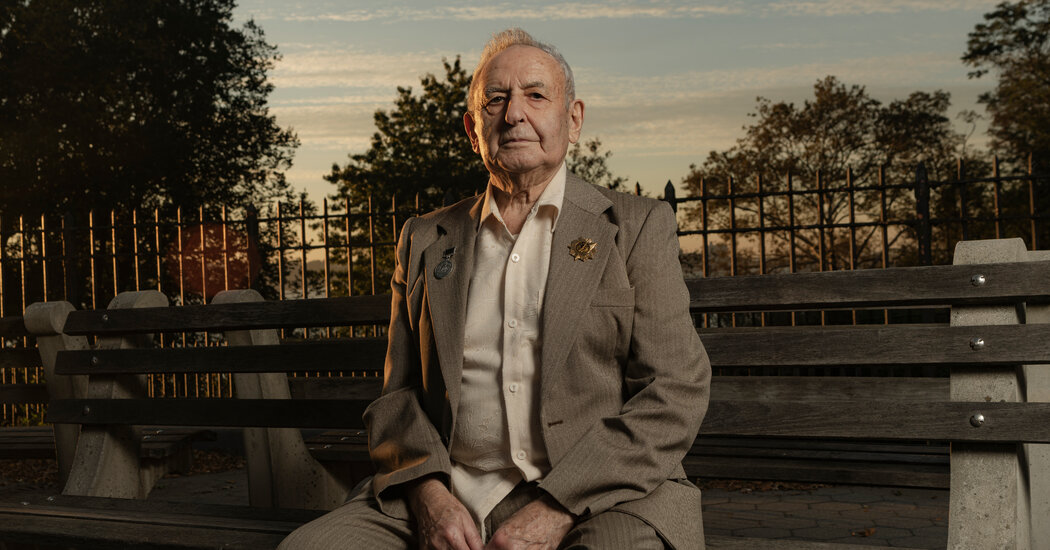 Saveliy Kaplinsky had an annual tradition.

For 15 years, almost every spring, he’d return to Minsk, where he had survived the Holocaust, then had worked to rebuild his community. During his return visits, he would honor those killed, among them, his parents, and visit the Yama memorial.

“Every year, Jews of Minsk get together at Yama to commemorate the memory,” Mr. Kaplinsky, 92, said through an interpreter. “I fly to Minsk to participate in the somber events.”

His memories of the Holocaust are indelibly etched, but because of his age, Mr. Kaplinsky ended his pilgrimages to Belarus in 2013.

“I personally come to take part in these events and talk about what we are, as Jews in America, doing to keep the memory of Holocaust victims alive,” he said.

Mr. Kaplinsky now works in his Brooklyn community to memorialize those who lost their lives.

“So many years passed,” Mr. Kaplinsky said, “I cannot forget this horror.”

Mr. Kaplinsky was born in Minsk in 1929. After the Nazis invaded, he and his family were forced to live in a Jewish ghetto, where mass killings claimed the life of his father in 1941, then his mother, his grandfather and his sister the next year.

After his mother was killed, Mr. Kaplinsky said, he began doing what he could to fight against the Nazis. When he was brought to work in a German barrack, he said, he began stealing ammunition and grenades, smuggling them in a food container to others in the ghetto, who then smuggled them to agents in the resistance. “I was doing it all the time,” Mr. Kaplinsky said.

Mr. Kaplinsky knew that if he was caught, his life and those of others, even those not involved, would be in danger. “Despite all of this, I was doing it,” he said.

In 1943, Mr. Kaplinsky and a group of other people cut the wire of the ghetto and escaped. They joined a resistance unit camped in the surrounding woods, where Mr. Kaplinsky was often tasked with keeping watch.

After the war, Mr. Kaplinsky returned to Minsk, where he learned that his two older brothers who had served in the Soviet army were his only family members to survive the Holocaust.

“‘Where to go? Who is waiting for you?’” Mr. Kaplinsky remembers asking himself upon his return. “These were the toughest days, hours, of my life.”

Over the next 50 years, Mr. Kaplinsky worked to help rebuild Minsk. He went to school at night and studied engineering, and eventually rose to be the chief engineer at a building firm.

After coming to New York with his wife in 1993 to be closer to their son and granddaughters, he became a member of the Association of Holocaust Survivors From the Former Soviet Union, and in 1995 was elected as its president. During this time, Mr. Kaplinsky also became a member of the Edith and Carl Marks Jewish Community House of Bensonhurst.

Through the group, Mr. Kaplinsky, who lives with his wife in subsidized housing and relies on Supplemental Security Income and the Supplemental Nutrition Assistance Program, received help when he needed four dental crowns last fall. The J.C.H. is a beneficiary agency of UJA-Federation of New York, one of the nine organizations supported by The New York Times Neediest Cases Fund, and it provided $550 from The Fund for the procedure. The Conference on Jewish Material Claims Against Germany, an organization that assists Holocaust survivors, contributed the remaining $1,450.

Mr. Kaplinsky said after almost three decades of working with the J.C.H., he was grateful for its help. “I am very pleased that I came,” he said. “The Russian department of this Jewish House is very, very helpful.”

Now that his dental procedure has been completed, Mr. Kaplinsky is glad he can devote his energy to organizing a spring memorial service, possibly virtually, for the Jews killed in the Minsk ghetto, and to telling his story.

“Every year after I moved to America, I went to Minsk and always participated at Yama, shared what we were here, in a far-away-from-them America, how we were keeping the memory of Holocaust alive,” he said.

The knowledge that older adults like Mr. Kaplinsky may be facing financial barriers to health care is one of the reasons that Bethene Trexel began volunteering with the Advocacy, Counseling and Entitlement Services program of Community Service Society. The group is also supported by The Neediest Cases Fund.

For retirees on a fixed income, medical expenses can be a significant drain. As a volunteer, Ms. Trexel, 74, who is retired and previously worked for a nonprofit, helps people navigate the public benefits system, and has developed an expertise in helping older adults register for Medicare.

Over her years of volunteering, one of her biggest achievements was creating an in-depth chart in 2005 to help clients navigate Part D of Medicare, which went into effect the next year and covers prescription drugs. The chart was so beneficial to Ms. Trexel and her fellow volunteers that she began updating it multiple times a year.

Current versions are accessible online, in a collection of resources compiled by the city’s Department for the Aging’s Health Insurance Information, Counseling, and Assistance Program, for everyone to access.

While counseling her clients, Ms. Trexel said, she is often able to save them hundreds of dollars a year, which can be a boon to people on fixed incomes.

“It can change people’s lives. They can have enough to pay their rent and have something to eat,” she said. “That can make an incredible difference in someone’s life.”

Donations to The Neediest Cases Fund may be made online or with a check.