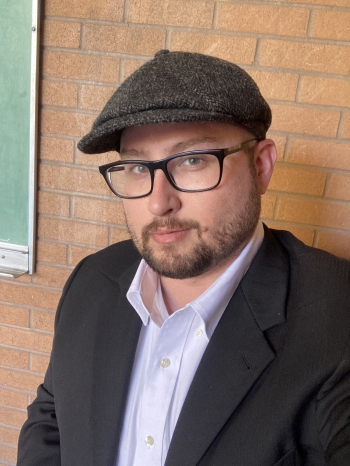 “Originally I was planning on majoring in statistics because I just really like working with numbers and finding interesting bits of information,” said Gabe Boyett, who graduated this month with a Bachelor of Science in data science, in the mathematics track. “I decided data science would allow me to apply the concepts I had been learning more, so when the (data science) degree became available and I saw that I could use the math track to not lose any progress I had already made, I knew it was what I wanted.”

Vincent Caldwell grew up in Scottsdale, Arizona, and as a non-traditional student, felt that ASU’s opportunities would give him the best possible college experience. He graduated this month with a Bachelor of Science in data science, also in the mathematics track.

“When I transferred into ASU from Scottsdale Community College, I had an entirely different plan,” Caldwell said. “However, when those plans needed to change, I asked myself ‘What would give me the most value and offer the most significant challenge?’ So, I decided to pursue a BS in mathematics. During my time in the major, I attempted to choose courses I felt would build the necessary skills for a successful career as a data scientist. When ASU offered the brand-new degree option, I knew I needed to change my major immediately.”

According to the U.S. Bureau of Labor Statistics, data scientist jobs will grow more than 31% over the next 10 years, with a median annual salary of over $94,000. Data scientist is listed as one of the top jobs in many rankings, including CareerCast and GlassDoor.

“If you are curious about the world, but don’t want to commit to a particular area of study, data science is a great option to develop skills that can be applied in many areas: biology, politics, engineering, marketing — pretty much anything,” said Associate Professor Richard Hahn. “Data science is truly next-generation liberal arts education; having data skills is akin to being able to read and write in an age when not everyone was literate.”

ASU’s data science program provides students with a strong grounding in the core areas of probability and statistics that underpin responsible data analysis. At the same time, students learn practical data skills in R and Pythonopen-source programming languages by working with real-world data sets in their classes, and especially in their capstone projects.

“The way he would show us the idea behind a certain function and then walk us through it was really helpful, and I think this class is what really got me comfortable with a lot of data science problems,” Boyett said.

Caldwell said two classes tied for his favorites. “Specifically, DAT 402: Statistical Learning, because it was my first experience with machine learning, and DAT 490: Capstone. I actually really loved doing my capstone. We had a few requirements we had to meet, but the rest of the project relied on the culmination of everything we learned in our previous classes. I was very thankful for the capstone class because it let me know that I did, in fact, choose the right major,” Caldwell said.

“I learned important lessons from so many professors — Mohacsy, Schneider, Kostelich, McCulloch, Samara, Yalim and Hahn – each for their own reason, and I really am thankful for every one of them. ASU really does have amazing math and stats professors,.”

ASU’s data science classes follow the newest trends and try to be agile in implementing the most recent ideas. The classes use interactive content, allowing students to play with graphs, sliders and animations, which helps them quickly grasp the notions and ideas in math and statistics related to data science.

“No (expensive) textbooks are used in DAT classes. Instead, free interactive e-notes are provided,” said Clinical Assistant Professor Marko Samara. “We create assignments and exercises with immediate automated feedback, allowing students to instantaneously learn from mistakes and correct themselves while working on the assignments.”

Data science combines two basic skills that are surprisingly challenging to master: probability and word problems. Hahn says that students pursuing this major should know that it isn’t necessarily easier than other STEM disciplines, such as electrical engineering or mathematics – it’s just different.

“Data science allows students to apply analytic and quantitative thinking to areas that are much broader than the traditional focus areas of applied mathematics, such as physics or engineering. The current demand for data scientists is an opportunity for our school to recruit students who love math, or want to learn to love math, but who want to apply their skills to areas that are maybe different than say finance- or engineering-type settings,” Hahn said.

Caldwell has been a student researcher in the ASU Luminosity Lab since 2019. During his time at ASU, he learned that he should not just go to class, but instead should get more involved.

“Seriously, this could be anything from clubs to research experience to student government. As soon as I began pursuing opportunities outside of class, I immediately changed my mindset from just wanting to get in and out as fast as possible to really enjoying myself. I found that the more I did, the more I actually understood the real value of a college education,” said Caldwell.

What’s next for these data science graduates?

“While I did think about grad school for a bit, as it can be pretty useful in the data science field, I ultimately decided that I would just work for the foreseeable future and try to experience new places to decide where I might want to live and which industry I really want to work for,” Boyett said.

Caldwell has accepted an offer from Deloitte to work in their government and public services department as a data scientist.

“I don’t think I could have picked a better major for myself than data science because it’s genuinely made me more than just a statistician or a mathematician,” said Caldwell. “It’s given me the skills to analyze data and critically solve any problem I may face.”

Manager of Marketing and Communication, School of Mathematical and Statistical Sciences