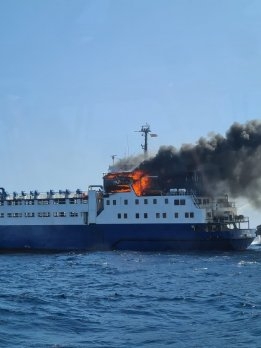 The ship has bow been towed to Tarragona for the last of the firefighting work. Image Credit: Port of Tarragona

A fire was reported on board a 54-year-old livestock carrier off the coast of Spain over the weekend.

The fire was reported on the Togo-flagged livestock carrier the Elbeik, built in 1967, off the coast of Tarragona on Friday, according to the local Red Cross. The ship was not loaded with livestock at the time.

The crew of 18 seafarers were evacuated from the vessel, and the fire was extinguished by Saturday.

The local fire brigade deployed 37 firefighters to tackle the blaze.

The ship has bow been towed to Tarragona for the last of the firefighting work, according to the Port of Tarragona authority.