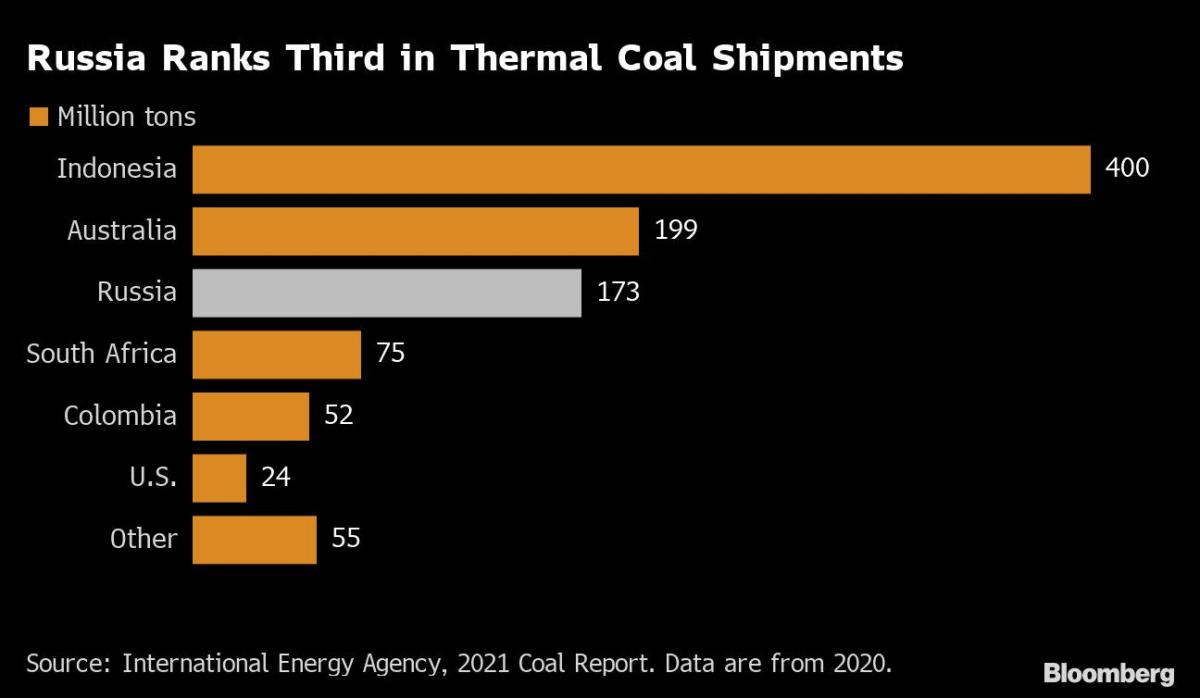 (Bloomberg) — Europe is taking a big gamble as it moves to ban Russian coal, potentially leaving itself vulnerable to shortages and rolling blackouts while the rest of the world contends with surging prices.

Russia is Europe’s top supplier of thermal coal, used to fuel power stations. As the European Union joins the U.S. to take a harder stance against President Vladimir Putin’s war in Ukraine, the continent has plans to phase out Russian shipments. The problem is that there’s no clear alternative for that huge chunk of trade, and the result appears destined to lead to a domino effect that creates a mad global scramble for the fuel.

Prices are already soaring in a market that has been tight for months. European coal jumped 14% to a three-week high on Tuesday after news of the proposed ban, with futures doubling since the start of the year. The Asian benchmark hit an all-time high in March, while in the U.S., it topped $100 a ton last week for the first time in 13 years.

“The proposed sanction would be devastating to European coal imports,” said Fabian Ronningen, an analyst at Norwegian consultant Rystad Energy AS. “Some coal can be sourced from other markets, but in general, the global coal market is very tight as well.”

It’s not just that supplies are tight. There are also logistical complications when it comes to quickly pivoting to new sources. Russia’s proximity to Europe has long been one its advantages in a market that depends on days-long shipments of heavy cargoes. Now, European buyers will have to look elsewhere, stretching supply from countries as far away as South Africa, Australia and Indonesia, where quality varies.

Miners in Indonesia, the world’s top shipper of coal for power stations, have been approached by some potential buyers from European countries including Italy, Spain, Poland and Germany, said Hendra Sinadia, executive director at the Indonesian Coal Mining Association. The prospect of rising demand for supplies other than Russia’s sent shares in Australian coal companies rallying on Wednesday, with New Hope Corp. jumping 6.9%, Whitehaven Coal Ltd. gaining 5.5% and Yancoal Australia Ltd. advancing 4.8%.

“Russian coal is the closest, cheapest and in some markets like Germany the most suitable specification, in terms of heat content and sulphur” to power Europe’s stations, said Jake Horslen, an analyst at S&P Commodities Insights. An EU ban “would pose a significant challenge for the buyers that would need to seek out alternatives,” he said.

In the long-term, prospects aren’t great for coal, the dirtiest fossil fuel. But right now, the market is booming as Europe deals with a crunch in natural gas supplies and fuel consumption surges in the pandemic recovery boom. Global carbon emissions from the power sector jumped to a record last year, partly driven by more coal burning, according to think tank Ember.

Ramping up coal production to meet demand has been challenging. The market has been hit by rail disruptions, Covid-19 outbreaks and even a temporary export ban from Indonesia, the world’s largest exporter.

“The disruption of Russian coal supply is just the latest in a wave of supply issues that have hounded the market since early last year,” Bank of America Corp. analysts wrote in a note this month.

Any sanctions on Russian coal will pressure Europe’s already strained supplies. Coal stored in Amsterdam, Rotterdam and Antwerp harbors remain at the lowest for the season in at least six years, according to weekly survey of stocks by Argus Media.

Europe buys two kinds of coal from Russia — thermal, burned by power plants, and metallurgical, used in steel making. The Russian share of the EU’s imports of thermal coal is almost 70%, with Germany and Poland particularly reliant.

The continent has grown increasingly dependent on Russia as its own production declined. In 2020, Europe shipped in 57 million tons of thermal coal from Russia, the vast majority of imports, according to the International Energy Agency.

German energy firm EnBW Energie Baden-Wuerttemberg AG said last month that it had begun to diversify its coal procurement to reduce dependency on Russia, and that a full switch would only be possible in the medium-term. The company, which relied on Russia for more than 80% of its coal last year, also said procuring the fuel in countries including Australia and South Africa would be more costly.

While the U.S. has stepped in to help wean Europe off Russian gas, it’s unlikely to be able to do the same with coal. Miners have already sold most of their output under long-term contracts and aren’t able to increase production because they have been closing mines for years. Those issues have been exacerbated by a worker shortage and logistics challenges that make it tough to get more of the product from the mines to the ports.

“There’s a lot of call for U.S. exports, but it’s hard to get it out of the country,” said Andrew Blumenfeld, data analytics director for market research company McCloskey.

There’s also a chance that Russian coal will get stranded. Most of the country’s supplies are mined in Siberia and sent by train to Baltic and Black Sea ports. Moscow will likely struggle to shift significant amounts to Pacific harbors given constraints to rail capacity, Morgan Stanley analysts said in a report on Tuesday.

“We think the market is facing a complicated puzzle, and we expect some of Russia’s exports could be lost due to logistics challenges,” the bank said, estimating that about 30 million tons of Russian coal could get stranded.

But even before the potential sanctions, European energy companies were already struggling to get their hands on Russian supplies. Many banks were refusing to finance commodities trading, forcing some of the continent’s biggest utilities to buy coal in South Africa and Australia.

An increase in exports from countries like Indonesia “could help offset the lost tonnage from Russia,” the Bank of America analysts said, while warning that “it won‘t make up for the quality difference.”

“With supply issues abounding, the market will have to balance through demand destruction,” the analysts said.

That’s easier said than done, especially given the larger problems for energy supplies in Europe that have reverberated across the world.

Tight markets for natural gas have created energy shortfalls at a time when wind and hydro have been unreliable in some regions. Europe and Asia have been hit the worst, with skyrocketing markets, blackouts in places like India, power shortages in China and the threat of outages in other countries. Energy prices have also soared in the U.S., though not to the same extremes.

Meanwhile, some analysts had cast a critical eye on some European countries’ reliance on Russia even before the current war in Ukraine. Germany, the Netherlands, Turkey, and Poland combined received almost a quarter of all Russia’s coal exports in 2021, according to U.S. Energy Information Administration data.

About 10% of Germany’s electricity is generated by burning hard coal, and unlike neighboring France, the country has little nuclear power as a fallback option, with its last remaining plants going offline this year as part of a transition to more renewable energy. Still, Economy Minister Robert Habeck says Germany can rid itself of Russian coal before the end of the year.

The reliance on Russia for energy more broadly limits Europe’s ability to place sanctions on other fuels, according to Thierry Bros, a former energy analyst who’s now a professor at the Paris Institute of Political Studies.

“Because of Germany and Hungary’s too close relations with Russia, we are stuck in banning only coal, which is a good first step but far from enough,” Bros said.