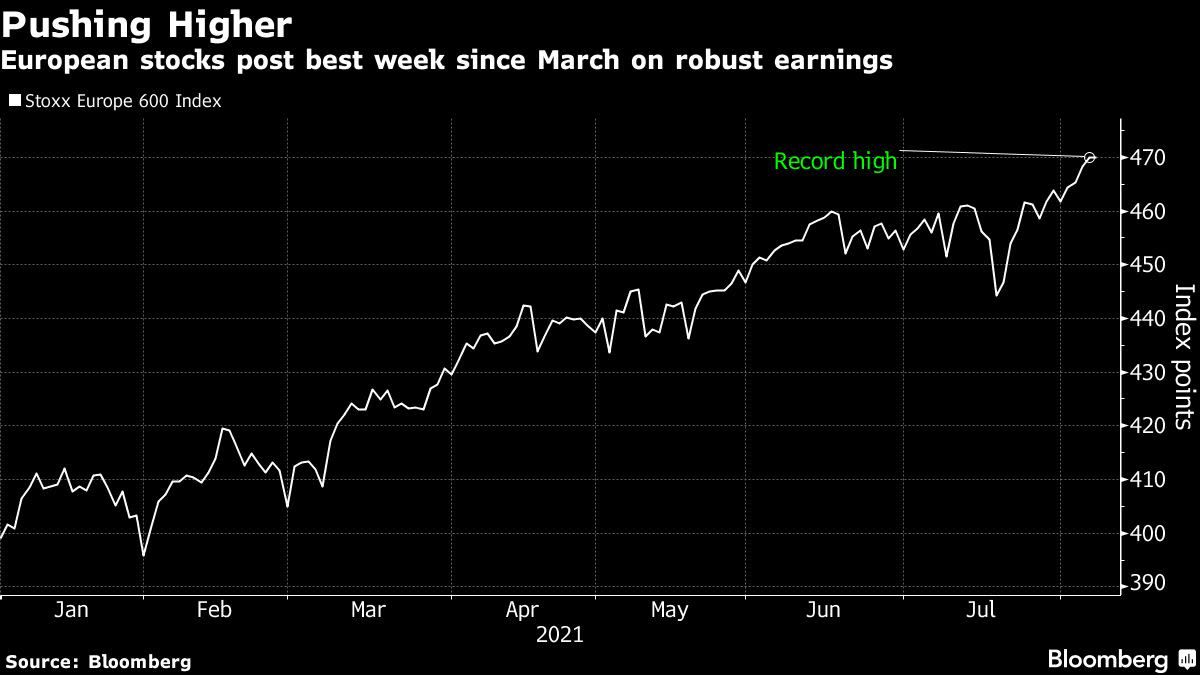 The Stoxx 600 Europe Index ended flat in London at a historical high, bringing the week’s gain to 1.8%. Banks were the best performers, with ING Groep NV advancing after profit beat expectations. Insurance stocks also surged as Allianz SE jumped the most since March after raising its outlook and announcing a new share buyback, while Prudential Plc shares gained on expectations the demerger of its U.S. insurance unit should complete soon.

Investors are weighing strong corporate earnings against the risk of the possible end of stimulus measures after data showed U.S. employers added the most jobs in nearly a year and the unemployment rate declined faster than forecast. The spread of the delta variant and concerns over China’s regulatory crackdown are also in focus.

“The employment data is starting to shine with rocketing payroll numbers,” said Richard Flynn, UK Director at Charles Schwab. “Today’s positive numbers are an encouraging sign for markets that the economic reopening has kicked into a higher gear.”

The European benchmark index has advanced the most since mid-March this week, after setting a series of five all-time highs, which is the longest streak since June. The region’s reporting season is ending on a strong note, according to Barclays Plc strategist Emmanuel Cau.

“Cyclicals, financials and energy are delivering the bulk of beats, positive guidance and surprises on payouts, and are leading the upgrades to full-year estimates,” Cau said. “This outcome helps the transition from policy/liquidity driven market to one led by fundamentals going forward.”

Among the Stoxx 600 companies that have reported results so far, 65% beat earnings-per-share estimates, according to JPMorgan Chase & Co. strategists.

Marc Decker, head of portfolio management at Merck Finck, notes that market reaction to earnings has been cautious due to such reasons as the action of the Chinese government and the delta variant.

Still, reflecting investor appetite for risk, European equity funds in the week through Aug. 4 had $700 million inflows, the largest in seven weeks, according to Bank of America Corp. and EPFR Global data.

Among Friday’s biggest individual movers, HelloFresh SE declined as much as 8.7% before closing down 2.5% after the meal-kit delivery firm cut its margin guidance.

For a daily wrap highlighting the biggest movers among EMEA stocks, click hereYou want more news on this market? Click here for a curated First Word channel of actionable news from Bloomberg and select sources. It can be customized to your preferences by clicking into Actions on the toolbar or hitting the HELP key for assistance.