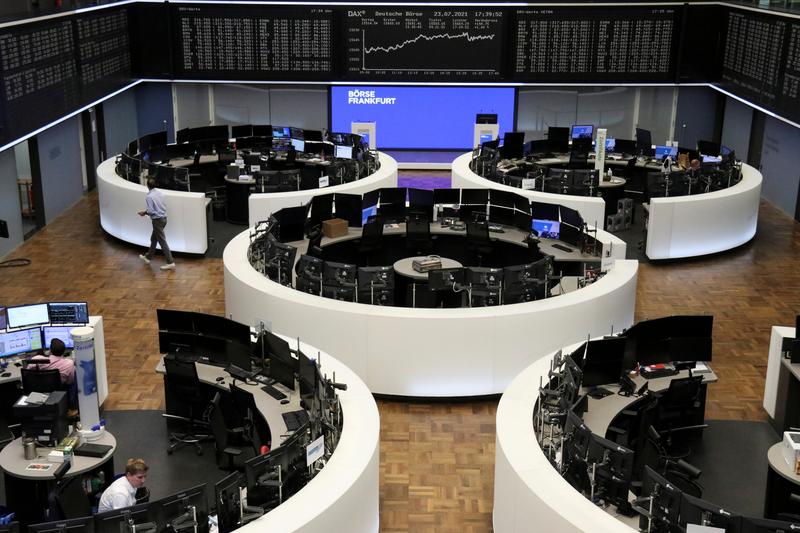 (Reuters) -European stocks eased from all-time highs on Monday, hurt by a decline in shares of Dutch technology investor Prosus on regulatory clampdowns in China.

Prosus NV, which has a 28.9% stake in Tencent, tumbled 8.8% to a more than one-year low after Beijing intensified its regulatory crackdown on the Chinese internet giant.

“The current profit taking induced in part by pressure on China’s tech is unlikely to last long as U.S. stocks should again be bought on the dip,” said Sebastien Galy, senior macro strategist at Nordea Asset Management.

Despite concerns about surging COVID-19 cases globally and rising inflation, the STOXX 600 hit a record high on Friday as strong earnings reports and dovish signs from the European Central Bank boosted appetite for risky equities.

Automakers fell on Monday. Porsche was down 1.9% as it traded without entitlement for dividend, and French car parts maker Faurecia slipped 5.7% despite raising its 2021 net cash flow target.

Europe’s largest low-cost carrier, Ryanair, rose 3.8% as it nudged up its forecast for full-year traffic on strong summer bookings.

That helped the wider travel and leisure sector to be among the few sectoral gainers on Monday.

“We continue to advocate a strong weighting towards Europe,” equity strategists at Jefferies wrote in a note.

“The DAX is underperforming after the latest IFO survey appeared to suggest that the German economy is starting to slow in the wake of rising costs and Delta variant infections,” said Michael Hewson, chief market analyst at CMC Markets.

Reporting by Sruthi Shankar and Shreyashi Sanyal in Bengaluru; Editing by Sriraj Kalluvila and Timothy Heritage