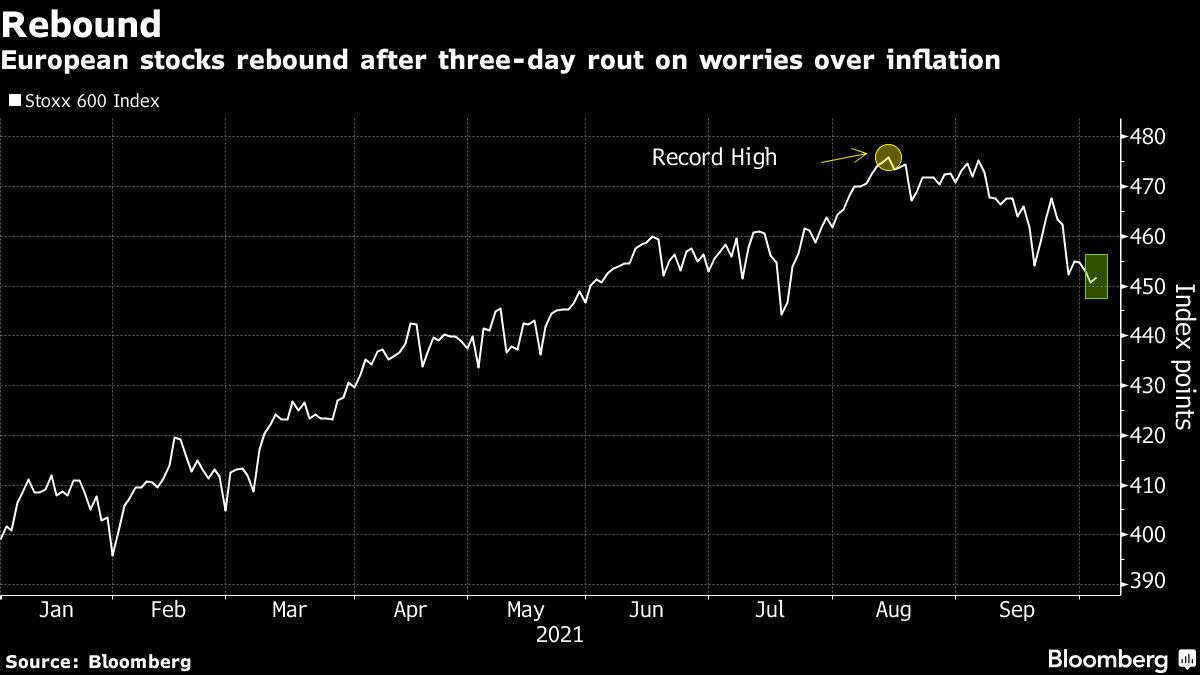 (Bloomberg) — European stocks rose the most in more than two months on Tuesday, with technology and banking shares leading the rebound as investors stepped in to buy the dip in risk assets.

The Stoxx 600 Index closed 1.2% higher, the biggest jump since July 21, with Infineon Technologies AG leading a tech sector recovery after the chipmaker forecast that its revenue will expand next year. A 1.6% gain in the Nasdaq also helped boost the sentiment. Banking stocks, which benefit from higher bond yields, were the top-performing industry group and surged the most since March.

READ: Banks May Be the Best Hedge Against Rising Yields: Taking Stock

The past month has been turbulent for stocks, with European equities slumping to the lowest level since late July on Monday, as the prospect of higher inflation has fueled concerns about earnings, while rising bond yields triggered a rotation out of more expensive sectors like technology. Since touching a record in August, the Stoxx 600 Index has declined about 4% amid concerns about tapering, Chinese growth and the energy crunch.

The gauge shrugged off a survey on Tuesday showing that a spike in inflation in the euro area has started to weigh on the economy, with growth momentum in the region’s service sector slowing last month.

Investors still see reasons for optimism, with Hani Redha, a portfolio manager at PineBridge Investments, saying that European equities look attractive from a valuation standpoint. Redha says the region’s stocks are set to benefit from the European Union’s Recovery Fund, as well as economies reopening and progress with vaccinations.

“In the last month or so, as markets have been weak, Europe has actually held up relatively well, compared to what it would normally do,” Redha said by phone. “I think that’s a sign that the market can see that Europe has some positives that support it for next year.”

Strategists at the BlackRock Investment Institute are relaxed about the recent spike in Treasury yields, saying that they have been too low given the broadening economic reopening, and this would end up being corrected.

“Markets have been jittery after an extended run higher in risk assets,” strategists led by Jean Boivin said. “We see it particularly important to have an anchor in such a noisy market environment, such as our view that we are going through an economic restart, rather than a typical business cycle recovery.”

Among the region’s top equity movers on Tuesday, Greggs Plc soared 11% to a record high after the bakery firm gave a trading update, while Electricite de France SA rallied 5.5% to the highest since January after Morgan Stanley raised its price target on the French utility. GN Store Nord A/S slumped 7% after cutting the full-year outlook for its hearing-aid unit due to delays.