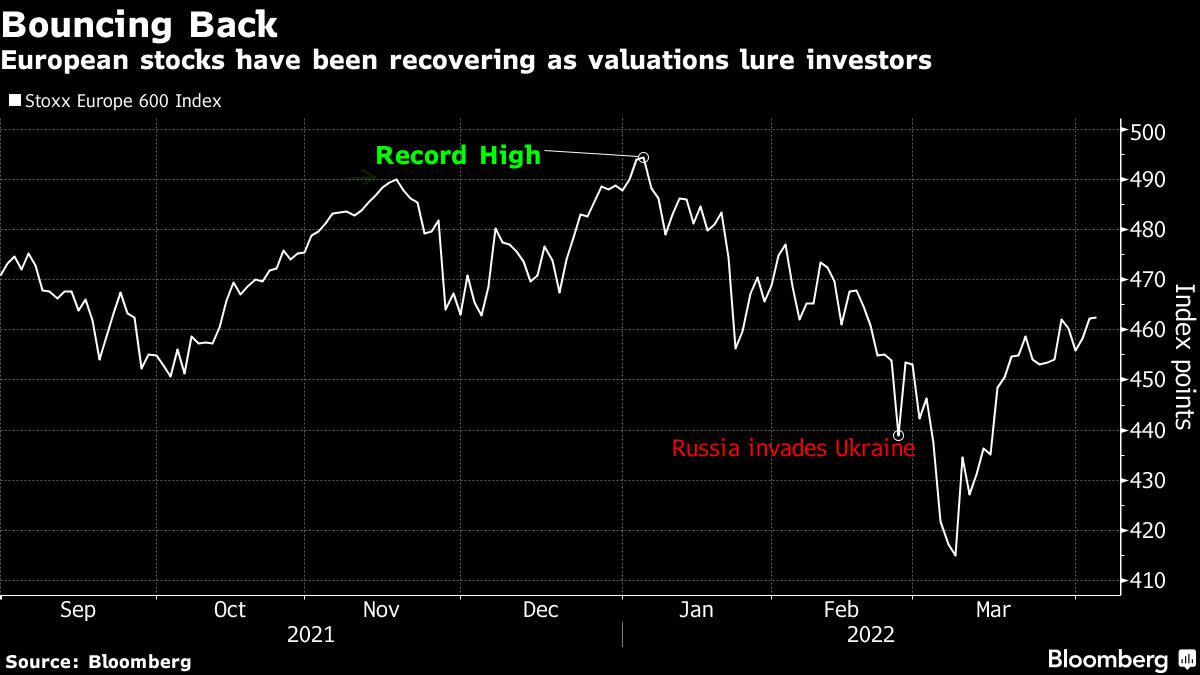 The Stoxx Europe 600 Index added 0.2% by the close in London, with utilities, miners and energy sectors outperforming. Automakers and technology were under pressure as the Nasdaq 100 fell. The FTSE 100 index outperformed, closing at the highest level since Feb. 11.

France’s CAC 40 Index in the meantime was 1.3% lower, lagging behind most major peers, on worries over potential political instability as far-right candidate Marine Le Pen looks likely to make it to the April 24 runoff against Emmanuel Macron after Sunday’s first round. Polls point to victory for the president, but the latest daily surveys show the gap is narrowing.

French stocks with a significant exposure to the French economy such as Societe Generale SA and BNP Paribas SA were among the biggest laggards, while construction and toll road operator Vinci SA also dropped. Le Pen has pledged to re-nationalize highways if elected.

A Stock Trader’s Guide to French Elections: Winners and Losers

“An election is never won in advance, there’s always a risk,” Kevin Thozet, a member of the investment committee at Carmignac, said in a phone interview. “It’s very difficult to make predictions in politics. A Macron victory is still the most probable outcome but there will be volatility in the meantime.”

European stocks have erased the selloff fueled by the war in Ukraine, with investors attracted by lower valuations and optimism that economic growth can continue. Still, tighter monetary policy and surging inflation pose risks to the equities rally.

The Derating of Cyclicals Might Have Gone Too Far: Taking Stock

Germany, which had previously blocked efforts to embargo Russian energy, is ready to consider a Russian coal ban and is in discussion with the EU about the timing of such a move, according to a German official with knowledge of the discussions.

“Central bank actions and the war stay on top of investors’ minds, with the main question being how rising inflation will affect economic growth and what policy makers will do,” said Nieves Benito, head of fundamental research at Santander Asset Management. “If Germany goes ahead and cuts Russian gas, we could see higher uncertainty and a greater impact in the region.”

The Spanish asset manager has slightly reduced risk and is looking at entering companies with strong fundamentals.

Among individual moves, Vestas Wind Systems A/S jumped the most since March 8 after Credit Suisse raised its recommendation to outperform, while ams-OSRAM AG declined the most since early November after unveiling targets that analysts note point to muted growth.

Airbus SE fell 4.4% after an undisclosed holder was looking to raise about 358 million euros ($393 million) by selling shares in the planemaker.