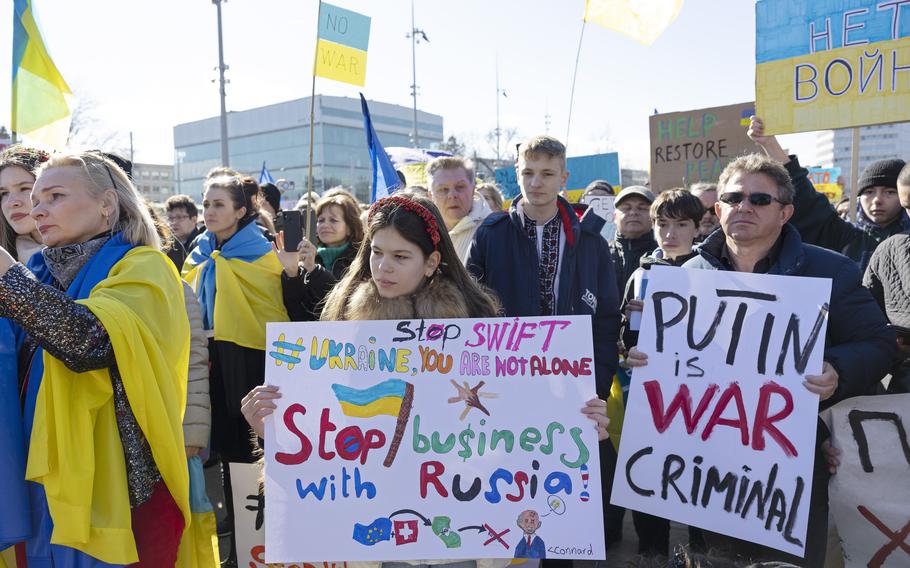 PARIS — As U.S. and European leaders pondered how far to go in sanctioning Russia for its attack on Ukraine, their attention shifted to the most divisive — and potentially most severe — weapon at their disposal on Friday. French Finance Minister Bruno Le Maire called it a “financial nuclear weapon.”

He was talking about SWIFT — short for the Society for Worldwide Interbank Financial Telecommunication — a messaging network connecting banks around the world. The Belgian-based consortium links more than 11,000 financial institutions operating in more than 200 countries and territories, acting as a critical hub enabling international payments. Last year, the system averaged 42 million messages a day.

Whether to cut Russia off from SWIFT has become one of the first points of serious Western division in this crisis, after the European Union, a block of 27 nations, had for weeks demonstrated unity.

Before the invasion, Western nations promised a punishing regime of sanctions that President Joe Biden said would be “swift and severe.” In Europe, it remained difficult Friday to gauge the swiftness or the severity or to determine exactly which countries were doing more or less because the punitive actions are a work-in-progress. European Council President Charles Michel said a “further package” was under “urgent preparation.”

European Union foreign ministers agreed Friday to freeze the assets of Russian President Vladimir Putin and Foreign Minister Sergey Lavrov, the first time the two men have been targeted personally by such measures, but details on other measures were still unclear.

Eastern European countries and France have backed cutting off Russia from SWIFT, which would make it more difficult for Russian entities to process transactions and could hobble the Russian economy’s ability to do business beyond its borders.

But the idea has encountered resistance from some corners of Europe that remain concerned about the fallout on their own economies. Biden cited those European hesitations as the reason on Thursday that SWIFT was not part of the sanctions plan.

Josep Borrell, the E.U.’s foreign policy chief, acknowledged Friday that the bloc’s member states have so far reached no agreement on SWIFT. “Maybe it can be adopted in the following days, it will depend. We are exploring all possibilities,” said Borrell.

Three European officials, speaking on the condition of anonymity to discuss sensitive matters, said Italy and Germany are among the countries that have so far resisted the move. Both countries have strong trade ties to Russia, with Germany being particularly dependent on Russian gas.

But by Saturday, Italy’s government said it was open to cutting Russia off. After a call between Italy’s prime minister Mario Draghi and Ukrainian President Volodymyr Zelensky, the Italian government said it “will fully support the European Union’s line on sanctions against Russia, including those within the SWIFT framework.”

Speaking on Friday evening, Germany’s Finance Minister Christian Lindner said “we’re open” to the idea of cutting off Russia from SWIFT. “But one has to know what one is doing,” he cautioned, saying Europe needed to pose the question to itself whether the step may “prompt Russia to stop its gas deliveries, because they can’t be paid anymore.”

“And if those gas deliveries end, what will be the impact on our supplies?” he said.

Russia would not be the first nation to be disconnected from the international network. Iranian financial institutions lost their access to it in 2012, after the European Union imposed sanctions on the nation over its nuclear program. But Iran was also a far less significant trading partner for E.U. nations than Russia is.

Iranian banks regained access after the country signed onto a 2015 agreement to limit its nuclear activities but were cut off again in 2018 after the Trump administration scuttled the deal and pressured SWIFT to follow suit.

Russia has been bracing for the possibility it could be cut off since it invaded Ukraine’s Crimean peninsula in 2014 and some called for such a reprisal. In response, Russia launched an alternative network, dubbed the System for Transfer of Financial Messages. But experts say it remains an inadequate replacement. By the end of 2020, the system included only 400 participants from 23 countries, according to the Russian state-owned Tass news agency.

Ukraine’s Foreign Minister Dmytro Kuleba said Friday he had pressed Secretary of State Antony Blinken “to use all US influence on some hesitant European countries to ban Russia from SWIFT.”

Pressure also appeared to mount from within Europe. British Prime Minister Boris Johnson has been among the biggest supporters of such a move, the Financial Times reported Thursday. France has also become increasingly vocal in its support.

Standing next to his German counterpart, French Finance Minister Le Maire initially said Friday morning that cutting off Russia from the global payment system would be an option of “last resort.” But by the afternoon, he clarified that “France is not among those countries” that have “expressed reservations” about the move. He cited the diplomatic obligations of France, which holds the presidency of the Council of the E.U., as the reason for the country’s initially vague position.

“When you have a financial nuclear weapon in your hands, you must think before using it,” he said.

On Thursday, Biden had sought to portray a SWIFT cut off as a limited sanctions step, saying “the sanctions we’ve imposed exceed SWIFT.”

Those penalties targeted Russia’s tech and financial sectors, including barring the nation’s 10 largest banks financial institutions from processing payments through the United States. And the Biden administration is zeroing in on Russian oligarchs as well, with Biden saying more sanctions were probably on the way. The president said it would take time for the sanctions to work, indicating their impact should be evaluated in “another month or so.”

But Jacob Kirkegaard, senior fellow at the Peterson Institute for International Economics, predicated Western powers will move within days to banish Russia from SWIFT. “The domestic political pressure on these leaders is building rapidly, because it becomes a symbol of standing with Ukraine,” he said. “The governments can’t afford to be seen as being on the wrong side of history for very long.”

The economic cudgel alone has rarely succeeded in convincing rogue nations to alter course, said Charlie Steele, a former chief counsel for the Treasury Department’s Office of Foreign Assets Control. “Russia is so embedded in the world economy,” he said, “we’re going to have to see how effective the economic power of the U.S., which gives the sanctions their force, will be and how much pain Russia can tolerate.”