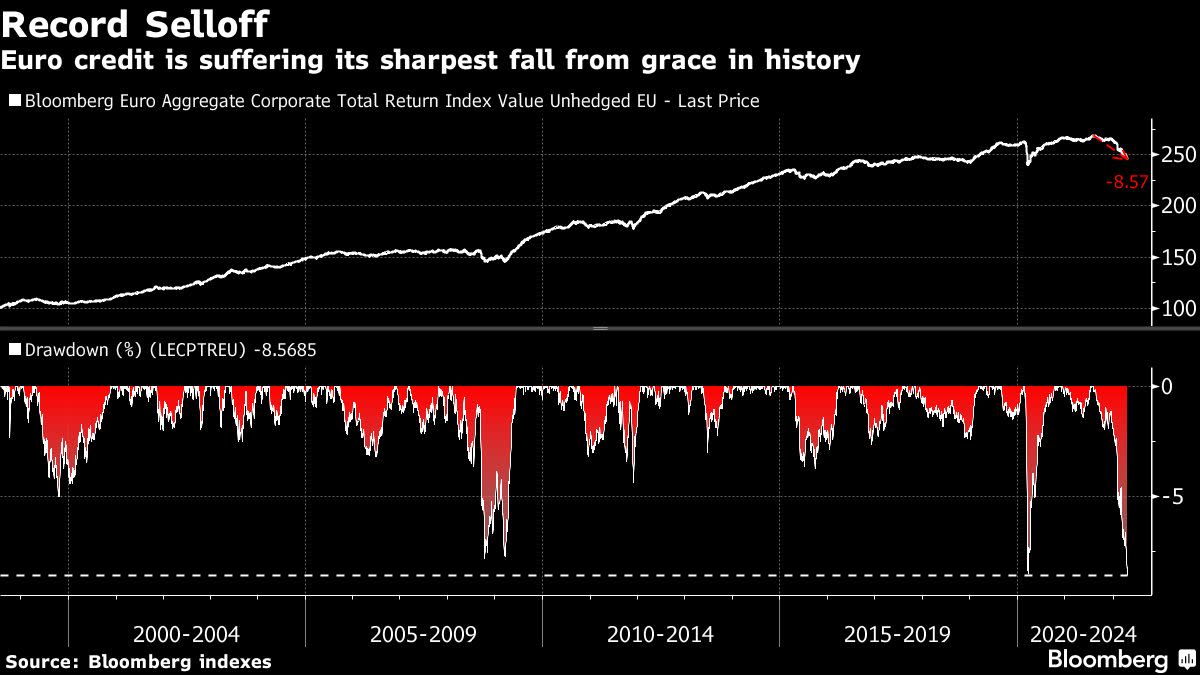 A 2.6-trillion-euro ($2.8 trillion) gauge of total returns in euro-denominated high-grade debt is down 8.6% since a recent high in August. That’s the steepest peak-to-trough plunge on record, surpassing the slump at the start of the coronavirus pandemic and the global financial crisis more than a decade ago, according to Bloomberg’s index, which has a one-day lag.

The losses come as major central banks look to tighten monetary policy in a bid to tackle runaway inflation. Meanwhile, disruptions to supply chains caused by Russia’s invasion of Ukraine and concerns about a slowdown in economic growth are hitting credit investors from all angles.

“It is not a good time to be a fixed income investor. Losses have been quite material, and the underperformance of credit versus equities is something to take note of,” said Daniel Ender, a credit analyst at Actiam NV, which oversees 22 billion euros. While the Dutch asset manager’s flagship credit fund has performed better than the index tracking market performance, losses in 2022 have wiped out the bulk of the prior five years of gains.

Total returns suffered another blow on Thursday, as several European Central Bank governing council members said an increase in policy rate is possible this year. Belgian central bank governor Pierre Wunsch even said policy rates could rise above zero before the end of 2022.

The ECB’s deposit rate has been negative since 2014 and currently stands at minus 0.5%, with traders now betting on three 25-basis-point hikes this year. Meanwhile, the central bank has guided that new bond purchases will end at some point in the third quarter. The ECB has been buying corporate bonds since 2016 and now holds more than 373 billion euros of company debt through two different QE programs.

And central bank action is coming amid a backdrop of mounting concerns about the health of the global economy. Citing aggressive tightening, Deutsche Bank AG downgraded global growth forecasts in a report on Wednesday and urged investors to “prepare for a hard landing.” The lender now expects a U.S. recession by late 2023 and a slowdown in Europe’s post-virus recovery.

Maria Staeheli, a portfolio manager at Fisch Asset Management, says that most of the correction seen in Europe’s corporate bond market “has been warranted,” given the significant risks faced by the asset class. Still, there are some positives, with “decent” corporate health and euro credit being a “lesser evil” than U.S. dollar credit due to rising dollar-hedging costs. Fisch oversees 11.6 billion Swiss francs ($12.2 billion) in assets.

The drop in Europe’s safest corporate bonds is a dramatic turn from last August, when the notes yielded just over 0.1% on average, a record low. Investors buying bonds now to hold them until maturity would expect to make more than 1.9%, or more than 2.5 times the average yield over the past five years.

And investors are fleeing in droves: high-grade funds in Europe have seen outflows of almost $50 billion since the start of the year, according to EPFR Global data cited in a Bank of America Corp. report.

Meanwhile, some of the oddities caused by years of central bank support are disappearing. Negative-yielding bonds, which are guaranteed to lose money if held to maturity and amounted to 1.3 trillion euros just eight months ago, have all but vanished.

All this hasn’t translated to widespread concern about corporate failures. Losses in the junk-rated part of the euro credit market have been much tamer in comparison and dwarfed by many previous bouts of weakness.

And given how bearish sentiment already is in credit, the bar for further selloffs could be rising.

“All positioning indicators suggest the market is trading short. When it’s this extreme, it sets a high hurdle for what is ‘bad news’,” said Viktor Hjort, global head of credit strategy at BNP Paribas SA. “This is the right price for credit and volatility may be surprisingly low for some time.”