Countries outside of Europe, and especially in the Americas and sub-Saharan Africa, had to pay more for a technology the longer they wait. This meant that they’re in a hectic struggle against time, as the Renaissance Europeans grow in power.

These are some nice properties of the new system over the old:

Asian nations will find themselves getting hit by a +50% tech cost from Renaissance earlier than they would in 1.31, but as they get further behind, their tech cost will stabilize even if they don’t develop for institutions. European nations won’t be affected as much, but those at the forefront of technology will notice the increased tech cost, making institutions more relevant in this region than previously.

When changing the code for this, it turned out Paradox based a lot of seemingly unrelated things on countries’ “tech cost from institutions”, most of which were simply translated from the pre-Rights of Man “technology group” system. For example, joining a Trade League requires having at most +200% tech cost from institutions. Who would have known? You can find a lot of these addressed in 1.32’s changelog. 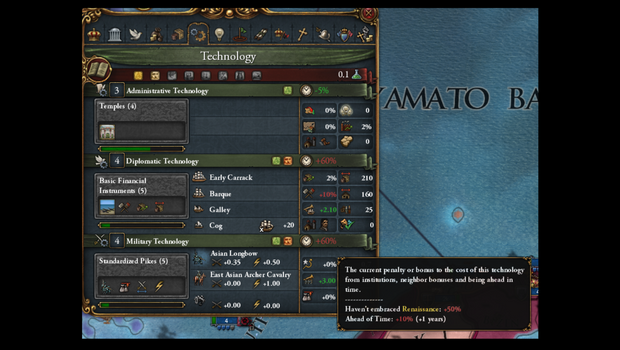 Now, with the new system in place, Institutions will have a bigger impact, but in a different sense. The spread of social movements and such will happen more organically, and the evolution of technology will be more balanced, hopefully.