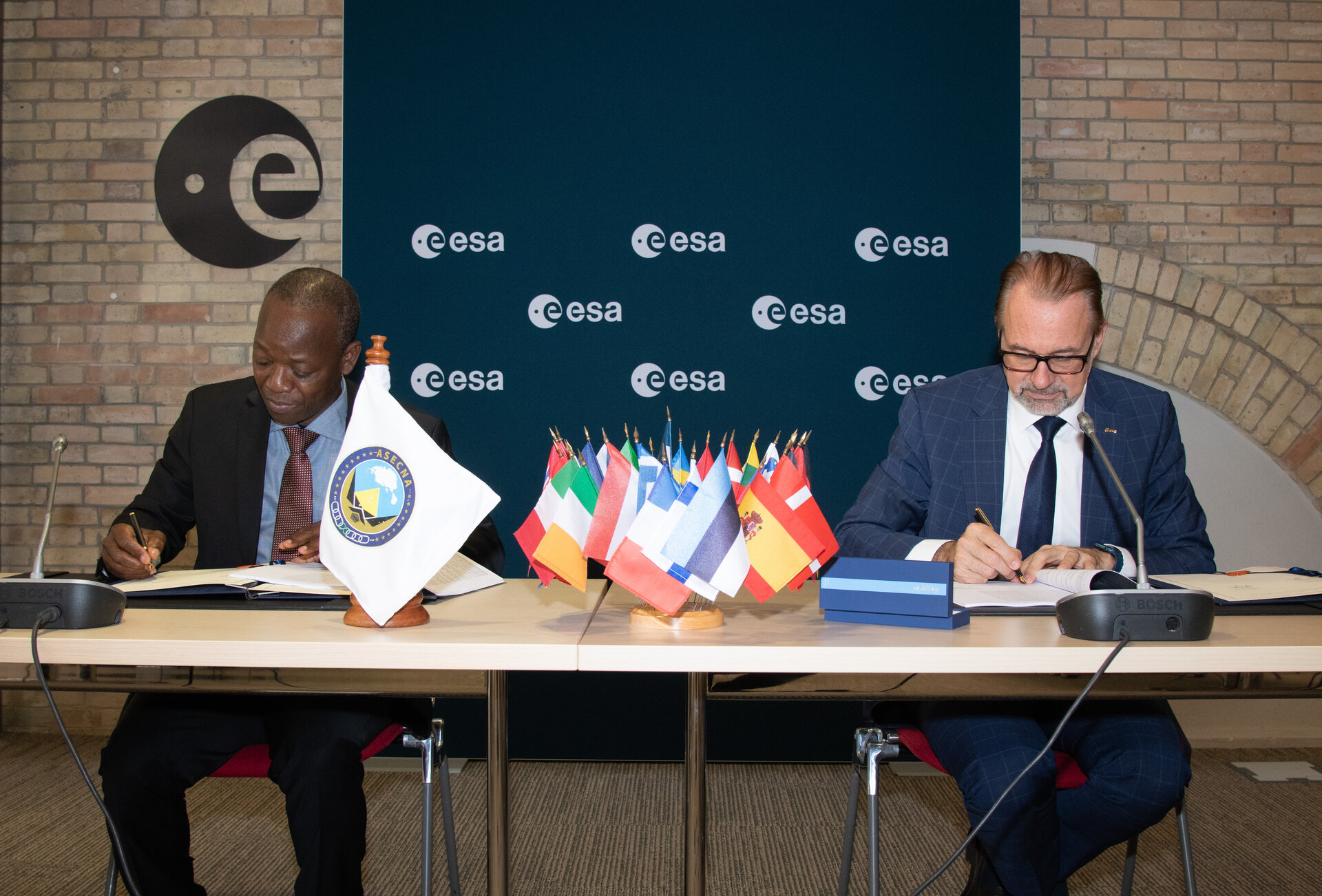 European technology that allows satellite navigation signals to safely guide aircraft down for landing in the majority of Europe’s airports will now be put to use across Africa and the Indian Ocean. ASECNA, the Agency for Air Navigation Safety in Africa and Madagascar, and ESA today signed an agreement to deploy a Satellite-based Augmentation System (SBAS) across a service region of more than 16.5 million sq. km, one and a half times the size of Europe’s coverage area.

ESA will provide technical support to ASECNA   based on Europe’s EGNOS technology and using the Galileo satellites. The system initial operational capabilities are projected to enter into service from 2025.

ESA Director General Josef Aschbacher comments: “I welcome this exciting new partnership with Africa. International cooperation has always been an ESA priority; space technology has the potential to improve everyone’s lives, and by working together we get to make that happen. EGNOS technology – designed, developed and demonstrated in Europe – will have its clear safety, environmental and economic benefits extended to African airports, airlines and passengers.”

ASECNA Director General Mohamed Moussa remarks: “The implementation of satellite-based augmentation infrastructure will represent a huge step forward towards the unification of the African airspace. Airspace users will benefit across the continent from the most advanced navigation services and will significantly improve the safety and efficiency of their operations, and reduce their environmental impact. This service is sufficiently accurate and reliable to guide aircraft for critical flight operations will also be valuable across many other important sectors, such as land and maritime transport, precision agriculture, drone navigation, mapping and surveying.”

ASECNA Chairman of the Board Jean Lamy adds: “This programme is part of the Africa-EU strategic partnership on satellite navigation. It provides a solution for the implementation of the navigation and positioning component of the Space Policy of the African Union. It will support the development of a continiuum airspace purpose of the single Sky for Africa Project (CUPA Project) developed by ASECNA and which contribute to the African Union’s Single Air Transport Market initiative (SAATM)”.

ESA Director of Navigation Javier Benedicto explains: “Together with Galileo, EGNOS is Europe’s other satellite navigation system, which is today in routine use at around 367 European airports and helipads. Through the use of EGNOS, satellite navigation signals become sufficiently accurate and reliable for all kinds of ‘safety-of-life’ uses. ESA, as the original designer of the EGNOS system, is well-placed to advise on the design and establishment of a new augmentation system with our ASECNA partner.”

Didier Flament, overseeing EGNOS for ESA, adds: “Building on past knowhow, this new system will deliver positioning with metre-level accuracy and with a high level of Integrity with a progressive coverage of the continent.”

Louis Bakienon, Director of the ASECNA SBAS Programme, notes: “SBAS services will enhance navigation operations for all phases of flight, from en-route down to precision approaches, and surveillance operations as well, as providing a source of position for terminal and surface surveillance.”

Julien Lapie, Manager of the ASECNA SBAS programme says: “The ASECNA SBAS programme primarily aims to provide, through a self-sufficient infrastructure, airspace users with advanced navigation services to enhance significantly flight safety and efficiency, reduce their environmental impacts and improve airport accessibility. This programme is a key enabler to the implementation of the Space Policy and Strategy of the Africa Union, and is recognised by the International Civil Aviation Organisation.”

EGNOS, the European Geostationary Navigation Overlay Service sharpens the accuracy of GPS signals over European territory up to metre-scale precision while also giving a real-time‘integrity’ – or reliability – level of the signals and of the final corrected position thanks to EGNOS. The current EGNOS system relies only on US GPS signals but an updated version is being prepared for implementation later this decade (by 2028) – EGNOS v3 – which will also utilise Galileo signals, further increasing its accuracy and robustness. Moreover, this second generation will also provide an increased level of resilience to security (in particular cyber security) threats.

The current EGNOS allows aircraft to be guided safely down in any visibility to within 60 metres of height from the runway while the new EGNOS V3 aims at delivering a future capability of an auto-landing service (a first feasibility demonstration of this capability was performed in November 2019 with an Airbus A350 at Toulouse Airport).

The Satellite-based Augmentation system of ASECNA will provide the same levels of services, based on an fully-fledged African infrasctructure, composed of a ground segment (reference stations, mission control centres, uplink stations) and a space segment.

ASECNA signed an international agreement with the European Union in 2018 on satellite navigation, and is benefiting from funding and access to the EGNOS technology. ESA will deploy a team of around ten experts, providing technical support focused on ground infrastructure for the SBAS while French space agency CNES will advise on engineering of the demonstrator, the space segment and performance.

Thank you for liking

You have already liked this page, you can only like it once!