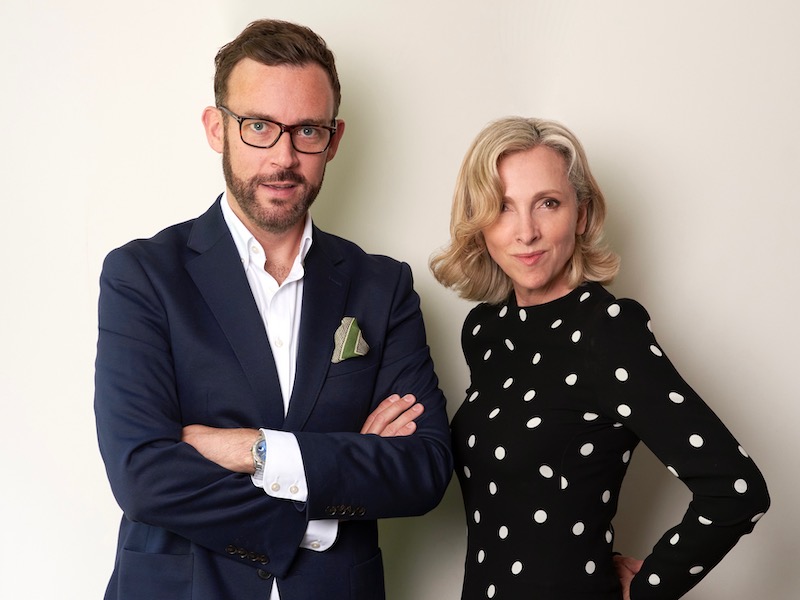 BERLIN — Brunswick Group has appointed Andreas Nick as a partner in Germany. He brings three decades of international experience in public policy, investment banking and academia to the firm, including as vice president of the Parliamentary Assembly of the Council of Europe (PACE) and head of the German delegation between 2018 and 2022. He was a member of the German Bundestag from 2013 to 2021 and spent more than 15 years in investment banking. At Brunswick, Nick will advise German and international clients on public affairs matters and financial situations, including complex private and public market transactions.

LONDON — Luxury brands specialist Luchford has appointed Peter Murray (pictured, left) to the new position of managing director and COO, working alongside founder and CEO Kelly Luchford (right). Murray started his career as an advisor in the government of Tony Blair. He was appointed head of government affairs at international design consultancy Arup, before serving as director of communications at Metro bank. Most recently, Murray was head of corporate affairs at Grayling, and was also director of corporate affairs at Cicero.

CARDIFF — Media and strategic communications professionals Rod Cartwright and Alex Aiken have been appointed as visiting fellows by the Centre for Journalism and Public Communication, Cardiff University’s centre of excellence for media practice. Executive director for government communication Aiken and crisis communications specialist Cartwright will join the university as fellows for the next three years to support the School of Journalism, Media and Culture (JOMEC) as it prepares to launch its new strategic vision. Both fellows will contribute their expertise in data-driven communications, behavioural insight and combatting misinformation to help shape the next generation of journalists and communicators at the school.

LONDON — Former No.10 broadcast specialist advisor Ed Oldfield has returned to Hanbury Strategy, where he worked before joining Government. Oldfield will be working as an associate director in the strategic and corporate communications team.

LONDON —  BT has appointed Giles Barron as its new principal of external communications for Digital, a one-ear-old division tasked with driving BT’s digital transformation alongside the development and delivery of innovative products, platforms and services. Barron leads a new external communications function that has been set up to enrich stakeholders’ understanding of BT’s innovative Digital agenda and how it will drive positive impact for the business, as well as supporting BT in attracting digital talent. Barron joins BT following 11 years at integrated communications consultancy Diffusion, where he lheaded up the business and technology division of the company. Prior to this, he spent five years at Hotwire. Barron will report to Tom Engel, director of external communications, and Armand David, who joined from Brands2Life as corporate affairs director for BT’s Digital Unit in January 2022. Catrina Adams, recently arrived from HTC, joins the team as communications manager and will support Barron with Digital’s external affairs.

LONDON — Global healthcare communications consultancy 90Ten, part of Envision Pharma Group, has promoted director Niamh Mangan to the role of managing director of 90Ten Medical. In addition, the agency has bolstered the senior management team on the communications side of the business, with the promotion of Victoria Dacker to senior associate director and the recent appointment of Harriet Middleton as senior associate director from MSD.

LONDON — Social purpose strategy specialist agency Purpose Union has hired Rebecca Baron as a director to strengthen its advocacy offering. Baron joins from Ben & Jerry’s, having recently led the ice cream brand’s activism work across Europe. In her new role, Baron will use her experience in strategy, coalition building and narrative framing to help brands and NGOs run effective campaigns on a range of issues.

LONDON — Battenhall has appointed Elise Pearce as senior associate director, to expand the agency’s digital and innovation leadership. Pearce joins from 3 Monkeys Zeno, where she was digital associate director. She has worked with clients including Lenovo, Motorola, Castrol, Campari Group and Mattel, and will head up a portfolio of client teams across the UK and US, with a focus on social strategy, digital innovation, data and insights, and influencer marketing. Jonny Atter, who leads Battenhall’s data and insights team, has also been promoted to senior associate director after seven years with the agency, which had revenues of more than £6 million last year.

LONDON — Technology public policy consultancy Taso Advisory, which works with clients including Glassdoor, Nextdoor, and Niantic, has hired Lulu Freemont as a director from techUK, the trade association for digital technology in the UK, where she was head of digital regulation. In her new role at the three-year-old agency, Freemonth will support clients on all areas of UK technology policy.

LONDON — Firstlight has hired Peter Carson as an account director to bolster its digital team. Carson joins after a stint as global social media manager at AlphaSights and four years at Nelson Bostock, where he ran digital PR programmes for technology clients including Canon, Toshiba and Equinix. He joins firstlight’s digital lead Neil Young to run the agency’s digital work for clients including the Climate Crisis Advisory Group (CCAG) and eBay.

BRUSSELS — Global public affairs network FIPRA International has appointed Erik Jonnaert as its new chairman, succeeding Robert Madelin who was chair for the past five years; Robert Madelin continues to stay on as a senior strategist and special advisor to FIPRA’s clients, and Laura Batchelor continues as managing partner. Jonnaert led communications and public affairs for Procter & Gamble in Europe and Asia, before leading the European automobile industry as secretary general of ACEA. He has also served as chairman of the European Centre for Public Affairs. Jonnaert will continue as director of the Mont Blanc Circle for Public Affairs, a think-tank of senior government relations leaders.

MILTON KEYNES, UK — Playtime PR, the specialist toys and games PR agency, has undergone a leadership restructure. Following the appointment last year of Ceriann Smith as director of strategy and creative to work alongside Founder, Lesley Singleton, the agency has appointed Mary Bobroff, Louise Hathaway and Chrissie Williams as joint heads of consumer campaigns. All three have freelanced with the agency for a number of years. Independent consultant Amy Hayward-Paine also joins the team in the new role of head of social media. Playtime clients include Tamagotchi, Sylvanian Families, Aquabeads and Schleich.