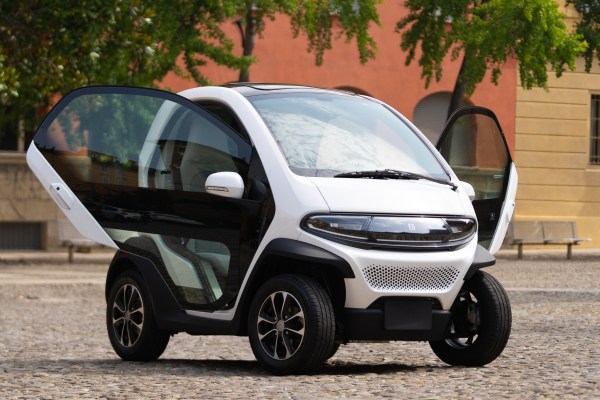 Eli Electric Vehicles, an early stage compact EV manufacturer, announced the start of production on its flagship Eli Zero, a micro “neighborhood electric vehicle” that is built for city commuting. The company plans to roll out small batches of the two-seater EV to distributors across 13 European countries over the next few months with a starting price of $11,999.

Micro-electric vehicles are on the rise with other compact quadricycles coming to market recently, including the Renault Twizy, the Citroën Ami, the tilting Triggo EV and the Squad Mobility solar-assisted car. In terms of pricing, the Eli is at the higher end of the spectrum along with the Twizy at a starting price of around $16,000. For comparison, the Ami costs around $6,000 and the Squad car costs $6,790.

While Eli is based in Los Angeles, its manufacturing partner is in China, and ongoing geopolitical tensions are part of  the reason the company is pursuing a European strategy initially. The varied laws per state on what maketh a street legal vehicle also make it difficult to go to market in the U.S. first, according to Marcus Li, CEO and founder of Eli. In Europe, the Zeros are street legal and there is already a culture around smaller, compact cars that don’t go too fast.

“In a lot of European cities, for example in Paris, they now have very strict legal speed limit of 30 kilometers per hour (19 mph), and I think we see that being a trend in European cities like Vienna and Amsterdam,” Li told TechCrunch.

The Zero, which is built of recyclable polypropylene and high-strength aluminium, has a top speed of 25 miles per hour. It’s about 7 feet long, 4.5 feet wide and 5 feet high with a storage capacity of 160 liters. The batteries have a 5.8 kWh capacity, a range of 50 miles and can charge from 0 to 100 percent in 2.5 hours at 220 volts.

The micro-vehicle also has power-assisted braking and steering, a rear camera, a parking sensor and other internal features like a USB charging port, cup holders, heat and cooling, a tiltable sunroof and a 7 inch dashboard display. The basic colors are pearl white and silver, and the premium colors available are graphite and baby blue.

Eli also recently announced its equity crowdfunding campaign via StartEngine platform. At the time of publishing this article, the company had raised $224,705 that it will use to fund further production. Li said the company has more reservations than it does vehicles at the moment, which he reckons is a good problem to have.

Eli had previously raised around $1.4 million on StartEngine’s platform and to date, has raised over $6.5 million. Li said the company had attempted to seek VC funding last year, but VCs only wanted to invest if Eli would use its vehicle for car sharing.

“At some point, to be honest, we did think about pivoting to car sharing because that’s just the feedback from most institutional investors,” said Li. “Their business model is a little different from conventional hardware companies in terms of return on investment, and they would have preferred that we go more into a car sharing and high valuation model to see a return three years down the road.”

Li said one investment group was ready to invest if Eli agreed to do the operations of a car sharing platform themselves, but this was just before the pandemic and ultimately, he’s glad the company didn’t pivot in that direction.

“We’re taking a very traditional approach to sales,” said Li. “We’re not doing B2C. We’re selling through an established distributor called KSR Group and they have their launch strategy first to Austria, Germany and Switzerland and then to more countries in Europe.”

Using a distributor helps Eli as an early stage startup so they can outsource things like servicing, deliveries and test drives, says Li.

“Our goal is to revolutionize urban trips, connect cities and communities in a new way that reduces congestion and pollution.,” said Li in a statement. “As urban areas continue to grow along with a rapidly changing climate, opening up a space for micro-EVs like Eli ZERO that is energy-efficient and environmentally sustainable.”