In an attempt to grow their catalog of Originals for the streaming service, Disney has announced brand new series greenlights, series renewals, and additional episodes ordered of previously announced titles — all centered around providing variety and diversity to their audience of younger viewers.

Disney seems set on proving that they are truly championing diversity, like with the recent announcement of their first-ever gay teen romance in a feature film — not just by showing more programs featuring people of color and other minority groups, but also by introducing variety in terms of style and approach.

In a report by Variety, the Managing Director of Disney Channels France, Ayo Davis, has spoken out on further driving Disney’s stance and current position in the global realm of entertainment and animation:

“The announcements out of Annecy today further cement Disney as the leader in animation. These new series present the very best from our teams at Disney Television Animation and Disney Junior. They build upon Disney Branded Television’s commitment to work with incredible storytellers, whose diverse voices not only allow our young audiences to see themselves reflected on screen but help them better navigate their world.”

Set on providing this chance for younger individuals to see themselves through worlds of imagination, Disney is adding to their narrative inventory with brand new approaches to storytelling — such as the new sci-fi animated anthology Kizazi Moto: Generation Fire. The show’s cast was announced, starring Florence Kasumba, a Ugandan-born German actress who has (and will continue) to play Ayo, one of the elite, all-female, Wakandan Dora Milaje warriors in the Marvel Cinematic Universe, and who will return in the upcoming Black Panther: Wakanda Forever (2022) later this November. 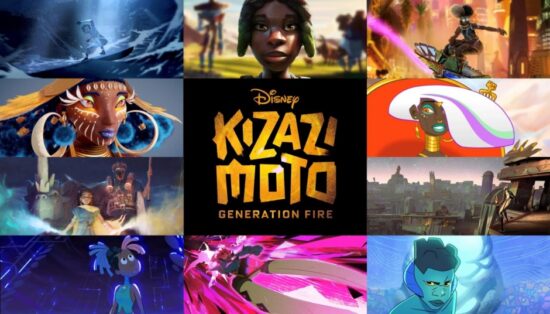 Another African-centered tale for the streaming service had its sneak peek shown at the festival, Kiya and the Kimoja Heroes, aimed at preschoolers.

Other sneak peeks included Disney Junior and Disney+’s Star Wars: Young Jedi Adventures, another series for preschool-aged kids, slated for 2023, and Star Wars‘ first foray into this age group — as well as Moon Girl and Devil Dinosaur, a Marvel series starring a super-genius 13-year-old who has a T-rex. Also previewed was the Disney Original Documentary Mickey: The Story of a Mouse.

Another highlight was the announcement of a brand new foray into a style not-yet-done before for Disney, with the series Dragon Striker, which borrows heavily from popular Japanese ‘sports anime’ tropes.

“It’s the first time we’ve done a heavily serialized anime style show in Europe for our audience. This is one of the exciting new things about what streaming enables: we know kids really like long stories and streaming is the perfect way to tell a long story in many chapters.”

However, all of this news comes on the backs of the cancellation of other extremely popular animated Disney Channel shows such as The Owl House, which barely got a third (and final) season, before being axed prematurely.

Opening up on a Reddit Ask Me Anything (AMA), showrunner Dana Terrace said in reference to the LGBTQ+ content on her show, namely Disney’s first openly gay teen relationship in a television series between main character Luz and her enemy-turned-friend-turned-romance, Amity Blight:

“While we have had issues airing in a few countries (and are just straight up banned in a few more) I’m not gonna assume bad faith against the people I work with in LA.”

“They just wanted to be done with TOH [The Owl House] and this was the perfect chance to do that. Even getting the consolation season 3 episodes was difficult, apparently. Hard to say, I wasn’t allowed to be a part of any conversations until I was just… Told. Wasn’t even allowed to present my case.”

Terrace is not afraid to explain what happened in more detail, however, adding:

“At the end of the day, there are a few business people who oversee what fits into the Disney brand and one day one of those guys decided TOH didn’t fit that “brand”. The story is serialized (BARELY compared to any average anime lmao), our audience skews older, and that just didn’t fit this one guy’s tastes. That’s it! Ain’t that wild? Really grinds my guts, boils my brain, kicks my shins, all the things. It sucks but it is what it is.”

Season 3 of The Owl House has no set release date.

Overall, it seems that Disney upper management intends to head in a different direction, by almost completely refreshing their lineup as they transition from cable television and network formats into shows they find more suited to an on-demand streaming service.

In the process, however, they don’t seem all too afraid to cut diverse programming that they find suddenly unsuitable “for their brand”.

What do you think of these new shows? Is this a wise move on Disney’s part? Share your thoughts down below!