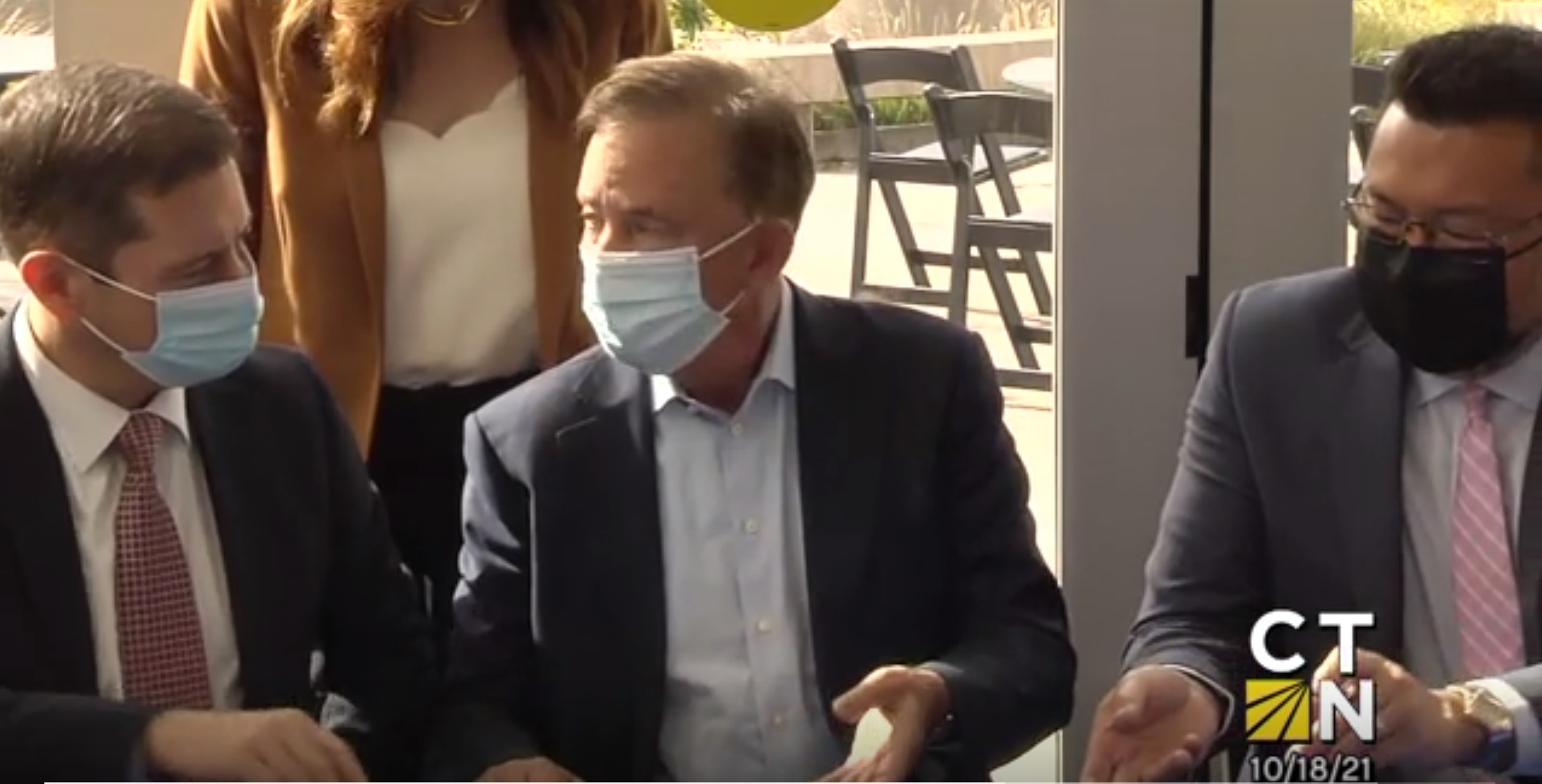 Connecticut State Colleges and Universities have joined over 200 other higher-education institutions around the country to offer a certificate program in cloud computing developed by Amazon Web Services and tailored to the tech giant’s technology.

The curriculum and the way it’s administered, through public and private colleges and universities, is one way Amazon — which dominates the cloud computing sector — is working to bolster the pipeline of skilled workers that can support the company’s brand of services across industries. AWS provides computing power to companies including Disney, Netflix, Facebook and NASA.

AWS is currently training CSCU instructors in its “no-cost, ready-to-teach, cloud-computing curricula,” which will be offered to students pursuing certifications, according to an AWS spokeswoman. The course will cost students just shy of $800 — paid to CSCU to cover instructor salaries — but state officials say they plan to help subsidize that with funding from the federal American Rescue Plan. Upon completing the course, students will need to pay for and pass an AWS-administered exam to obtain the certification. It will not count for college credit.

“There’s clear growth in the market for these skills, and we want to get ahead of the curve as much as possible,” said Niall Dammando, chief of staff in Connecticut’s Office of Workforce Strategy. Dammando said there have been more than 40,000 job postings in the state for cloud computing jobs just in the past year, and a growing number are specifically seeking candidates with AWS certifications. The state aims to have at least 2,000 residents complete the AWS Academy program, as it’s known, over the next three years. “The goal is for all of those 2,000 people to get placed in a job in Connecticut,” Dammando said, though no guarantees were made by AWS.

While the program addresses a clear need in the high-tech talent pipeline, some question the role of the state and its higher-ed institutions when it comes to such targeted skills training.

Gordon Lafer, a professor who studies workforce policy at the University of Oregon, said as higher education budgets have tightened, it’s become common for state universities to partner with industry and specific companies to offer job training.

“From a public policy point of view, it would be better to have people graduate with skills or certifications that were broader, to give people more job options and more power in the labor market,” Lafer said. 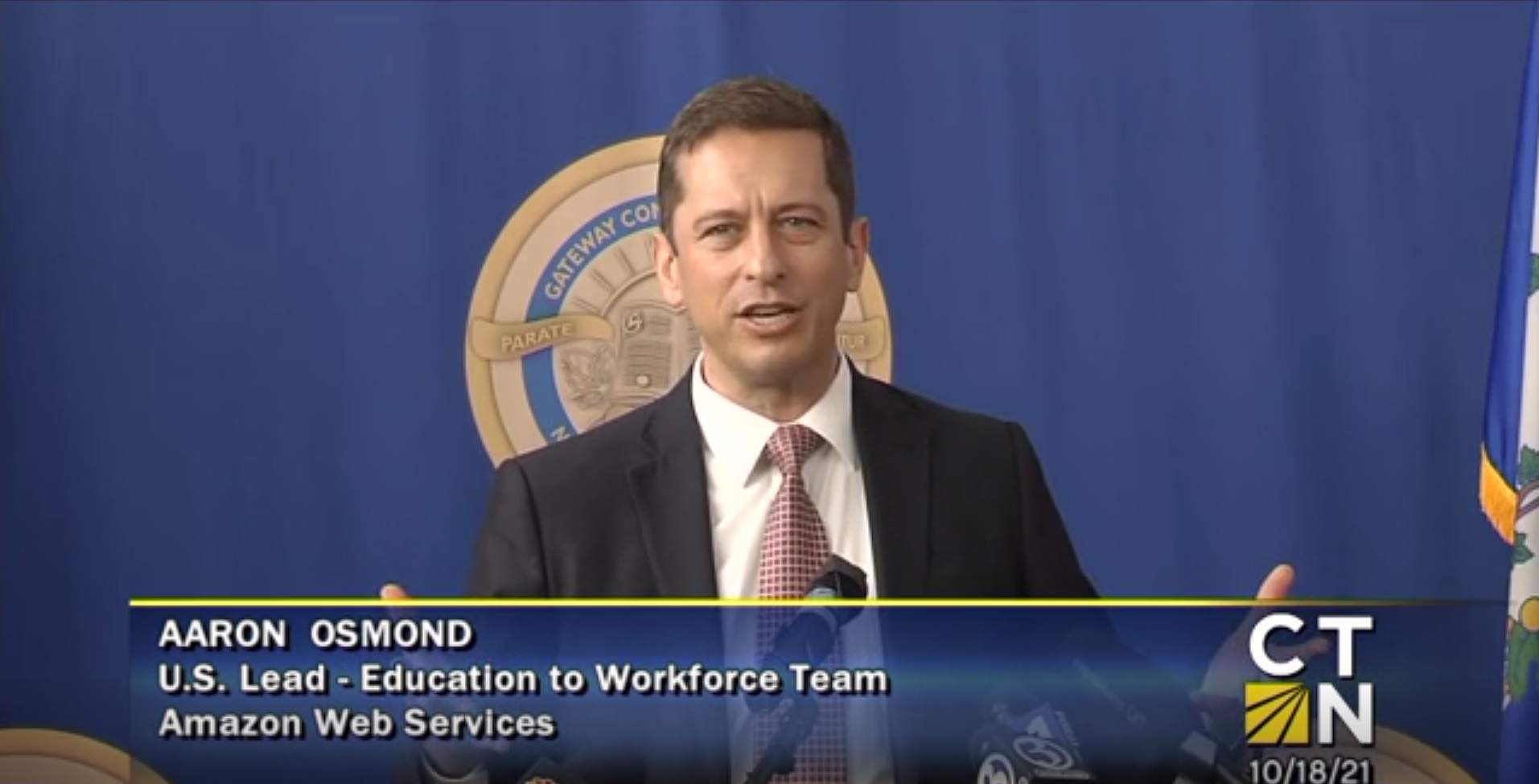 Aaron Osmond, of Amazon’s Education to Workforce Team, at the announcement of the partnership with Connecticut State Colleges and Universities to offer a certificate program.

“The tension here is between lifelong learning and so-called customized training,” said Greg LeRoy, executive director of the economic development watchdog group Good Jobs First. “Customized training isn’t necessarily a bad thing or good thing,” LeRoy said, but problems arise when state schools “become an extension of a company’s HR department, and the company is really just transferring its in-house training costs to the public sector.” And if education programs focus on training people in one specific set of skills, that could pressure employers to adopt technologies the workforce already knows — in this case, AWS.

But AWS has already cornered an outsized portion of the cloud-computing market, analysts say, and its tools have become ubiquitous for businesses and organizations across industries.

According to AWS, more than 86,000 students around the world have taken its AWS Academy courses. Aside from Connecticut, there are eight other statewide AWS Academy initiatives in Georgia, Idaho, Indiana, Arizona, Texas, Louisiana, Virginia and Utah. Most other states have several schools that offer the curriculum, including 36 institutions in California.

“There are hundreds of thousands of companies that are using AWS’ cloud-computing technology,” said Thomas Coley, president of the Shoreline-West region of the Connecticut Community Colleges. “They need the talent to work, keep the systems going, do programming, design the systems. By training these individuals, we provide a skill set that can be offered across multiple sectors,” Coley said. “That’s what industry wants.”

Coley said the community college is also working on a certification program with Google that it plans to offer soon. Other CSCU schools list certificate courses specific to Honda, General Motors and Cisco. And the state has partnered directly with General Dynamics Electric Boat on job-training programs for its submarine-building workforce.

Amazon has a reputation for seeking out state and local tax breaks and workforce development funds. And while the AWS Academy program doesn’t include tax breaks or financial incentives, according to Dammando, it does give AWS some clear advantages in today’s competitive high-tech labor market.

“I suspect this is not the first tech company to have dominance in some sector where they force a professional certification moat around it,” LeRoy said.

According to Amazon, the company invested $4 billion in Connecticut between 2010 and 2020, “including infrastructure and compensation to our employees.” There are four Amazon fulfillment and sortation centers in Connecticut, seven delivery stations and nine Whole Foods markets.