Some estimates suggest that the chip shortage could cost the global auto industry around €200 billion ($229 billion) in 2021 alone. Customers face a long wait to get their hands on a new car and spiraling prices. But the fallout is likely to be most keenly felt in Central Europe.

Czech car production will fall by 13% this year to around 1 million vehicles, according to the Automotive Industry Association (Autosap). The country’s major carmakers have been forced to trim production or even shut down completely in recent months as inventory lots fill up with cars missing functioning control systems and radios.

Slovak factories have also seen stoppages. The Slovak Automotive Industry Association (ZAP) says that following an 11% drop in 2020, output will not recover to pre-pandemic levels this year.

“This is a classic example of external shock and economies that are heavily dependent on autos such as Slovakia and the Czech Republic are suffering for their lack of diversification,” Richard Grieveson at The Vienna Institute for International Economic Studies (wiiw) told DW.

Output in Central Europe’s main auto producers was 20% down from January to August, according to London-based risk consultancy Capital Economics, which warns that “the situation will get worse before it gets better.” They predict that the chip shortages will trim GDP by 0.6 percentage points this year, and possibly by 1.2 percentage points in 2022.

The auto industry accounts for around 9% of Czech GDP. Putting the blame squarely on “the problems in the auto industry,” Komercni Bank economists recently slashed their forecast for 2021 economic expansion from over 4% to just 1.9%, poor progress from a 5.8% pandemic-driven contraction in 2020.

Slovakia is likely to be hit even harder given that its four car plants — Jaguar Range Rover, Kia, PSA Peugeot Citroën, and Volkswagen — make it the world’s leading car producer per capita. The country of 5 million turned out over 1 million cars in 2019.

Jaguar Range Rover warned on November 1 that “the global semiconductor supply shortages continued to constrain sales volumes and revenue” in the third quarter.

With carmaking responsible for 13% of GDP, almost half of industrial production and 46% of exports, the National Bank of Slovakia (NBS) recently made a “significant downward revision” of its GDP growth forecast for 2021 to 3.5%.

It’s no coincidence that next door, Poland is weathering the chip storm much better. The International Monetary Fund even raised its GDP growth forecast last month to 5.1%, chips or no chips.

“Specialization can be a positive,” says his colleague and auto industry specialist Doris Hanzl-Weiss. “It can help attract FDI. But it can be a threat if problems turn up.” 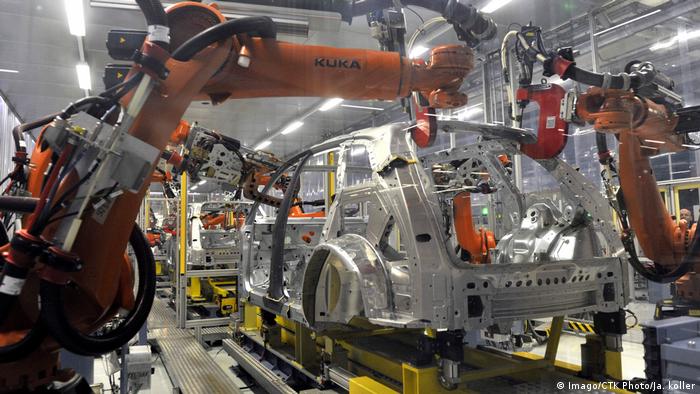 With no end in sight to supply chain bottlenecks, industry diversification seems to be the way out

Czechia and Slovakia have been chasing the positives since they started tempting global car giants and their suppliers with skilled cheap labor and good infrastructure in the wake of communism. The way their small economies were thrown open during the transition made it almost inevitable that autos would dominate, suggest some.

The strategy has allowed them to make rapid progress in catching up with countries further to the west as huge investments have installed shiny high-tech factories and huge networks of suppliers.

The Polish transformation was a little slower, and although it also has a significant auto industry, its factories also turn out white goods and furniture. Services is the biggest sector.

That’s also a lot to do with size. Poland’s 38 million people mean foreign investors don’t just build export-facing factories, but also target domestic consumers. “This has created a more diversified economy, which is a huge advantage in the current situation,” Grieveson noted.

It’s hoped that chips will start to flow more readily from Asian factories by mid-2022. But some suggest the difficulties should be seen as a warning of wider issues looming over Central Europe’s smaller and more open economies.

Exports, which drive over 80% of both Czech and Slovak GDP, have shrunk alarmingly during the chip crunch. Skoda ships a full 5% of the country’s total exports. “When Volkswagen sneezes, the whole country catches the flu,” said Mytna Kurekova.

But it may be that solving the supply chain bottlenecks won’t necessarily restore the pair’s usual trade surpluses. Instead, analysts point to a growing list of challenges that includes a deteriorating global trade environment, demographic difficulties, environmental concerns and automation.

“The component crunch exposes countries that are very dependent on exports. Global trade is becoming more difficult due to considerations including nationalism and the pandemic,” said Grieveson. “The transition to electric vehicles is another huge issue that they have to confront.”

These trends will only increase the pressure for the likes of Czechia and Slovakia to adjust the economic model they’ve pursued so enthusiastically since the collapse of communism.

Based on selling skilled labor to foreign investors, the model has needed an update for years. The pair’s labor cost advantage is fading while frustration has built among local populations who still earn far less than Germans or Austrians.

The key is to ease reliance on bolting together cars and raise their share of high added-value operations such as R&D, marketing and services. But those are tricky results to secure, relying on long-winded and complex education reform and programs to support innovation, entrepreneurship and digitalization.

The region’s political leaders are wary of abandoning a model that has served their economies so well. Announcing large foreign investments offers a much better political return than reforms that will take many years to produce results difficult to quantify, point out critics.

The Czech auto industry complains, for instance, that despite the coming transformation, it cannot get the government to take the transition to electric vehicles seriously.

The OECD warns, however, that Slovakia has no choice but to move beyond its current low-added-value model if it is to sustain economic progress. The recovery from the pandemic, it adds, offers Czechia “an opportunity to focus on productivity-enhancing investment and better targeting of R&D support.”

But the message still isn’t getting through quickly enough, say economists. And they don’t appear to believe that the warning provided by the chip shortage will do much to speed it up.

“On a political level, they tend to think of auto specialization as an advantage, not a risk,” said Mytna Kurekova. “Auto investment continues to arrive and we’re still telling investors the same story we did 20 years ago. There’s very little serious discussion of alternative models.”