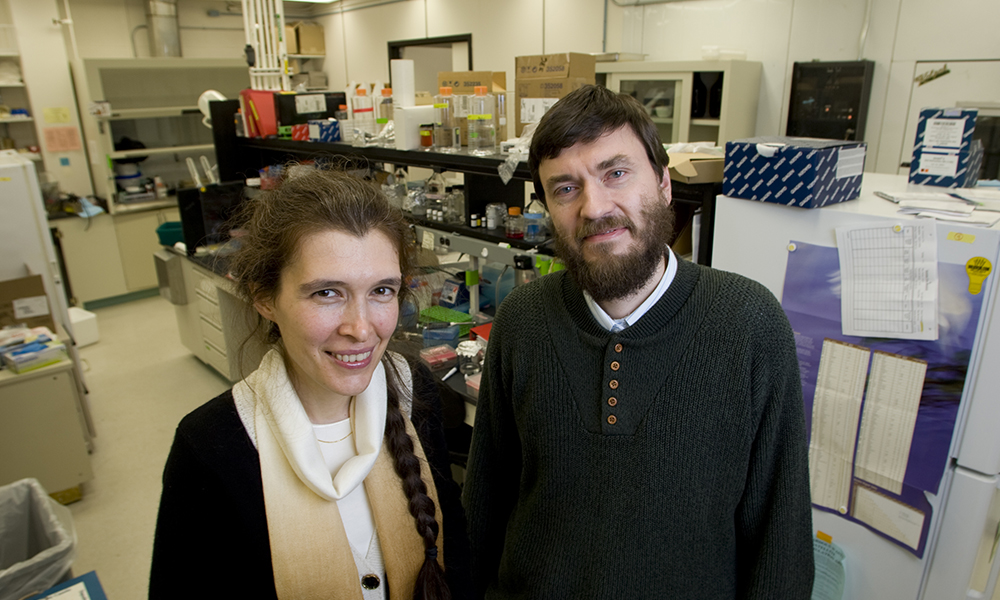 A new grant will enable biologists at Rochester, Brown, and New York University to explore potential targets of treatments and therapeutics for neurodegenerative diseases.

The human genome is littered with selfish genetic elements, also known as “junk DNA”—parasitic strands of genetic material that replicate and move within their host genomes. Scientists have produced mounting evidence that these selfish genetic elements cause harmful consequences, including health problems associated with aging.

With a new $16 million, five-year grant from the National Institutes of Health, researchers from the University of Rochester, Brown University, and New York University will collaborate to further investigate how types of selfish genetic elements called retrotransposons affect age-related pathologies. Specifically, they will concentrate on the role retrotransposons play in Alzheimer’s disease and neurodegeneration.

“This project will combine investigators with expertise in retrotransposons, aging, and neuroscience to understand the role of transposons is Alzheimer’s disease and test whether targeting transposons alleviates Alzheimer’s symptoms,” Gorbunova says.

With support from a prior NIH grant, Gorbunova, Seluanov and the rest of their team have been researching the mechanisms of aging with special attention to the potentially harmful effects of retrotransposons. Evidence from this team and other scientists has implicated retrotransposons in promoting aging.

Gorbunova and Seluanov have focused their research on a class of selfish genetic elements called LINE1 retrotransposons, which are the most prevalent retrotransposons found in humans; LINE1 retrotransposons occupy close to 20 percent of both human and mice genomes. Researchers have long suspected that LINE1s contribute to cancer and genomic instability because they are repressed in young tissues but become more active during aging, triggering inflammation in cells.

In 2019, the researchers published studies in the journals Nature and Cell Metabolism showing that LINE1s promote age-associated inflammation in cells. In 2021, they published a review article in Nature discussing the latest research on retrotransposons.

With the new NIH funding, the research team will join colleagues from the Salk Institute for Biological Studies to study how retrotransposons contribute to neurodegeneration and chronic, age-related diseases such as Alzheimer’s disease.

Gorbunova and Seluanov will focus on testing the hypothesis that silencing LINE1s via genetic or pharmacological approaches will alleviate age-related pathologies.

“We will employ different strategies of targeting the negative effects of LINE1s, including silencing their expression, inhibiting retrotransposition, or downregulating LINE1-induced inflammation,” Seluanov says. “We will then test if these treatments alleviate Alzheimer’s symptoms in mouse models.”

The team will also examine and define therapeutic targets specific to the central nervous system and explore possible strategies for therapeutic interventions and future pharmaceutical research in treating diseases such as Alzheimer’s.

“We hope that our research will lead to a novel approach for treating Alzheimer’s disease by targeting LINE1s,” Gorbunova says.