As students at the College of Saint Benedict and Saint John’s University tackle their coursework during the 2022-23 academic year, they have a new major to consider: data science.

For the past 15 years, the math and computer science departments at Saint Ben’s and Saint John’s collaborated in offering a numerical computation degree. The idea was to use math, computer science and a third discipline – chemistry or physics, for example – to give students a modern bent on the explosion in data available today and increasing in the future.

“Data is the new black gold,” said Bob Hesse, a math professor who is co-chair of the new data science program, along with Imad Rahal, chair of the computer science department. “Numerical computation never had our intended success. We noticed students who pursued the num comp major were selecting courses that anywhere else would be a data science major. So, we realized we should revamp, focus the course selections, and relabel the major as data science.”

The new major should not be confused with the data analytics minor available at CSB and SJU. That program, launched two years ago, is intended to complement a major, whether in STEM (science, technology, engineering and math), social sciences or humanities. The minor gives students the tools to analyze, make visualizations and tell the story behind data.

The data science major, by contrast, is for students who not only want to use the tools but also modify or make new machine learning algorithms. If you enjoy math, statistics and programming, and you want to use all those tools, this is the major for you.

“I once was one of those students who loved math but really did not know what to do with it, and that was the one thing that stopped me short from committing to a math major,” said Rahal, who earned a computer science degree in 2001 from Lebanese American University, followed that with a master’s and doctorate from North Dakota State University, and has been a faculty member at CSB and SJU for more than 17 years. “I took a lot of math, and I took a lot of computer science and I felt ‘This is stuff I can use. This is stuff I can find a job with.’ Our students really shouldn’t be worried about job prospects and, if you want to continue with math, by all means do so. But my belief is that data science will be a wonderful career preparation and you’re probably going to get snatched right away with the expertise you have.”

Those futures may be in business, industry, research or education. Data scientists discover new knowledge and aid in the decision-making process in virtually every major field. Positions include administrators, business IT analysts, clinical data managers, data analysts, data architects, data engineers, machine learning engineers, marketing analysts, mathematicians and statisticians. According to Fortune, data science jobs are a top pick for Generation Z, and Harvard Business Review said the field is one of the most popular of the 21st century.

Sean Landman ’10 is a good example of what’s possible. He earned a degree in numerical computation, used it as a springboard to master’s and doctorates in computer science at the University of Minnesota, and is now a research manager at Medtronic. He specializes in data science and algorithm development for diagnostics and monitoring of cardiac disease.

“I don’t think I even knew about the numerical computation major when I arrived at Saint John’s,” said Landman, who is from Maple Grove, Minnesota, went to Totino Grace High School and graduated summa cum laude from SJU. “I dabbled in all the sciences, and I was always interested in computer science. Both of my parents are computer engineers, so I guess I was genetically predisposed that way. I did some programming in high school, but I was interested in a lot of things. I took courses in physics and biology, and chemistry and math. At one point, I was considering a natural sciences major that would’ve combined a lot of that. But numerical computation allowed me to take more math courses that I was interested in and customize my coursework more than if I’d gone just with math or computer science. I liked the flexibility of having both be a big part of my degree.”

The data science major totals 52 credits, 40 of which are common requirements. For acceptance, students must post at least a 2.5 grade-point average in CSCI 150 (Introduction to Computing in the Liberal Arts and Sciences), CSCI 160 (Problem Solving, Programming, and Computers), MATH 119/120 (Calculus I and II).

Twelve credits of electives support the major, which includes several classes that were not part of the numerical computation major.

“The new major sounds great and it more appropriately defines the curriculum,” Landman said. “Data science is a description that wasn’t around not long ago. It’s a major. It’s programs. It’s a job title. It shows the connection of all these fields. It’s for people interested in programming and computer science but more on the research side – like software engineering. It’s also for people interested in math, which can be very theoretical and academic. Data science is a way to take interest in that and give it very specific applications.

“Companies are interested in data science and it’s a growing field. It’s how you turn math into a career. You can look all around you and find new products that are the results of data scientists making recommendations on your streaming service or Spotify, the things your Apple watch or FitBit will tell you, information about how you sleep … that is all the result of data scientists creating those things.”

Even before Bardia Bajani ’20 graduated with a degree in numerical computation, he was pitching Hesse and Rahal with the idea of a switch to data science. In fact, Bajani already lists data science in parentheses behind his undergraduate education on his resume, which now includes a master’s in management of information systems and digital innovation from the London School of Economics and Political Science.

“I was very pleased to hear they’re making these changes. The data science major puts you in position to maximize the output of the tools available as well as build some on your own,” said Bajani, an international student from Sweden, whose parents are Iranian, and who has since relocated to England.

He became interested in entrepreneurship at CSB and SJU, met a business partner at LSE and has co-founded FuzeQube Group, which invests in innovative ventures. The company is in the process of launching seven new brands and provides infrastructure for the businesses to grow and share resources. He said the interdisciplinary education he found at Saint Ben’s and Saint John’s allowed him to synthesize the best training in computer science and math.

“My honors thesis was not related to any of the formal techniques you apply in either one,” Bajani said. “Mine was on digital ethics. We’re in a society where a lot of what we do gets tracked and a lot of what we do can be quantified in some shape or form. It’s not all positive that we have so much data on our hands, but it provides great opportunity, nonetheless. To be able to model on the basis of data available to you is immensely valuable. As an entrepreneur, it’s extremely valuable because when I’m able to quantify something it’s not my opinion but the data and the facts talking.

“I’m definitely building on a foundation that was set at Saint John’s. I saw myself as more of an analytical person before I took the leap of faith and joined the entrepreneurship program there. I still have amazing friends from that network, and it has set the precedent for the rest of my career.” 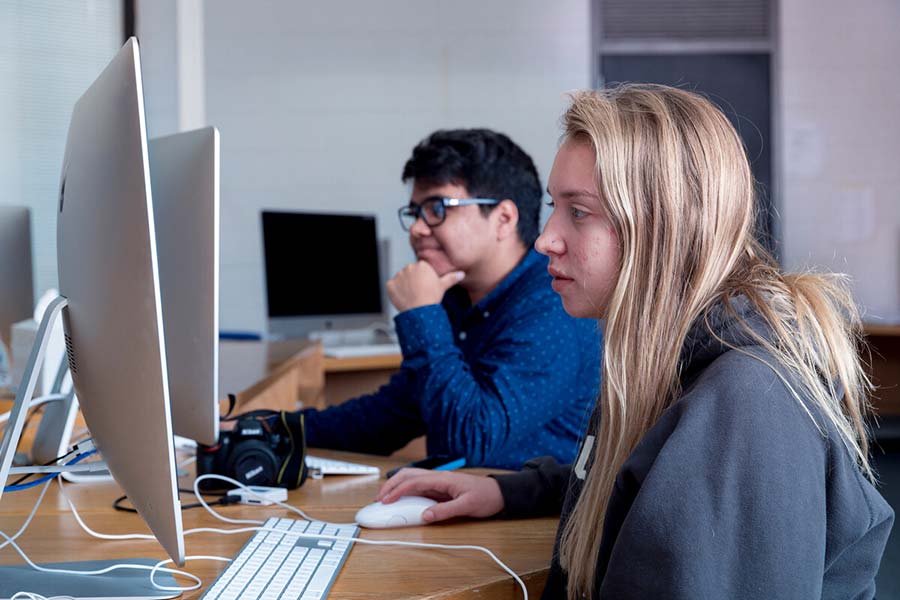 Students from the College of Saint Benedict and Saint John’s University work in a computer lab in the Main Building on the CSB campus. Beginning this fall, a new major – data science – will be available to those interested in a combination of computer science, math and other disciplines.

Rahal said the evolution of the data science major is a natural progression of the discipline and that Saint Ben’s and Saint John’s are uniquely positioned with independent computer science and math departments (what you would find at a large university) but also in an intimate environment that allows students to work on research in collaboration with professors like Rahal and Hesse.

Hesse said such a combination, along with the liberal arts found at CSB and SJU, will produce graduates who will be able to tell a story or paint a figurative picture of how concepts interpret data.

“That’s what sets us apart,” he said.