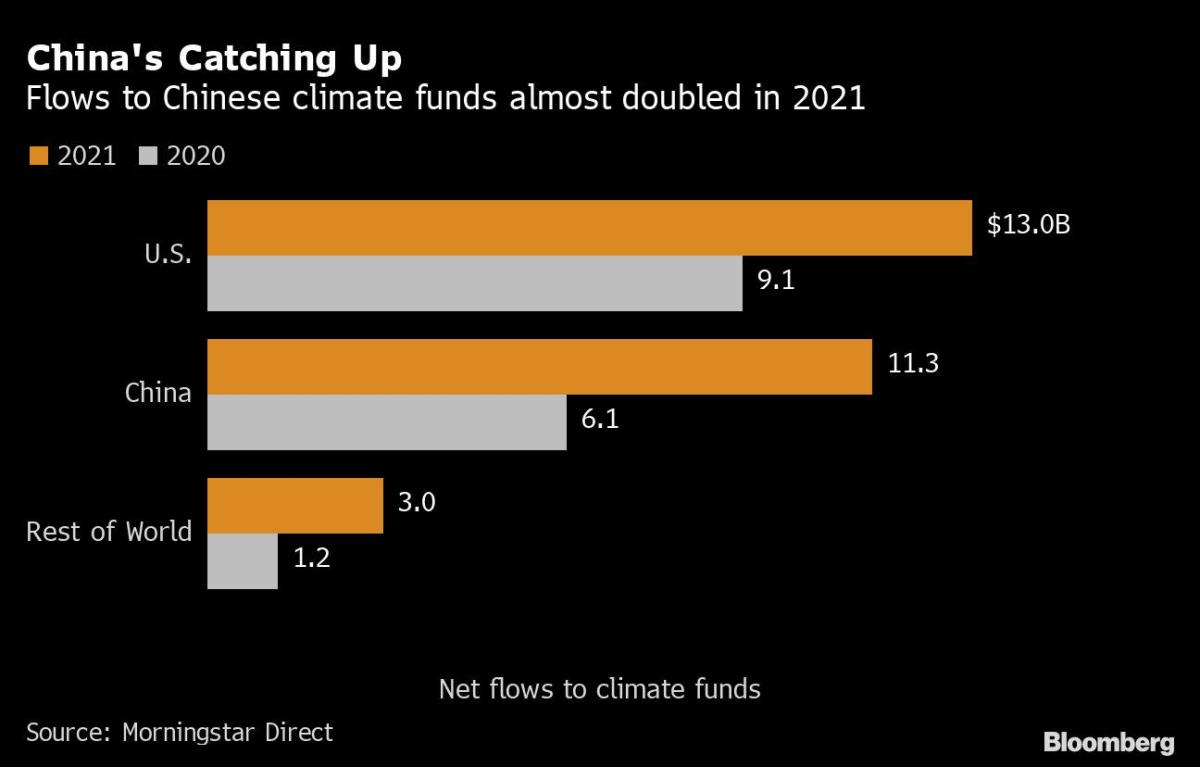 (Bloomberg) — Chinese funds with a climate focus more than doubled their assets last year, passing the U.S. as the second-largest global market and bolstering Beijing’s push to meet its net-zero targets.

China’s fund assets grew to $47 billion in 2021, a 149% increase from the previous year sparked by record inflows and outperformance by the domestic clean energy sector, according to data from research firm Morningstar Inc. In the U.S., climate funds rose to $31 billion, while Europe, by far the biggest market, almost doubled to $325 billion.

“In the West, climate protection awareness is probably a main factor driving the growth,” said Morningstar ESG analyst Boya Wang. “In China, it’s largely driven by policy. After the government officially approved carbon neutrality and net-zero targets in 2021, we saw a mushrooming of all these new climate funds.”

Investors in China added $11.3 billion into climate-focused funds last year, almost double their 2020 level. They were richly rewarded. Chinese climate funds were up 15% on average in the 12 months to April 2022, compared with a 7.2% decline for U.S. funds, according to Bloomberg calculations using Morningstar data.

One of the world’s worst polluters, China has quickly pushed a chart-topping amount of private money toward its green ambitions, which include peak emissions by 2030 and carbon neutrality by 2060. In just a few years, it’s become one of the biggest issuers of green bonds, green loans and other financial products designed to support those policy goals.

The push has benefitted clean energy stocks and the funds that own them. It took less than 18 months for a pair of solar-focused funds — Huatai-PineBridge CSI Photovoltaic Industry ETF and Tianhong CSI Photovoltaic Industry Index Launched Fund — to rank among China’s biggest climate funds. Companies like JA Solar Technology Co. and Trina Solar Co. contributed to the gains for China funds.

Another 53 climate-focused funds launched last year alone, with more than half of the new products focused on clean energy and tech.

How environmentally friendly these funds really are is hard to tell. Of the 106 China climate funds analyzed by Morningstar, only 11 had sustainability ratings of “average” or higher. The rest were worse or unrated. Low ratings can reflect a number of ESG factors, including transparency, which is generally less robust in China relative to Europe or the U.S., and other governance factors.

Meanwhile, U.S. climate funds struggled, weighed down by clean tech stocks. While China’s clean energy benchmarks surged ahead of the nation’s CSI 300 Index, U.S. peers lagged behind the S&P 500. One of the hardest hit U.S. holdings, Sunrun Inc., lost more than half its value in 2021, after a fourfold runup the year before.