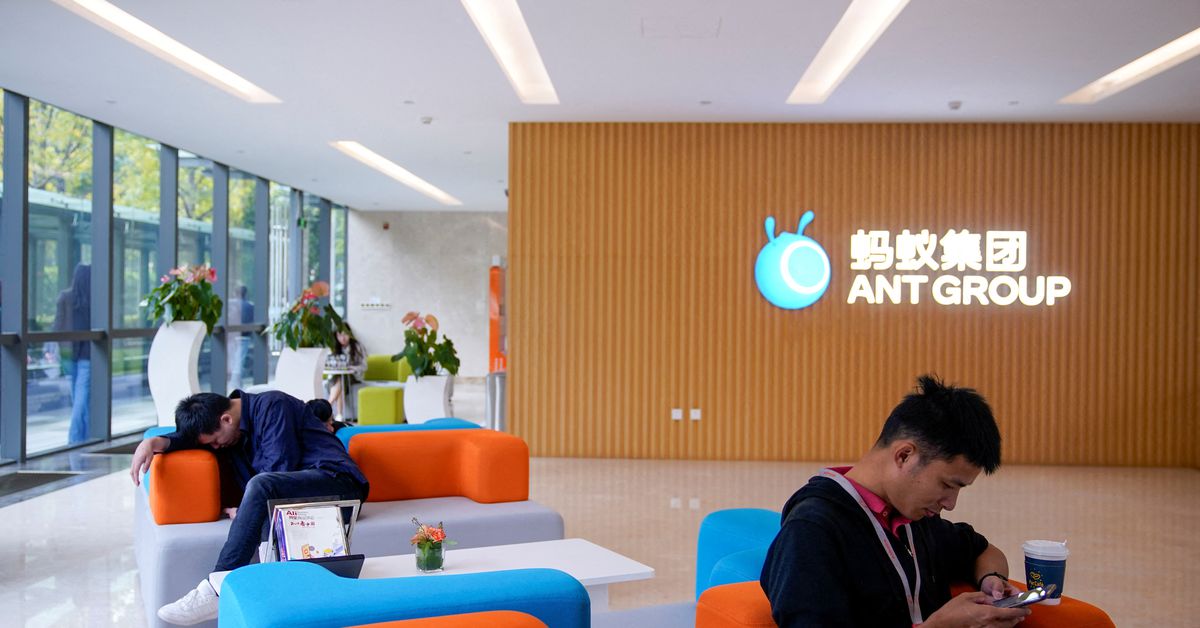 A logo of Ant Group is pictured at the headquarters of Ant Group, an affiliate of Alibaba, in Hangzhou, Zhejiang province, China October 29, 2020. REUTERS/Aly Song

SINGAPORE, June 9 (Reuters) – China’s central leadership has given a tentative green light to Jack Ma’s Ant Group to revive its initial public offering in Shanghai and Hong Kong, two sources with knowledge of the matter told Reuters on Thursday.

Ant, an affiliate of Chinese e-commerce behemoth Alibaba Group Holding Ltd (9988.HK), aims to file the preliminary prospectus for the offering as soon as next month, said the sources, declining to be named due to the sensitivity of the matter. L4N2XW2A1

The U.S.-listed shares of Alibaba Group Holdings , , which owns nearly one-third of Ant, rose up to 7% in pre-market trading on the report.

“Ant’s IPO is expected to restart, which will have a positive impact on the Hong Kong IPO market. And the restart of Ant’s IPO indicates that relevant regulations may be relaxed, which will benefit the recovery of the IPO market in HK and increase investors’ confidence in IPO investment as well.”

“Over the last several weeks we have seen signs that Chinese authorities are dialling back the crackdown on the tech industry. The China Securities Regulatory Commission has established a team to reassess Ant’s share sale plans and is also nearing the final stages of issuing Ant a long-awaited license that would clear the path for an IPO and make the company regulated more like a bank.”

“Investors that have shunned China tech stocks for the last two years, may start cautiously dipping a toe in those waters again.”

“That marked one of the first instances of the tech crackdown starting in China. Any official confirmation of the IPO being allowed again would be a huge positive development for China tech stocks in general and Alibaba in particular.”

“It’s a signal of easing regulations on internet firms.”

“After listing, the firm will have to take on more responsibilities, and the compliance requirements will be higher. It will not be the original freewheeling internet industry any more.”

“Sentiment in the market will improve, there are signs of improvement in China’s supervision, but it will depend on the U.S. side in the future.”

“In the last couple of years there have been concerns that Chinese authorities have been keen on controlling businesses and people like Jack Ma. The revival of an Ant IPO suggests that authorities want to be seen as a bit pro-market and pro-business rather than in control.”

“They are rolling back on their crackdown to counterbalance the lockdown they’ve had. Any data out of China lately has been dreadful because of lockdowns and the last thing they want to do is compound that issue. In the next three to six months we are likely to see China’s crackdown unwound.”

“Also, if you IPO a company, you only do it when you are confident the markets will be stronger again in three to 12 months down the line, so it suggests optimism on both sides.”

“Now could be a good time for the Ant IPO to come back. The Chinese government needs something to encourage economic growth and there has been an easing in some regulatory policies that had been put in place for the tech sector. That indicates that the regulatory risk for this sector is not as big as it was before.”

“The size of Ant and the IPO will have to be smaller than what was planned in 2020 because the market conditions have changed and cannot be compared to now.”

“There have been policies to rein in the tech companies which have had to listen to those orders. If Ant was able to carry out a successful IPO, I think that would be a trigger for a turnaround in sentiment for IPOs in Hong Kong and the broader market here too.”