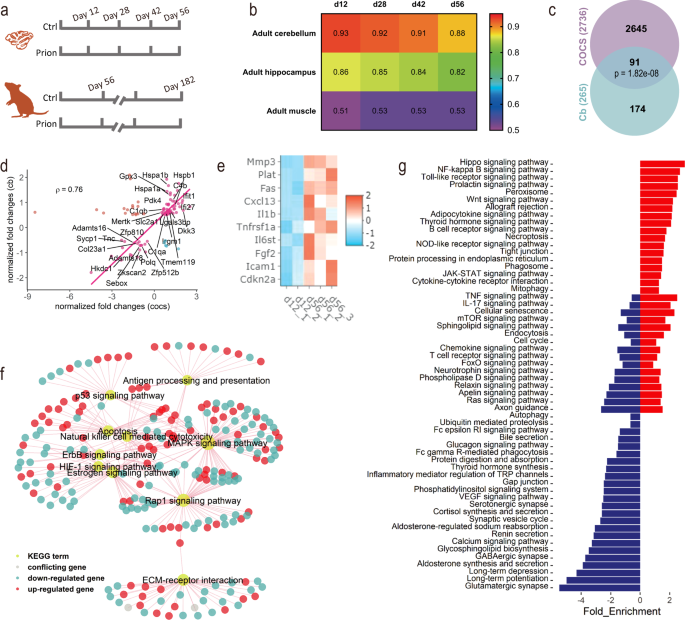 For in vivo studies, adult male C57BL/6 J mice purchased from Charles River Germany were used. These mice were part of the mouse cohort that had been used for our previous investigations focusing on gene expression of the hippocampus in prion diseases12. For studies using brain slice cultures, C57BL/6 J pups from the Laboratory Animal Services Center, University of Zurich were used. All animal experiments were performed according to Swiss federal guidelines and approved by the Animal Experimentation Committee of the Canton of Zurich.

Intracerebral inoculation of adult C57BL/6 J mice was performed as previously described12. Briefly, 30 µl of 0.1% normal brain homogenate (NBH) derived from the whole brain of healthy adult CD-1 mice or the same amount of prion-containing brain homogenate derived from the whole brain of terminally sick Rocky Mountain Laboratory strain of scrapie, passage 6 (RML6) infected mice were injected into the brain with 0.3 ml syringes under deep anesthesia. Health and prion disease symptoms of the inoculated mice were monitored according to a protocol approved by Animal Experimentation Committee of the Canton of Zurich.

Brain slice cultures were prepared using cerebellar tissues from 10–12 days old C57BL/6 J mouse pups according to a previously published protocol39. Briefly, 350 μm thick cerebellar slices were produced using a Leica vibratome and temporarily kept in ice-cold Gey’s balanced salt solution (GBSS) supplemented with kynurenic acid (1 mM) and glucose. Slices with intact morphology were then collected and exposed to RML6, NBH or no brain homogenate for 1  at 4 °C. After extensive washes, six to eight slices were put on a Millicell-CM Biopore PTFE membrane insert (Millipore) and kept on a slice culture medium (50% vol/vol MEM, 25% vol/vol basal medium Eagle, and 25% vol/vol horse serum supplemented with 0.65% glucose (w/vol), penicillin/streptomycin and glutamax (Invitrogen)) at 37 °C in a cell culture incubator. The culture medium for the brain slices was changed three times per week.

Rapamycin (HY-10219, MedChemExpress, USA) was dissolved in dimethyl sulfoxide (DMSO, Sigma, 472301, Switzerland), aliquot, and stored at −80 °C. Freshly thawed rapamycin was added into the brain slice culture medium during medium changes from day 12 to day 56 with the final concentration of 500 nM. The same amount of DMSO was used as control.

Immunofluorescent staining of cultured brain slices was performed as described previously41. Brain slices were fixed in 4% PFA for 30 min, permeabilized with 0.1% Triton X-100 in PBS and blocked with 5% goat serum in PBS overnight. After blocking, brain slices were incubated with anti-NeuN antibody (1:1000, Millipore, MAB377) for 3 days at 4 °C. After intensive washes in PBST, slices were incubated overnight with Alexa488 conjugated goat anti-mouse secondary antibody (1:3000, Jackson ImmunoResearch) at 4 °C. Stained slices were mounted on glass slides and imaged with a fluorescent microscope (Leica Biosystems).

High-throughput RNA sequencing (RNAseq) was performed as previously12,40. For in vivo RNAseq experiments, three mice (the entire cerebellum from each mouse as one biological repeat) per experimental condition were used at each time point. For ex vivo RNAseq experiments, cerebellar slices prepared from multiple pups from 1 to 3 litters of the same age were pooled together and randomly distributed into different slice culture wells with 6–8 slices per well; slices from two or three wells (each well as one technical repeat) per experimental condition were used at each time point. Total RNA was extracted using the TRIzol™ Reagent (Invitrogen, 15596-018). After cleanup with the RNeasy Plus universal mini kit (QIAGEN) and quality-check with Bioanalyzer 2100 (Agilent Technologies), sample mRNA passed the quality control was enriched with the poly-A method. Sequencing libraries were then prepared with the TruSeq RNA Sample Prep kit v2 (Illumina), and 150-bp paired-end high-throughput RNAseq was performed on an Illumina Novaseq 6000 equipment at the Functional Genomic Center Zurich.

Differential expression analysis was done with edgeR42. Briefly, after quality control with FastQC, sequencing reads were aligned to the reference genome (Mus_musculus/GENCODE/GRCm38.p6/Annotation/Release_M23) with STAR43. Genes with low read counts were filtered out with the default parameters in edgeR. Trimmed Mean of M-values (TMM) normalization was applied to account for compositional biases introduced by the sequencing depth and effective library sizes. The significance of differential expression for each gene was tested using the QL F-test. Genes with absolute log2 (fold change) > 0.5 and false discovery rate (FDR) < 0.05 were considered differentially expressed genes (DEG). KEGG pathway enrichment analysis of DEG was performed using R package pathfindR44.

Aging-associated genes were clustered according to their temporal profiles using the fuzzy c-means algorithm with the R package Mfuzz45. Mean gene expression values (normalized counts) for each time point were normalized through logarithmic transformation and standardized with default settings. The fuzzifier parameter m and the number of clusters c were estimated with the default programs in Mfuzz. Cluster membership value >0.5 was used for identifying the core genes in each cluster. Only the core genes in the clusters were plotted in the temporal profiles and used for downstream analyses. Pathway enrichment analysis of the clustered genes was performed using enrichR46.

Enrichment of core genes in each aging-associated cluster for major cerebellar cell types was performed by gene set enrichment analysis (GSEA) using the R package fgsea48. The core genes of each cluster were used as gene sets. The ranking list of genes for each cell type was generated based on the expression fold changes of a given gene identified in a given cell type against the rest of the cerebellum49.

Gene co-expression network analysis was performed using the R package CEMiTool50. Expression levels (normalized counts) of genes detected in all experimental groups were normalized through logarithmic transformation and filtered according to variance with the default parameters. Genes in the filtered list were used for identifying gene co-expression networks with the soft-thresholding parameter beta = 20. The activity of identified co-expression modules across experimental conditions was evaluated by performing a GSEA using the genes within modules as gene sets and the median z-score values of each phenotype as rank.

Human brain-aging-related gene expression data were obtained from a previously published study26, where the authors examined the genome-wide gene expression profiles in the post-mortem samples of the frontal pole of 30 individuals ranging in age from 26 to 106 by Affymetrix gene chips. Genes differentially expressed in the autopsied frontal cortex of 10 sporadic CJD patients and 10 age-matched control subjects were obtained from a previously published study, and are available at GEO with the accession number GSE12457127. Information regarding the age, sex, neuropathological diagnosis, cause of death, post-mortem interval of the human subjects, as well as the ethical statements on the use of human samples, can be found in the original publications.

Unless otherwise mentioned, an unpaired, two-tailed student’s t-test was used for comparing data from two groups, which were presented as mean ± SEM. Statistical analysis and data visualization were done using R or GraphPad Prism 8.0.

Further information on research design is available in the Nature Research Reporting Summary linked to this article.