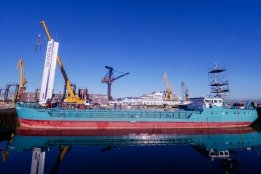 The rigid sail has a tilting mechanism and an autonomous control system. Image Credit: Bound4Blue

Maritime engineering company Bound4Blue has installed one of its wind-assisted propulsion systems on board a theatre ship in Spain.

The company has installed an 18m eSail system on board the theatre ship La Naumon, it said in an emailed statement this week.

The rigid sail has a tilting mechanism and an autonomous control system.

“Our rigid sails are quick and simple to install,” Jose Miguel Bermudez, CEO of Bound4Blue, said in the statement.

“Before the installation, a detailed vessel transformation project is performed and submitted to the class society and flag state for approval.

“Later, prior to the installation, the foundation and electrical work is completed.

“The installation can then be performed afloat, like in the case of ‘La Naumon’, during a scheduled drydocking or during any port call, as the operation takes less than a day.”