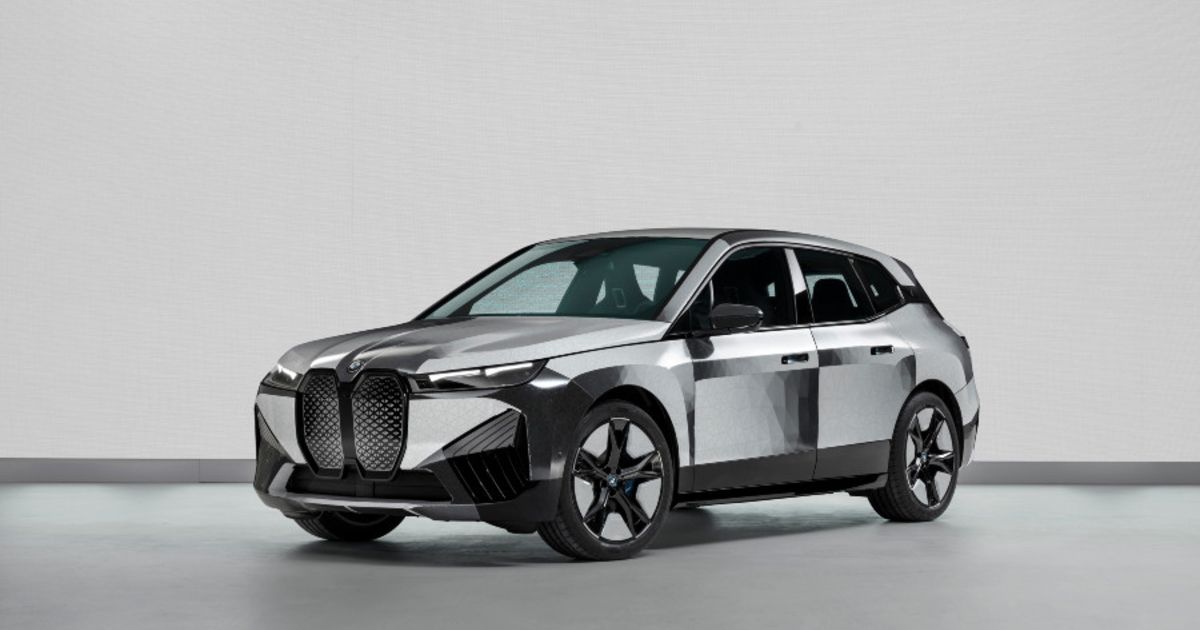 BMW wants to let you change the color of your car with the touch of a button.

The automaker has debuted a concept vehicle called the BMW iX Flow, based on the iX SUV, which uses electrophoretic technology to change colors from black to white or combine black and white in a kaleidoscope of graphics across the surface of its body.

“The car dresses you, it expresses you–not just from the inside but from the outside–so we have tried to create a technology and adapted it to the car that allows you to do that,” Christoph Grote, senior vice president of electronics at BMW, said during a roundtable interview during the launch.

Grote said that being able to change a vehicle from dark to light while driving under hot temperatures would help with efficiency and thermal regulation inside the vehicle.

BMW worked with a company called E-Ink to develop the application for vehicles. Founded in 1997, E-Ink developed the technology used in Kindle readers and commercial displays for such brands as Sony and Amazon.

BMW’s application of e-ink works via a wrap tailored to cover the entire body of the SUV. The wrap contains different color pigments that, when stimulated by various electrical signals, will rise to the surface of the skin, causing it to change hue.

Adrian van Hooydonk, the head of BMW design, called the color-changing technology on the iX Flow, which has not been confirmed for production, part of the group’s plan to develop “human-centric” products that stimulate all senses.

BMW has said it will spend 30 billion euros ($34 billion) on future-oriented technologies by 2025.

“For us, digitalization is about the total experience, and emotions that can be created with it,” van Hooydonk said during the roundtable interview.
CES debuts

BMW announced E-Ink to coincide with the Consumer Electronics Show in Las Vegas. The company had planned a full program of in-person events at the annual technology show but canceled in favor of the virtual reveals streamed from Munich amid a rise in novel coronavirus cases.
Mercedes-Benz also ditched plans to attend the convention, as did Amazon, Meta, and Lenovo, among others.

Had BMW attended CES this year, it would have marked the first time the 105-year-old brand premiered an all-new model at the traditionally tech-heavy show. Instead, the electric zero-emissions BMW iX M60 made its public debut via digital stream.

The SUV is a more powerful version of the electric iX that BMW debuted in 2021, with a joint system output of 455 kW/619 PS from two electric motors, a maximum torque of 811 pound-feet with Launch Control, electric all-wheel drive, and high-performance chassis tuning. BMW says it will go from zero to 60 mph (97 kph) in 3.8 seconds.

Along with the new i4 sport sedan, the iX and its variations reflect BMW Group’s heavy investment in electric vehicles. As of December 2021, it had already delivered more than 1 million of them worldwide.

“A key driver to our success is our electric mobility push,” said Pieter Nota, head of BMW sales, during the launch. “Already, we have the next milestone in our sights: We aim to break through the 2-million-mile [EVs delivered] mark in the next two years.”

The E-Ink was one of several new technologies BMW has developed to immerse the user in personalized digital environments in and outside its vehicles. So-called “My Modes,” set for launch in the second half of 2022, include one that displays digital artwork inside the car’s cabin and a theater mode that improves entertainment in the rear portion of the cabin.

Modes called Expressive and Relax are characterized by customizable sounds and digital patterns splayed across the vehicle. The effect sounds similar to the comfort technologies such as “Energizing” and “Warmth” modes that Mercedes-Benz has provided in many of its luxury vehicles; BMW executives say theirs are different and must be experienced to be appreciated.

“BMW My Modes are unique for this car,” Stephan Durach, senior vice president of BMW Connected Co. and technical operations, said during the roundtable. “It is a completely different thing. You really have to experience it by yourself.”

BMW is developing the specific soundscapes for all-electric models in its vehicles with the multiple award-winning film score composer Hans Zimmer, who most recently developed the soundtrack for Dune. (No word yet if you’ll get a booming BRAAAM when you hit the gas.)

“Sound … gives us the possibility of moving forward in a graceful and elegant way, without the noise and distraction that gasoline and diesel engines have provided us with in the last century,” Zimmer said during the launch. “Instead, we glide with invisible technology. Electricity is invisible, and anything invisible and with that power automatically is a good step into that future.”

Nota explained the decision to push for such novelties in his signature simple, direct style: “We know the digital experience is becoming more and more important for our customers.”

So far, so good. In a Jan. 4 post on LinkedIn, Nota said the company had surpassed Mercedes in global premium-car sales for 2021. BMW will officially report its full-year sales numbers on Jan. 12. For the first three quarters of 2021, the automaker delivered 1.7 million vehicles, exceeding Mercedes deliveries by more than 112,000.

If the lead holds, this would be the first time since 2015 that BMW bested its biggest rival.