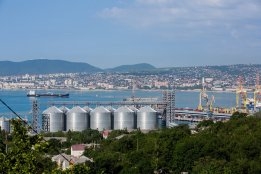 The company that operates the Black Sea oil port of Novorossijsk has been included in European Union sanctions against Russia.

Under EU Regulation 2022/328 issued on February 22, the Commercial Seaport of Novorossijsk (NCSP) is listed in Annex XIII,according to Protection & Indemnity society West of England.

The annex appears to be sectoral in nature and applies to financial dealings with the entity.

“The impact on shipping appears – currently – to be limited,” the society said. There does not appear “to be any current prohibition on the use of the ports and terminals controlled by the NCSP”, the society added.

Ship & Bunker spoke to a bunker company active in Novorossijsk on Tuesday which reported a drop in bunker enquiries at the port.

In addition to Novorossijsk, NCSP operates terminals at Primorsk and Kaliningrad as well as reportedly operating nine stevedoring companies across those ports, according to West of England.