The U.S. Chamber of Commerce, the nation’s largest business lobby, is taking up the cause of giant technology companies facing fresh antitrust threats from the Biden administration and Congress.

The organization, whose members include industry stalwarts such as AT&T Inc. and Pfizer Inc., isn’t known as a voice for Silicon Valley. But in recent months it’s stepped into the fight against tougher antitrust enforcement, repeatedly attacking the U.S. Federal Trade Commission and its chair, Lina Khan, a fierce critic of the internet giants.

“Any time we see a big expansion in regulatory power over industry, we’re going to get involved,” said Suzanne Clark, the chamber’s chief executive officer, in an interview with Bloomberg News Tuesday. “We didn’t choose the FTC and antitrust. That battle came to us.” 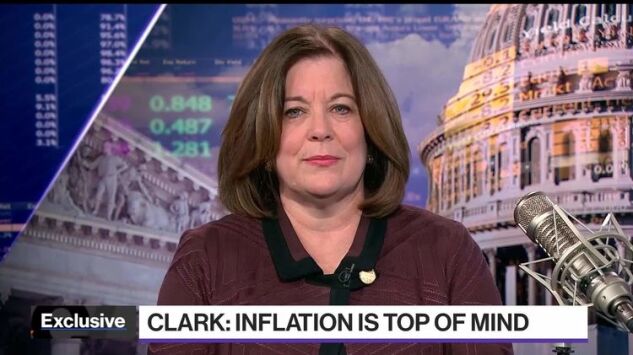 The business group, which hasn’t previously made competition policy a priority, says it’s taking on the issue today because the traditional antitrust framework that companies have relied on for decades is being turned upside down in Washington. The change affects large and small businesses and industries beyond tech, the chamber says.

The fixation on antitrust closely aligns the chamber with tech industry heavyweights and their advocates as the companies come under intense criticism from legislators and fight investigations and lawsuits by federal watchdogs. The chamber opposes measures proposed in Congress that target the tech platforms and is preparing a lawsuit to get access to documents related to Khan’s policy changes and any communications between the FTC and the White House.

The FTC declined to comment on the chamber’s campaign against it.

The chamber’s stance in part reflects the stronger influence of its tech members, according to people familiar with the matter. Amazon.com Inc., for example, started donating to the chamber only a year ago, one of the people said. Meta Platforms Inc.’s Chief Privacy Officer Erin Egan recently joined the chamber’s board of directors. Egan and Clark are friends from Washington lobbying circles, according to another person.

The chamber, which spent $65 million on lobbying last year, doesn’t disclose how much its members give to the organization or even their identities, though its board of directors is listed on its website. Amazon, Alphabet Inc. and Microsoft Corp., which is also on the chamber’s board, declined to comment or didn’t respond to requests for comment. Microsoft has been at odds with its big tech peers over antitrust reforms. Last week, the company announced app store principles that it says align with legislation proposed in Congress.

Tech companies have put more muscle behind the chamber after one of their main trade groups, the Internet Association, disbanded last year following divisions among its members over proposed antitrust regulations aimed at the industry’s giants. The organization had declined to take a stand in the policy debate even as Google and Amazon expressed concern during internal conversations among members that the association wasn’t tackling what they saw as the rising threat of antitrust reform, according to another person familiar with the matter.

“The chamber is now just another tool of Google, Facebook and Amazon, and they should be ashamed for allowing themselves to be captured by the most powerful corporations,” said Barry Lynn, the director of Open Markets Institute in Washington and an ally of the FTC’s Khan.

Clark said the tech companies are bringing “an important voice” to the chamber’s work, but insisted that it’s very hard for one industry or company to determine the organization’s priorities. Clark added that other types of companies are concerned about how aggressive antitrust enforcement is making it harder to sell their businesses.

“We’re really hearing from small and medium-sized enterprises whose exits just got all screwed up,” Clark said in the interview. “It really puts their future at jeopardy.”

Clark in January devoted much of the chamber’s annual State of American Business speech to echoing tech’s message that antitrust reforms threaten innovation in the economy. She criticized President Joe Biden’s initiatives to boost competition and proposals by Democrats and Republicans to impose new rules on tech companies. Clark also took aim at the FTC for what she called its “aggressive stance” against mergers.

In November, she accused the agency of “waging a war against American businesses.” The chamber has filed more than three dozen Freedom of Information Act requests for documents about how the FTC has “manipulated its rules and procedures while potentially ceding its independent agency status to political interference.” The group is considering a lawsuit to obtain those records.

On Wednesday, the chamber released a report arguing that antitrust regulation would prevent the U.S. tech sector from competing with China and Europe, thus undermining national security. If large domestic companies are kneecapped, foreign companies will be quick to seize market share in strategically sensitive sectors such as AI and quantum computing, the chamber wrote.

Democratic Senator Amy Klobuchar refuted this idea during a panelhosted by the Open Markets Institute on Tuesday. “Tech lobbyists are running around the Capitol telling anyone who will listen that Big Tech’s unchecked power is necessary to keep America competitive,” she said. Klobuchar, chair of the Senate antitrust committee, sponsored a bill aimed at reining in the power of the country’s biggest tech companies.

The newfound coziness between the chamber and the tech giants follows a dramatic reshaping of debate around U.S. antitrust laws. Before Biden named her FTC chair, Khan, a former Columbia Law School professor, was at the forefront of a school of thought that says the traditional playbook for policing mergers and anticompetitive conduct has failed, leading to rising power of concentrated industries across the economy. 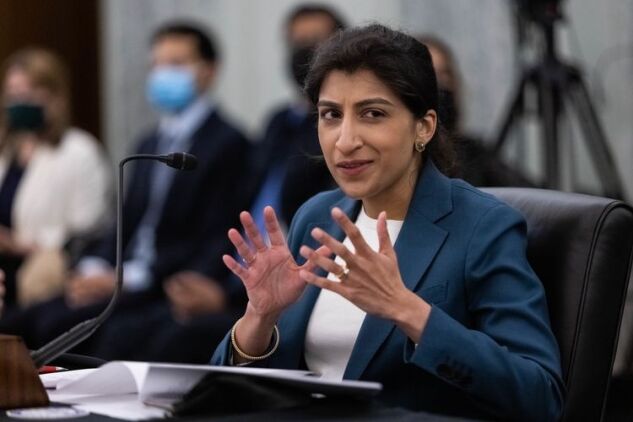 It’s a view Biden echoed last summer when he signed an executive order calling for agencies across the federal government to take steps to boost competition in industries they oversee. The White House argues that corporate consolidation and declining competition has led to higher prices for consumers and lower wages for workers while holding back economic growth.

Khan’s appointment spooked many business leaders and their lobbyists, who feared her arrival portended drastic policy changes that would hurt their companies. Despite these worries, there have been just two major merger lawsuits during her tenure. Still, the chamber aims to be prepared if Khan strikes.

“If you’re going to come in and overturn four decades-plus of approach to M&A and competition law, it’s going to go really high on our agenda,” Neil Bradley, the chamber’s chief policy officer, told Bloomberg.

–With assistance from Naomi Nix and Anna Edgerton.

To contact the reporter on this story:
David McLaughlin in Washington at dmclaughlin9@bloomberg.net

To contact the editors responsible for this story:
Sara Forden at sforden@bloomberg.net