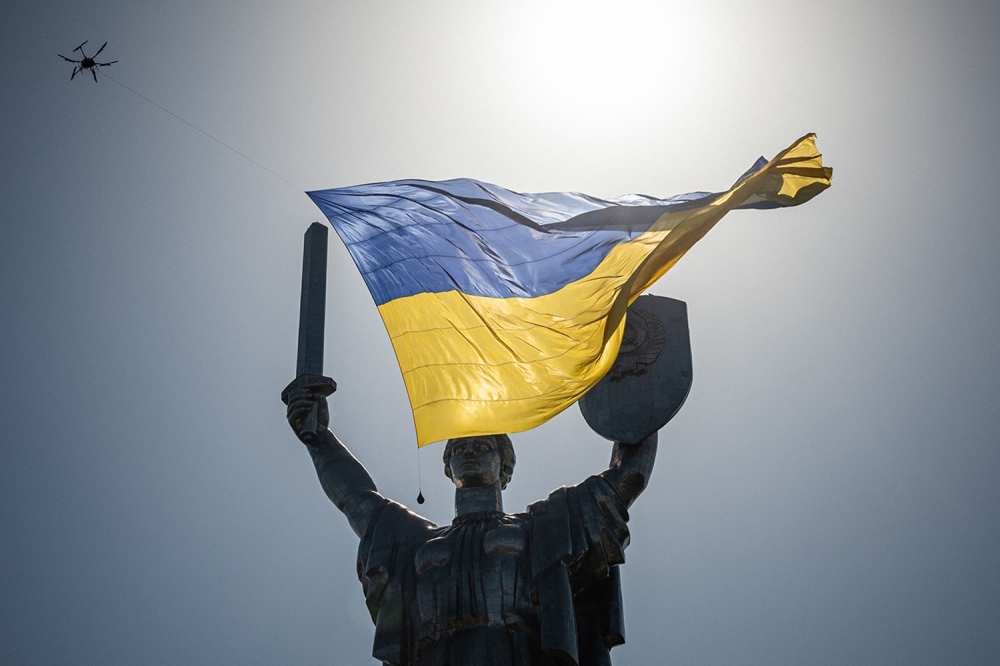 As Russia’s full-scale reinvasion of Ukraine approached the half-year mark, Volodymyr Zelensky had victory on his mind.

“We can and should think only about how to win,” the Ukrainian president said in his Aug. 18 address to the nation.

And on the six-month anniversary of the invasion on Aug. 24, a date that coincided with Ukraine’s Independence Day, Zelensky spoke even more forcefully about victory—and spelling out exactly what that would mean.

“For us, the most terrible iron is not missiles, aircraft, and tanks, but shackles. Not trenches, but fetters. And we will put our hands up only once—when we will celebrate our victory,” Zelensky said that day.

Throughout August, in the weeks prior to Zelensky’s remarks, Ukraine’s armed forces conducted multiple attacks against targets on the Crimean Peninsula, which Russia forcefully and illegally seized in 2014. These have included a series of strikes against an airstrip and munitions depots that Ukrainian authorities say were orchestrated by elite military units operating behind enemy lines. They also included drone attacks on the headquarters of Russia’s Black Sea Fleet in Sevastopol.

The strikes marked the first time that Ukraine seriously challenged Russia’s dominance of the peninsula in more than eight years and shifted the narrative of the war in Ukraine’s favor. Combined with the recent victories in Kherson and Kharkiv, they suggest that a Ukrainian victory—rather than a defensive stalemate—is genuinely possible, if still a long way off.

Ukrainian victory is not an assured possibility. But if it happens, it would be a paradigm-shifting event for European security, on the scale of the events of 1989, when the countries of the old Warsaw Pact liberated themselves from Soviet domination. Officials in Washington and other Western capitals need to be prepared for the possibility.

At the beginning of the war, the prospect of a Ukrainian victory against the fifth-largest standing army in the world appeared beyond absurd. The assumption at that time was that Russian troops would take Kyiv in a matter of weeks, if not days.

But Russia’s initial blitzkrieg aimed at decapitating Zelensky’s government failed miserably. Fighting in eastern Ukraine’s Donbas region is deadlocked. And on Aug. 29, Ukraine launched a long-anticipated counteroffensive in the south that aims to liberate the occupied—and strategically vital—Kherson region, followed by a quick, strikingly successful offensive in Kharkiv.

Russia has already suffered up to an estimated 80,000 war casualties including dead and wounded, more than the Soviet Union in a decade of war in Afghanistan, where the Soviets lost 14,500 troops and approximately 54,000 were wounded. Morale is low, and troop shortages so acute that the Kremlin-connected Wagner Group is recruiting potential mercenaries from prisons. Western sanctions are beginning to take a toll on the Russian economy, and, as importantly, hobbling Russia’s ability to acquire the microchip and semiconductor technology necessary to replenish its depleted weapons stock.

To be sure, Ukraine is also sustaining high combat losses as well. But in contrast to Russia, its forces are highly motivated and equipped by the West with state-of-the-art military hardware like the M142 High Mobility Artillery Rocket System, or HIMARS. They are also benefiting from Western intelligence sharing.

We aren’t there yet, but the once-fanciful prospect of a Ukrainian victory looks increasingly realistic. Such an outcome could be something of a 1989 redux. Just as a weakening of Soviet power in the late 1980s led to the fall of pro-Soviet regimes across the former Warsaw Pact, today, the weakening of Russian power would likely have repercussions across the former Soviet space.

The fallout would be felt in Russian clients like Belarus, where Aleksandr Lukashenko’s grip on power might not survive the defeat of his patron in Moscow.

In the aftermath of the deeply flawed August 2020 presidential election, the ensuing protests, and the brutal crackdown on dissent, Lukashenko has lost most—if not all—of his domestic legitimacy. Opposition leader Sviatlana Tsikhanouskaya, widely seen as the legitimate victor in the 2020 election, is being treated in the West as something akin to the leader of a Belarusian government in exile. Public opinion polls show a sharp rise in pro-Western attitudes among Belarusians and a sharp drop in pro-Moscow sentiments.

Lukashenko’s decision to allow Russian President Vladimir Putin to use Belarusian territory as a staging ground for his invasion of Ukraine has proved deeply unpopular. It has also sparked resistance among Belarusians, including sabotage of rail lines to prevent Russian troops from getting to the front and a hacking campaign by a group calling itself the Cyber Partisans. Meanwhile, hundreds of Belarusian volunteers have joined Ukraine’s struggle to defend itself against Russia by signing up for a paramilitary group called the Kastus Kalinouski Battalion, named for the leader of a 19th-century Belarusian uprising against the Russian Empire.

Given Lukashenko’s decision to go all in on Putin and his war, a Ukrainian victory could very well lead to a free Belarus. But the knock-on effects for the European security order would be felt beyond Belarus.

The fallout would also be felt in countries struggling to free themselves from Moscow’s influence such as Georgia and Moldova, weakening the influence Moscow is able to wield through oligarchic structures.

In Georgia, the population has long been strongly pro-Western, with large majorities favoring the country joining NATO and the European Union. But the ruling Georgian Dream party, which is financed by the reportedly Russia-connected oligarch Bidzina Ivanishvili, has stealthily and steadily steered the country away from the West and back into Moscow’s de facto orbit.

Ivanishvili accumulated his wealth during Russia’s privatizations of the 1990s and maintains close ties with Moscow, according to an April report by Transparency International. He returned to Georgia from Russia in 2012, when he formed and financed the Georgian Dream party, which then defeated Mikheil Saakashvili’s pro-Western United National Movement and has held power ever since.

In addition to backsliding on democracy and seeking to imprison political opponents, including Saakashvili, Georgian Dream has also ended the country’s previously staunchly pro-Western foreign policy. The most recent manifestation of this trend came in July when Georgian Dream’s party chair Irakli Kobakhidze assailed the U.S. and EU ambassadors, suggesting they were trying to force Georgia into a war with Russia.

Georgian Dream’s vice grip on power is entirely dependent upon Ivanishvili’s wealth. And Ivanishvili’s wealth is entirely dependent on his financial ties with Russia. A Russian defeat in Ukraine and a hobbling of the Russian economy would weaken Ivanishvili’s hold on Georgian politics and open the door for the country’s pro-Western electorate to choose a government that is more in line with their values. A weakened postwar Russia would also have a more difficult time continuing to control and subsidize the occupied Georgian regions of Abkhazia and South Ossetia, possibly facilitating the country’s reunification.

The effects of a Russian defeat in Ukraine would also be felt in Moldova. Pro-Western President Maia Sandu has been in office since December 2020, and her Party of Action and Solidarity holds a large parliamentary majority. But recently, pro-Russian parties have been resurgent. This is due in part to the war in Ukraine, which has cut off Moldovan agriculture from the Russian and Belarusian markets.

Moreover, there are an estimated 1,200 Russian troops occupying Moldova’s breakaway Transnistria region. There are palpable fears that if Russian forces are able to advance westward along Ukraine’s Black Sea coast and capture the Ukrainian city of Odesa, they could link up with troops in Transnistria and potentially threaten Moldova.

But a Russian defeat in Ukraine would effectively foreclose on this possibility, diminish Moscow’s ability to influence Moldova’s domestic politics, and undermine the Kremlin’s ability to maintain its de facto protectorate in Transnistria.

Ukrainians are fighting not just for their own sovereignty and independence but also for the second liberation of Eastern Europe, finishing the process that began in 1989. The West needs to prepare itself to manage this potential contingency.

This year marks the centenary of the founding of the Soviet Union. And as 2022 commenced, it looked like Putin was poised to begin its restoration, first with what has been dubbed a soft annexation of Belarus, then with the subjugation of Ukraine by force.

Now, it appears that 2022 may end up marking the final stage of the Soviet breakup.

How Moscow would react to a new liberation of Eastern Europe would depend on how a defeat in Ukraine changes the internal political dynamics inside Russia. But in any scenario, Russia would be weakened militarily, economically, and politically. Its capacity to resist the new reality would be diminished. Inevitably, there would be calls in some Western capitals not to “humiliate” Moscow. But such appeals should be resisted.

Victory is a long way off, and it’s certainly not guaranteed. But the United States and its European allies should not succumb to a failure of imagination about what a Ukrainian victory would mean. A free Belarus combined with a truly independent, sovereign, and whole Ukraine, Georgia, and Moldova would be a game-changer.