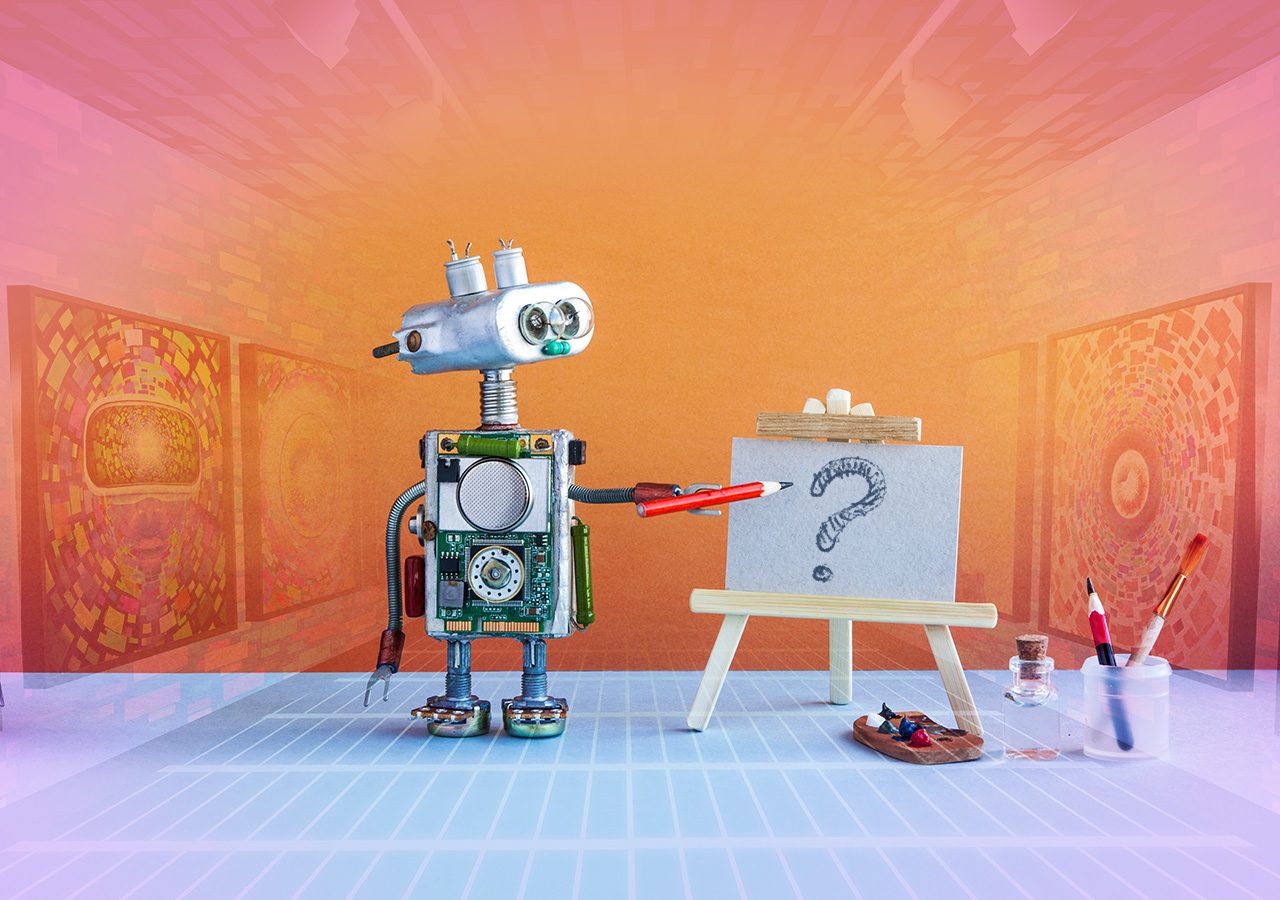 EDINBURGH, Scotland – At first glance, the series of warped clown faces in a collision of primary colors appears to be the work of a painter – with oily brushstrokes and smudged backgrounds the typical hallmarks.

Yet the images displayed by Scotland-based artist Perry Jonsson on his tablet were in fact created through artificial intelligence (AI) – reflecting a growing trend in the art world.

He used a machine learning program, whereby algorithms take a text prompt and analyze data to produce thousands of images, before selecting and refining his favorite ones.

“They’re a bit creepy,” the 31-year-old told the Thomson Reuters Foundation one August morning in an Edinburgh cafe not far the bustle of the world’s largest arts festival.

“But what I loved was the humanity that shone through, and that’s what I was looking for something that felt like an actual artist might paint,” he said, adding that AI allows him to stretch himself creatively despite his lack of drawing ability.

A filmmaker by trade, Jonsson began dabbling in AI-generated artworks this year, and is one of a growing number of people in the creative sector experimenting with software that has sparked debate about the future of art and role of man versus machine.

What began in the 1970s as artists tinkering with the possibilities of computer programming has become a burgeoning business – with AI-generated pieces winning digital arts competitions and fetching huge sums at auction in recent years.

However, advances in AI have fuelled concerns over the ethical and legal implications of co-creating art with machines.

“It’s very much a wild west,” Jonsson said, adding that he tried to “stay above board” when it comes to using copyrighted works. Yet he said it was difficult to know whether the data used by AI programs to create his artwork is rights-free.

Copyright laws in the United States and the European Union, for example, do not explicitly cover AI-generated art, leaving some artists to ask whether AI will help or hinder creativity.

The growing use of AI to produce magazine covers, posters or creating logos, for example, also throws up the thorny question of whether AI can – or will – eventually replace artists.

Award-winning 3D graphics artist and film maker David OReilly, who writes on the issue, warned that, “everyone who contributes to AI accelerates their own automation”.

A 2020 World Economic Forum (WEF) study estimated that AI would destroy 85 million jobs by 2025, but also that the tech would create 97 million new ones in various industries.

From mechanical waiters and humanoid healthcare robots to digitally resurrecting dead celebrities, the growing use of AI has thrown up complex issues of ethics, copyrights and privacy.

Art is the latest sector to test the limits of law.

Stephen Thaler, the founder and CEO of Missouri-based technology company Imagination Engines Inc, had a copyright claim for a computer-generated artwork rejected by the U.S. Copyright Review Board in February.

The board said his work, which depicts an empty railway track tunneling through a wall of violet flowers, “lacks the human authorship necessary to support a copyright claim”.

Bernt Hugenholtz, a professor of copyright law at Amsterdam University, said that future lawsuits will hinge on whether a person makes creative choices, which is a “very abstract test”.

If someone simply presses one or two buttons to produce art, or gives a general text prompt like “create a picture of a monkey wearing a silly hat”, that is not a creative act and the person could not be the author under EU copyright law, he said.

However, if someone uses a very specific prompt, generates many images, selects from those images, and carries out further edits, then it could justify authorship, Hugenholtz added.

Hugenholtz said he also saw potential for legal clashes when it comes to infringement of art styles and derivative works.

For a work to be considered copyrightable, the new creation must be sufficiently original.

Popular image-generating programs such as San Francisco-based OpenAI’s DALL-E have faced recent criticism on this front.

Such tools are trained using machine learning on huge datasets, with millions of images already created by human artists fed into the system to refine its outputs.

Some artists question if AI firms are honest about or even aware of whether copyrighted images are being used to this end.

When OpenAI in July allowed DALL-E users to use its generative art for commercial purposes, and moved to a paid subscription service, the artist OReilly criticised the move.

He called it a “scam” in an Instagram post, saying that OpenAI was profiting from “vast amounts of human creativity”.

OpenAI said that the hundreds of millions of images in DALL-E’s training data were either licensed by the company, or came from publicly available sources.

Furthermore, the company argues that the images it creates should be copyrightable, and a spokesperson said that it makes “unique, original images that have never existed before”.

However, OReilly said that tech companies are exploiting the legal uncertainty over copyright.

To ensure artists profit from their work, the data used to improve algorithms should be publicly audited and artists given the choice of whether or not to contribute their art, he added.

Several artists have expressed anger on social media over the prize, with some fearing for their livelihoods.

Jonsson said he believes that certain artistic roles – such as storyboarding to make videos – will become automated.

However, fellow Edinburgh-based artist Alex Harwood said he was not threatened by AI tools. While he has experimented with them, the illustrator stressed that they could not replicate his work – or convey the emotion involved in the creative process.

“I think it’s a point in history when you have to decide whether you reject it (AI) and live on this side of the line, or accept it (as) how it’s going to be from now on,” Harwood added. – Rappler.com