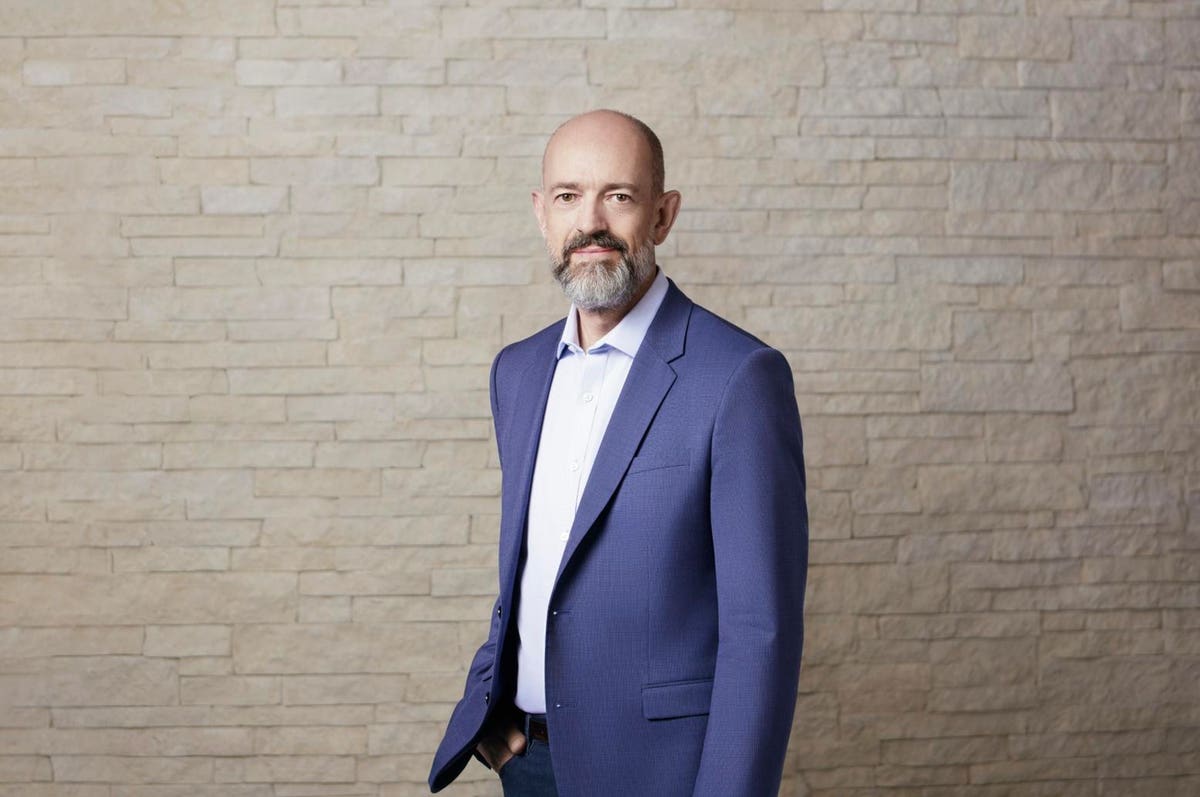 On a sideboard in his office in San Jose, California, Simon Segars, the CEO of Arm, has a 1980s-era Motorola DynaTAC mobile phone on display that’s the size of a small brick. Segars, who became the company’s top executive in 2013 and lives near its U.S. headquarters, picks up the device, which he bought on eBay, and slips off the battery pack to show a visiting reporter line after line of text printed on the back of the phone’s body. They’re basic instructions for how to use it.

Over the past few decades, mobile phones have gone from brick to slick, packing huge amounts of computing power into slim packages of brushed metal with touch-sensitive screens. Arm, which was founded in 1990 in a converted barn just outside of Cambridge in the U.K. and still has its global headquarters in the city, may not be a household name, but it’s played a pivotal role in this transition. Its 7,000-plus employees dream up the super energy-efficient processors that are the silicon brains of most of the world’s smartphones and which are also found in everything from autonomous vehicles to cloud-computing servers and supercomputers.

Arm doesn’t make chips; instead, it licenses its designs and software development tools to other companies who use them to build and manufacture microprocessors—a business that generated almost $2 billion in revenue in its latest full fiscal year. Over 100 billion Arm-based chips have been shipped by manufacturers in the past five years. The company’s success has attracted some notable suitors: In 2013 Japan’s SoftBank paid $32 billion for Arm and in September 2020 U.S. chip giant Nvidia launched a cash-plus-shares bid for it that’s currently worth $54 billion. The proposed transaction, which has SoftBank’s backing, is being reviewed by regulators in the U.S., U.K., China and the European Union.

Arm’s relationships with its 580 licensees around the world, who include chip giants such as Qualcomm, Samsung and Marvell, plus Segars’ role as chair of the Global Semiconductor Alliance, an industry group with some 250 corporate members, give the 53-year-old executive a unique perspective on the chip supply crisis that’s causing chaos in industry after industry.

Segars believes there aren’t any quick fixes. “I think it will take a few years for all of the ripples to work their way through,” he says. That suggests a period of prolonged pain for the auto industry, which has been hardest hit by the shortage. Manufacturers such as General Motors, Toyota and Ford have cut back production and, in some cases, idled factories as they struggle to get enough chips for vehicles. Consulting firm Alix Partners estimates that the silicon supply squeeze could cost the auto industry $210 billion in lost sales this year.

Part of the problem, according to Segars, is that the swift onset of Covid-19 and fears about the spread of its variants have caused business sentiment to fluctuate wildly. “Everything got tossed up in the air. You know, we’re predicting doom and gloom one minute and glory the next, and then it’s back to doom and gloom.” That’s made it particularly hard for manufacturers to estimate likely demand, which has rebounded faster than expected in some sectors.

When carmakers and other companies slashed sales forecasts as the pandemic began, they triggered even deeper cutbacks in suppliers’ production plans—a phenomenon supply chain experts call “the bullwhip effect.” “There’s this amplification of uncertainty as you work your way down the supply chain,” says Morris Cohen, a professor at the University of Pennsylvania’s Wharton School. Expanding production again isn’t always easy, adds Cohen, especially in the chip industry, where new manufacturing plants cost billions of dollars, take a year or more to build and yet more time to fine tune.

Everything got tossed up in the air. You know, we’re predicting doom and gloom one minute and glory the next, and then it’s back to doom and gloom.

Suspicions that some buyers are hoarding chips have added to the uncertainty. Things have gotten so bad that U.S. Commerce Secretary Gina Raimondo recently said the Biden administration is considering invoking the Cold War-era Defense Production Act to help identify bottlenecks in the semiconductor supply chain. The law could be used to compel companies to share information about chip stocks and manufacturing or purchasing plans.

Segars thinks the industry needs to work harder to fix things itself. “There could be an increase in openness between actors within the [chip] supply chain about what they need, inventory levels, predicted demand and lead time changes,” he says, adding this would help change the dynamic “from a collection of transactional relationships where one side wants to spend the least and the other side wants to make the most.”

Looking beyond the current supply crunch, Arm’s boss, who joined the company in 1991 as its 16th employee and has been awarded multiple patents as an engineer, is excited by a series of technological advances that are converging to create huge new markets and money-making opportunities.

Artificial intelligence (AI), the rise of 5G wireless connectivity and the proliferation of tiny sensors that collect and share data from machines of all kinds are already transforming many businesses. “This hyperconnected world of things, as opposed to just people carrying smartphones, enables all of this data to get moved. And then AI as a technology helps process and get insight from [it]” says Segars. “I think this opens up a whole new realm of computing”.

The pandemic is accelerating the rate of change, as companies collect and analyze more data from offices and factories to ensure workers can return to them safely. That’s led to a spending spree on connected devices such as motion sensors and cameras, many of which use Arm-based chips. The company says 25 billion processors based on its designs were shipped in 2020, a 10% year-over-year increase, and forecasts that 300 billion more will follow over the next 10 years.

There could be an increase in openness between actors within the [chip] supply chain about what they need, inventory levels, predicted demand and lead time changes.

Although there’ll still be a need for general purpose microprocessors, Segars believes more and more chips will be built to handle specific tasks. It’s a shift that’s already playing out in the AI world where specialized semiconductors now power things such as neural networks, or machine learning algorithms loosely modeled on aspects of the human brain and nervous system. “If you [create] a dedicated processor for machine learning, you end up with something way more efficient,” says Segars.

A conviction that Arm needs significant new investment to help it seize this and other opportunities led him to negotiate the acquisition deal with Jensen Huang, Nvidia’s charismatic CEO, who’s transformed his company into a semiconductor powerhouse with a $511 billion market cap thanks to its leadership in chips for gaming, AI and other uses. Since the bid was announced last year, its value has risen from $40 billion to $54 billion, as Nvidia’s share price has soared on the back of impressive sales numbers. In August 2020, the company said revenues in its latest fiscal quarter hit a new record of just over $6.5 billion.

Segars and Huang have spent the past year proselytizing a marriage between their respective companies and addressing opposition to it. Some Arm licensees such as Qualcomm are concerned the deal will allow Nvidia to restrict their access to Arm’s intellectual property and would prefer that the company pursue an IPO rather than a sale. Segars has said in a blog post that Arm considered a public offering but decided against it because it would lead to a focus on short-term profitability that would harm the company’s ability to innovate.

The fate of Nvidia’s bid now rests in the hands of regulators and politicians. The U.K.’s Competition and Markets Authority has already conducted an initial review of it. Dr. Andrea Coscelli, the agency’s chief executive, said in August that it has “serious concerns” about the transaction’s potential impact on competition and recommended the U.K. government allow it to scrutinize the bid in even more detail. A decision on whether to proceed with a deeper probe is expected soon. Last month, Nvidia asked the European Union’s antitrust division to begin a review of the transaction, which also needs approvals from U.S. and Chinese regulators.

Segars and Huang face geopolitical concerns as well as competition ones. The U.K. has launched a separate national security review of the bid for reasons that aren’t entirely clear, though local opponents of the combination have claimed Nvidia is likely to shift people and knowhow to the U.S., harming the U.K.’s innovation ecosystem.

Then there’s China, where Arm has a significant joint venture that sells to local chipmakers. Over the past few years, the U.S. government has restricted Chinese companies’ access to advanced semiconductor tech from U.S. and foreign suppliers, so the prospect of a British-based firm that provides key intellectual property for Chinese chips being acquired by a U.S. bidder is bound to attract scrutiny from Beijing. “The China angle is the biggest unknown,” says Timothy Arcuri, a managing director at investment bank UBS. In 2018 Chinese regulators declined approval for Qualcomm’s $44 billion deal to acquire NXP Semiconductors and the U.S. company ultimately walked away from the transaction, but in 2019 they cleared Nvidia’s $6.9 bid for Israeli chip design firm Mellanox Technologies, which has significant operations in China.

Arm and Nvidia now face the task of convincing skeptical licensees, regulators and politicians that their competition and/or security concerns are misplaced—a process that could run well into 2022, if it isn’t derailed beforehand. Both companies argue that by combining their forces, they can produce more innovations, bring them to market faster and reach a greater combined audience of developers. Nvidia has also publicly committed to maintaining Arm’s open-licensing model and to making significant investments in R&D in the U.K.

“We think that the pure merits of this deal are really, really strong,” says Segars. “And we’re spending a lot of time explaining to regulators where Arm sits in the industry and how this [combination] is going to create more dynamism in the market.” Those explanations will help determine whether Arm’s boss eventually gets to put a plaque commemorating the successful completion of Nvidia’s bid alongside the DynaTAC sitting on his San Jose sideboard.