Computer chip design firm Arm Ltd. is making a major effort to accelerate “internet of things” application and product development times with the launch of a new, solutions-based approach to IoT design.

The Arm Total Solutions for IoT initiative announced today at Arm DevSummit 2021 is built on the foundations of Arm’s Corstone reference package that’s used by its partners to design silicon chips. The key element is Arm Virtual Hardware Targets, which are a new, cloud-based virtual model of the Corstone subsystem that enables developers to design and test new software without the need for physical silicon.

With this approach, what Arm is doing is virtualizing its silicon chips and enabling developers to simulate various aspects of the processors their software will run on, including memory usage, peripherals and more. It means IoT developers can now employ modern, agile software development methodologies such as DevOps and continuous integration/continuous deployment or CI/CD, Arm said.

Arm Vice President of IoT and Embedded Mohamed Awad said in a briefing that the company has created a revolutionary approach that could reduce product design cycle times from an average of five years to as little as three years. One of the issues that holds up IoT development, he said, is the need for physical hardware to develop and test new software. So, by virtualizing the hardware before it becomes available, Arm said it’s effectively enabling hardware and software development to be done in parallel. 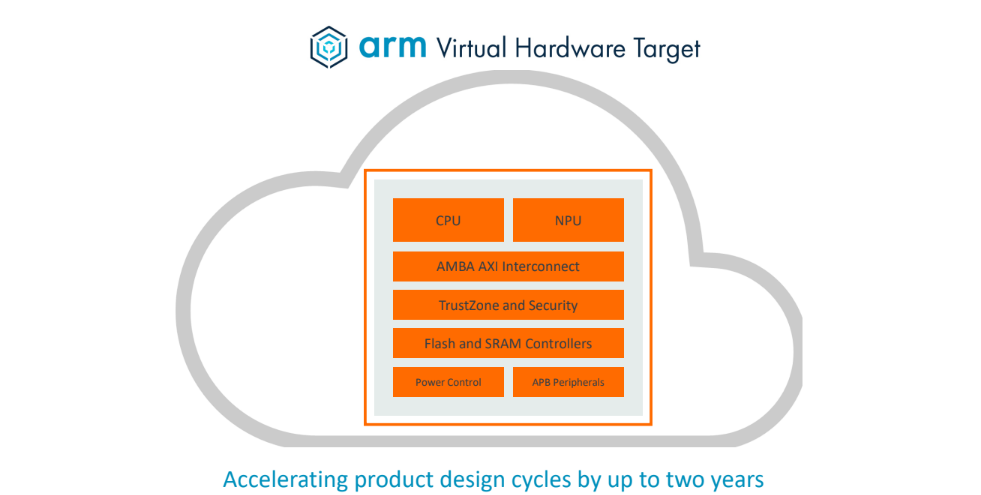 As well as the Virtual Hardware, Arm Total Solutions for IoT provides tools that will simplify the entire design process, with hardware IP, software, machine learning models and application-specific reference code all bundled with it, Awad said.

The executive made it clear Arm is not trying to compete with electronic design automation firms such as Synopsys Inc., noting that the traditional EDA players are more focused on silicon design, whereas Arm’s focus is on software development in the cloud.

Awad said Arm Total Solutions for IoT is a radical change in how future systems will be designed. “It changes the way we’re delivering key technology to the entire ecosystem and demonstrates the significant and ongoing investment in software that will empower developers to innovate for global impact,” he added.

Another key aspect of Arm Total Solutions for IoT is Project Centauri, which is a set of application programming interfaces that should make it easier to scale software and services across different hardware platforms. As Arm pointed out in a presentation, most IoT applications are designed to run on specific platforms and so developers often need to be rewrite lots of code to have that same software run on an alternative product.

It’s a lot of extra manual work that Arm says Project Centauri will eliminate, by providing a set of device and platform standards, plus reference implementations for device boot, security and cloud integration.

Arm said the Project Centauri APIs come with support for PSA Certified and Open-CMSIS-CDI, which is a standard cloud-to-device specification that reduces the effort required to create software for different clouds and operating systems. The result, Arm promised, is that developers will be able to create IoT apps for multiple platforms and achieve far greater scale with those apps, and with minimal effort.

Analyst Charles King of Pund-IT Inc. told SiliconANGLE he thinks Arm’s move is interesting and will certainly benefit its long-term customers, though it remains to be seen if it will help the company lead the IoT ecosystem in the way it hopes.

“The IoT space remains highly heterogeneous with numerous platforms, standards and businesses vying for a piece of what promises to be a very large pie,” King said. “Arm is smart to get an organized effort going here, but it’s just one of many companies hoping to establish a leadership position in IoT.”

Holger Mueller of Constellation Research Inc. was more encouraged, saying it’s good to see a key platform vendor like Arm understand the importance of supporting ecosystems, as well as new, virtualized ways of developing software. Overall, he said Arm’s IoT play makes a lot of sense given the capabilities of its silicon for low-power devices.

“Arm’s solution will help enterprises to build software faster and increase developer productivity, so we should see results from next generation applications far sooner,” he added.

The company said regular updates are on the way too, with a “robust roadmap” of future releases for artificial intelligence-based applications like voice recognition and object recognition also in the pipeline.

With reporting from Robert Hof