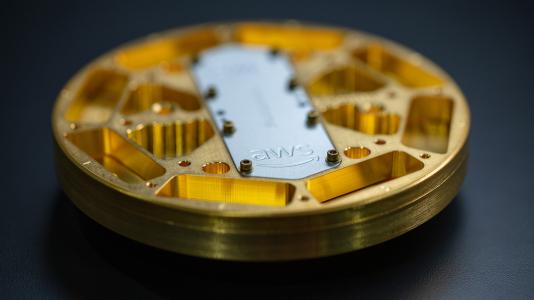 As nascent quantum computing seeks its first real use cases, the cloud has risen as something of a quantum bazaar where pioneering organizations test out wares.

In recent months, Amazon’s Braket cloud service showed itself as a very active platform for quantum developments. Such access to hardware and software via the cloud helps move quantum computing forward., providing pace for a field that has left many in wait-and-see mode.

This month, Amazon opened its doors to users of a photonic quantum computer from Canada’s Xanadu. It joins systems from D-Wave, IonQ, Rigetti and others on the list of supported Amazon Braket services.

Players such as Google and Microsoft also continue to partner with a stream of startups to add quantum  software and hardware options that are linked to their and others’ quantum developer kits and hardware.

These and others look to be part of a  quantum computing market Hyperion Research estimated to equal $490 million in 2021 and growing at 21.9% annually through to 2024.

“It’s super-interesting that quantum technology is being developed in an age of cloud computing. It means people can experiment way earlier than they would have been able to otherwise,” said Steve Brierley, CEO of Riverlane, a Cambridge, U.K.-based  firm developing a Deltaflow Control system to automatically calibrate a range of quantum computers.

“What’s very exciting is that  anybody can just use a quantum system right now,” he said.

For Amazon, its work to support quantum software tooling on its cloud keeps things in motion ahead of the arrival of its own fault-tolerant quantum computer. Work on that machine is underway at the AWS Center for Quantum Computing at Caltech, which opened last October.

To date, photonic quantum computers such as Xanadu’s Borealis have been less prevalent than superconducting and trapped ion quantum machines, but that could be changing.

Xanadu’s Borealis system enters the arena with assertions of quantum advantage. Detailed in an article in this month’s Nature, researchers claimed Borealis achieved a quantum computational advantage over classic computer simulations for Gaussian boson sampling. They said the sampling required only 36 microseconds versus 9,000 years for classical simulation.

Braket is built, and they will come

Cloud’s ready accessibility lets users test out claims such as those for Borealis, said Richard Moulds, general manager of Amazon Braket at AWS, in an interview with VentureBeat.

“There are about six or seven different ways you can build a quantum computer, and even within those different approaches, there are obviously different twists and turns,” Moulds said. “It’s important that these claims are tested by folks that can think of new novel ways of doing something.”

Like others, Moulds emphasizes that much of the activity in quantum computing includes simulations that tap into classical computers. In that sense, “there’s very tight binding between classical and quantum computers,” he said.

To ease those efforts, the company recently launched a new feature in Amazon Braket Hybrid Jobs that lets users run so-called hybrid workloads with simulators that are embedded within the algorithms that developers code to. An example is Xanadu’s PennyLane Lightning GPU simulator, which is accelerated by NVIDIA’s cuQuantum library.

“What we do is we make it easy for customers to use classical computers alongside quantum computers,” Moulds said.

Cloud’s ready accessibility can speed the process of trying out algorithms on different hardware.

For customers of Tel-Aviv, Israel-based Classiq, which has built a platform for designing, synthesizing and analyzing quantum circuits, Amazon Braket provides a kind of portal to test out such ideas.

The Classiq platform provides functional modeling and allows users to set constraints while working in a visual programming environment. Earlier this year, the company said it had gained $33 million in series B funding, bringing total funding to $48 million.

“There are people who would like to use AWS Braket but would not like do the tedious labor of writing down algorithms at an implementation level,” said Yehuda Naveh, cofounder and CTO of Classiq. The Classiq platform synthesizes circuit designs from high-level descriptions that run on any of the hardware supported by AWS Braket, he said.

Such capabilities have special merit in a field where so many alternative methods vie. As such, Amazon Braket provides a way forward for users that want to benchmark different hardware, Naveh indicated.

That gains in importance as the list of hardware options expands.

“It provides a low barrier to entry for end users to explore the technology,” said Bob Sorensen, senior vice president and chief analyst for quantum computing at Hyperion Research.  “Twenty years ago, if you wanted to kick the tires on HPC, you had to go to Cray, drop $25 million and hire staff. That was an expensive way to get into it!”

There is a lot of hands-on work needed by quantum startups if customers are to succeed in research, and move to development.