African leaders’ dash for gas is raising tensions at the top of the UN and exposing Europe’s conflicted approach to the fuel.

Across Africa, gas is at the heart of a development versus decarbonisation challenge.

“We might see in gas a transitional source of energy with certainly less emissions,” Egypt’s foreign minister and Cop27 president Sameh Shoukry told the Associated Press in Davos on Monday.

What that transition should look like dominated talks at the Sustainable Energy for All (SE4All) forum held in Kigali, Rwanda, last week.

“We need to plan now to be able to power Africa’s future industries sustainably but without slowing down our development,” said host Rwanda’s president Paul Kagame.

For ministers of at least 10 African nations, the answer lies in gas.

In a seven-point communique, they called on the international community to “support Africa in the deployment of gas as a transition fuel and the long-term displacement of gas by renewable energy and green hydrogen for industrial development, if financially and technically sustainable”.

This, they said, would help “address development gaps” and “put Africa on a pathway to economic prosperity and net zero”.

The Democratic Republic of Congo, Ghana, Kenya, Malawi, Morocco, Nigeria, Rwanda, Senegal, Uganda, and Zimbabwe signed on to the statement.

He described investing in new fossil fuel infrastructure as “moral and economic madness” following the publication of the latest Intergovernmental Panel on Climate Change report which showed that expanding coal, oil and gas production puts global climate goals at risk.

Ogunbiyi is responsible for delivering on a 2030 sustainable development goal for everyone to have access to affordable, reliable and sustainable energy. She joined SE4All at the start of 2020 with a firm opinion on the question.

“Gas, for me, in Africa, probably has to be part of the equation for a bit longer as a transitionary fuel because gas also affects cooking. I’m here in New York cooking with gas. It’s going to be very strange to tell the whole of Africa ‘don’t use gas because it’s a fossil [fuel] and continue using fuel wood’,” she told the BBC.

“If people that don’t have electricity in Africa got powered by gas today, it would increase Africa’s… emissions by 2-4%. That’s what we’re talking about. So it’s not fair to keep identifying Africa’s fossils as the problem,” she added, defending gas infrastructure projects on the continent.

/* Add your own Mailchimp form style overrides in your site stylesheet or in this style block.

We recommend moving this block and the preceding CSS link to the HEAD of your HTML file. */

A statement on the SE4All website, published following her appointment, says the organisation “recognises that interim solutions, including natural gas and liquefied petroleum gas, must be deployed urgently in some settings where they can best reduce human suffering and save lives”.

Mohammed has been less vocal on the issue but supports gas-powered development behind the scenes, sources close to the UN have told Climate Home. She did not respond to a request for comment. 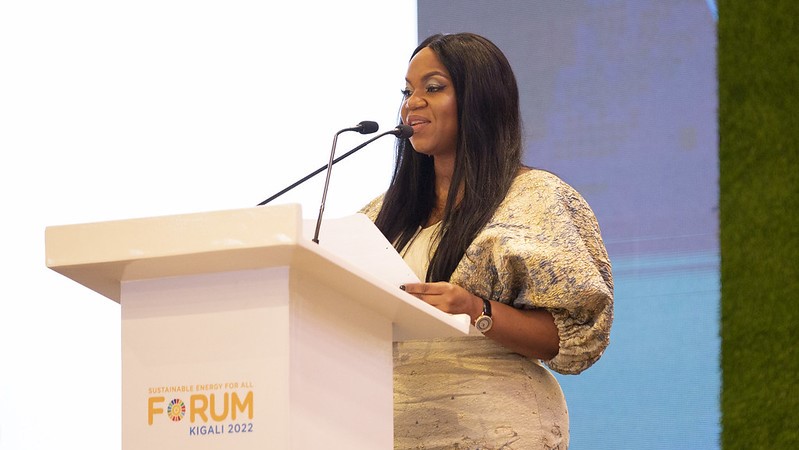 Damilola Ogunbiyi, CEO of Sustainable Energy for All, speaking at the organisation’s forum in Kigali, Rwanda (Photo: Rwanda’s ministry of enviornment/Flickr)

An estimated 90 million people are without power in Nigeria alone, according to 2019 data. Across Africa, 592 million people lack access to electricity. The Covid-19 pandemic led to a reversal of some of the earlier gains in energy access.

Ovigwe Eguegu, a Nigerian policy adviser at consultancy Development Reimagined, told Climate Home that ahead of a presidential election next year, “the national discourse is not even about gas as a transition fuel but rather ‘we need energy first and then we can discuss if it’s clean’.”

At the time of the interview, Eguegu’s home had been seven hours without power. Many middle-class Nigerian households use polluting diesel generators as backup for frequent grid outages.

“No candidate can come to Nigeria and argue against gas,” said Eguegu, adding that it would be “shocking” if Nigerians in high-powered UN jobs didn’t support gas as part of the solution.

A SE4All spokesperson added that the organisation “strongly supports” reaching global net zero emissions by 2050 and gas that displaces diesel use would need to be phased out from 2030.

“If we want these countries to move away from gas sooner, then they will need a great deal of additional support, particularly finance and technical support, from the global north,” they added.

Youba Sokona, of Mali, a vice chair of the IPCC and special advisor for Sustainable Development at the South Centre, said gas had become “dilemma” for the African continent. While current renewable deployment isn’t sufficient to power the continent’s industrialisation, developing new gas infrastructure risks leaving them stranded, he explained.

“The question is will Africa jumpstart electrifying its development or will it invest in fossil with all various risks associated it will have to face?”

For climate campaigners the road ahead is clear. Those “arguments for gas exploration and gas-fired power infrastructure in Africa are robbing us of vital time to switch to clean energy,” Ugandan youth activist Vanessa Nakate wrote in Al-Jazeera ahead of the SE4All summit.

“We need massive investment from the global north in clean energy in Africa. Climate justice for Africa does not mean following the mistakes of the rich countries who got us into this crisis,” she told Climate Home.

In fact, SE4All identifies off-grid renewable solutions such as solar mini-grids as the cheapest, quickest and most sustainable way to electrify Africa. Yet oil and gas companies have continued to pitched gas as a reliable and cleaner alternative to coal than can support developing countries’ economic growth.

And arguments about energy access obscure the reality that much of the gas production under development in Africa is destined for export. That includes to European countries that talk tough on fossil fuels, yet since Russia invaded Ukraine have been scrambling to secure gas supplies from other sources.

Comment: Russia’s war is no excuse for G7 ministers to duck their climate responsibilities

On the first stop of an African tour on Sunday, chancellor Olaf Scholz said Germany would “intensively” work to support offshore gas production in Senegal – a project developed by BP and embroiled in a corruption scandal.

Senegalese president Macky Sall said he was “dancing with joy” at the prospect of cooperation with Germany. LNG production and export to Europe “is an issue that is really close to our hearts,” he said.

Germany’s support for Senegal’s gas exploitation appears to violate a Cop26 pledge signed by Berlin and more than 30 other countries to end international public finance for unabated fossil fuels, including gas, by the end of this year – a pledge that angered West African leaders.

A climate ministry spokesperson insisted Germany stood by its commitment.

But these mixed messages have led to fresh accusations of European hypocrisy. “If Europe is using gas as a transition fuel or for political calculations, why shouldn’t we?,” asked Eguegu.

Aki Kachi, of the New Climate Institute, told Climate Home the prospect of a deal “undermines Germany’s international credibility to live up to its promises”. Starting on Wednesday, Germany is hosting a G7 meeting of climate ministers, where ending public finance for fossil fuels is on the table.

“These European nations know that fossil fuels like gas are not the future and once they have their renewables up to speed, they will drop these new gas agreements,” Mohamed Adow, director of Power Shift Africa, told Climate Home.

“For Africa, it would be idiotic to invest our little resources to expand gas production just to help Europe in the short term when we could be investing in our own sustainable renewable energy,” he said.