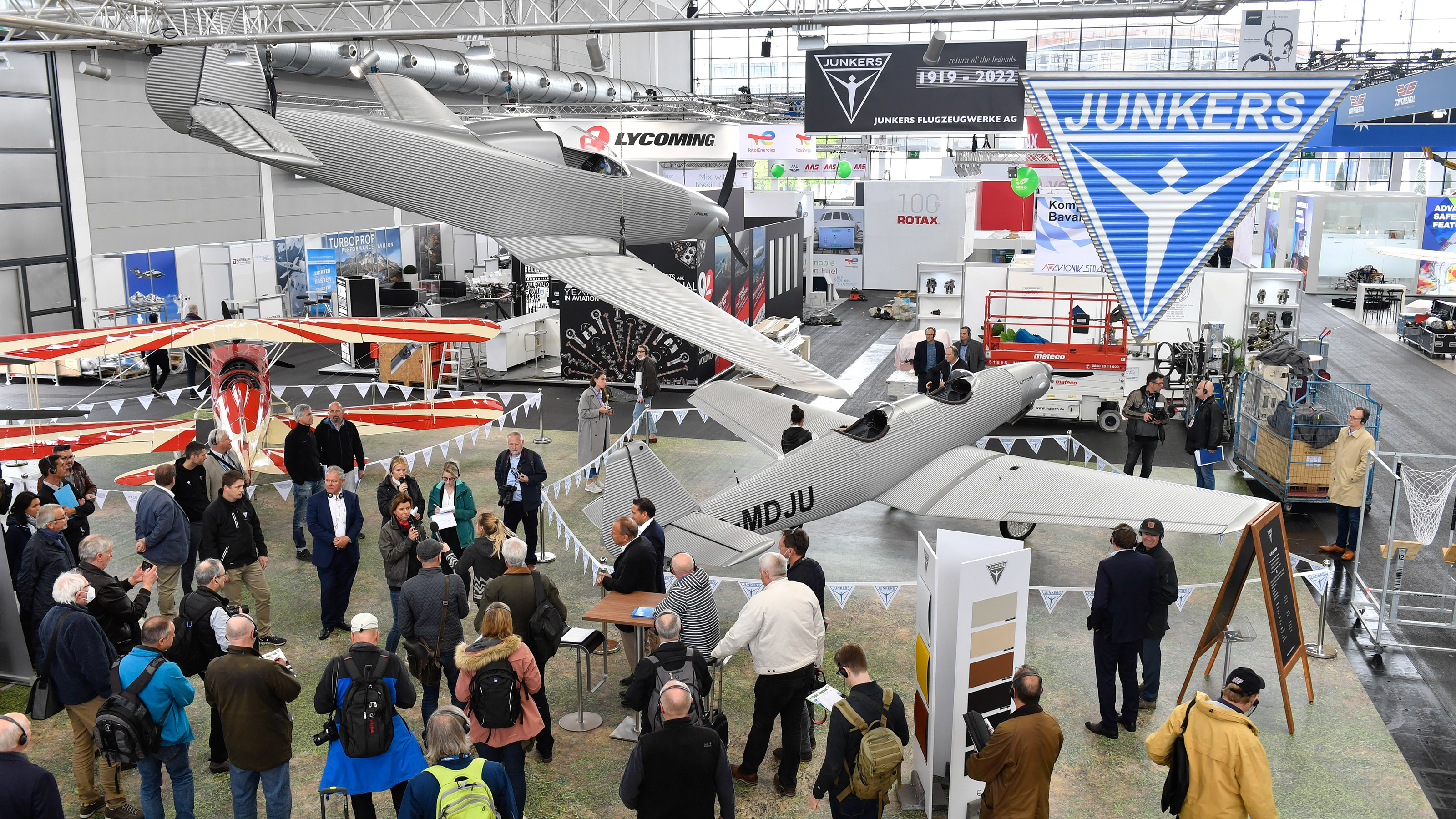 Aero began this year’s four-day event with its traditional media day—a whirlwind tour of selected exhibits that were heavy on electric vertical lift and alternative propulsion concepts. In short, Aero’s usual commitment to ambitious, eco-friendly designs. Here’s a quick rundown from the media rabble, as it trailed a (helpful) “Follow Me” sign through several stops in Aero’s 11 hangar-themed exhibit halls.

European-based Flight Design is already well-known for its CT series of light sport aircraft, plus its new F2 line of certified and LSA variants, its F2e electrically-powered two-seater, and F4 four-seater. In spite of the loss of its Kerson, Ukraine, factory to Russian invaders, Flight Design has managed to come up with yet another new design—the hydrogen-powered HYFLY. It looks for all the world like an F2, but this proof-of-concept design is intended to carry four to five gallons of hydrogen, giving it an estimated two-hour endurance. The company expects certification under EASA’s CS-23 rules—the European version of the United States’ Part 23.

Freshly snatched up by GA giant Textron, Slovenian manufacturer Pipistrel showed off its latest electrically-powered design, the Velis Electro. In Europe, the Velis Electro is certified under EASA CS-LSA rules, which allow it to fly at night and under IFR (but not in actual instrument conditions). Pipistrel, which will retain its corporate identity under the new ownership arrangement, expects FAR Part 23 and LSA approvals in the United States “soon,” according to Matthias Betsch, Flight Design’s head of new designs and business development. Currently, electrically-powered aircraft aren’t certifiable under American regulations. Maybe Betsch has some inside knowledge.

This eVTOL is a German design in the proof-of-concept stage. It has one nose-mounted conventional propeller for cruise flight and eight boom-mounted props for hovering flight. First flight of the single-seater was in May 2021, and the company advertises a two-hour endurance on a four-hour charge of its front propeller battery and two-hour charges of its hover-motor batteries. The eMagic One has a forward canard wing, and a rear, main wing with elevons (having combined full-span elevator and aileron functions) for pitch and roll control. Like a helicopter, the aircraft uses collective lift controls for takeoffs, landings, and other vertical maneuvers. A two-seater is in the works, and the company believes that the American market holds the most promise in terms of sales, either in the experimental or special light sport aircraft markets.

Rolls-Royce bought out Siemens’ electric motor division in 2019, and at this year’s Aero the company showed off its product range for UAM and RAM (urban air mobility and regional air mobility, respectively), which includes electric motors, turbogenerators, and control units. Together with Germany’s MTU Aero Engines, the company also manufactures energy storage and charging units for aircraft and automobiles. In terms of electric motors for aviation, Rolls-Royce’s launch customer is the United Kingdom’s Vertical Aerospace, although it’s also providing an electrical motor for a hybrid power train that uses a Rotax engine for a new airplane—the HP35—based on the Tecnam P2010. That project is being funded by the European Union’s Horizon 2020 research and innovation program.

This is a hydrogen-powered four-seater that uses 20 pounds of pressurized hydrogen to allow flights with ranges up to 380 nautical miles. The hydrogen charging process takes five to six minutes. The company says the H2Fly project is scalable, and could easily evolve into a 40-seat regional aircraft by 2025, with a range of 1,080 nm. In April 2022, the H2Fly reached 7,230 feet on a flight from the Friedrichshafen airport, which the company says is higher than any other hydrogen-powered aircraft to date.

This is a project that powers a Bristell airframe with three electric motors. Co-founder Gregory Blatt, who was involved in the solar-powered Solar Impulse around-the-world flight, said that the H55 had its first flight in June 2019, has completed much of its flight-test program, and should go to market later in 2022, under EASA’s CS-23 certification rules. H55, a Swiss company, manufactures the airplane’s motor, power controller, and gearbox.

Legendary German manufacturer Junkers, now a part of the American Waco Aircraft Corp., unveiled three new designs—the tandem two-seat, Rotax-powered A50; the two-seat, side-by-side retractable A60, also Rotax-powered; and a vastly upgraded version of the historic Ju52 trimotor. The open-cockpit A50 will be certified under German ultralight rules, as will be A60. The A50 will have a 1929-style instrument panel; the aft cockpit will have state-of-the-art Garmin avionics. The $191,000 A50 should be certified later in 2022, and will be available in several colors. The A60’s first flight is set for Spring 2023. Alas, the new Ju52 NG will not have Rotax power. The 14-seater will have three 500- to 600-horsepower Red turbodiesel engines. And yes, all the new Junkers will have the company’s signature corrugated airframe.