The global energy crisis is intensifying, hammering the shares of companies that consume a lot of power and sending the stocks of those that produce it soaring.

Economic recovery from the pandemic has boosted demand for gas and coal but their supplies have not been able to keep up. With the northern hemisphere winter on the horizon and China — the world’s biggest electricity user — ordering state-owned energy firms to secure supplies at all costs, investors are in a race to pick the winners and losers.

A key measure of international energy producers, led by names including Cabot Oil & Gas Corp. and ConocoPhillips, has rallied almost 10% over the past month. Utilities stocks have gone into reverse, wiping out this year’s gains, with materials companies joining them among the biggest laggards on the MSCI World Index.

“The energy crisis can exist for the next several years. I think a super cycle in energy has started and will continue for several years,” said Sumeet Rohra, a fund manager at Smartsun Capital Pte. in Singapore. “Energy stocks are very well poised to generate big returns.” 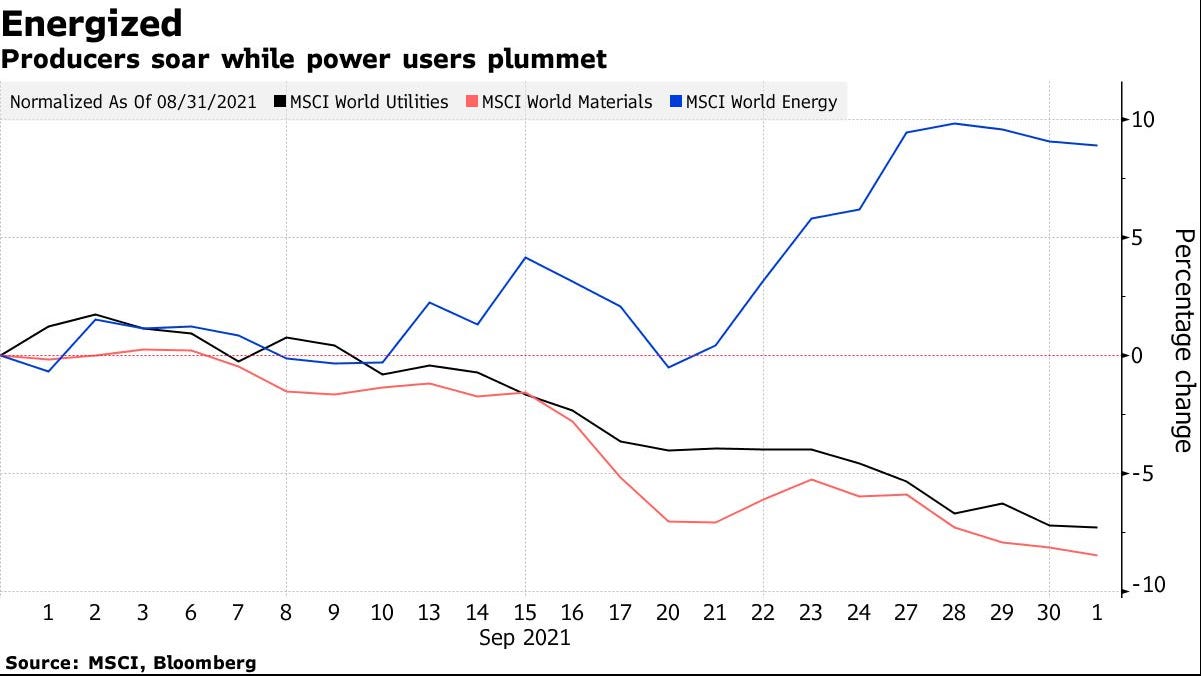 China’s factory sector contracted in September for the first time since the pandemic began, thanks to power cuts that have affected regions making up more than two-thirds of the nation’s gross domestic product. The energy crunch has also reportedly halted production at suppliers of global tech giants such as Apple Inc. and Tesla Inc.

Meanwhile, European inventories of natural gas are running low as economies come out of the pandemic lockdown and the White House has expressed concern about the jump in oil prices.

Here is a guide to how the crisis is playing out in equities market:

Companies that produce gas, oil and coal are set to continue benefiting as winter approaches and demand rises.

“It is not just about a short term supply-demand imbalance,” said Gary Dugan, chief executive officer of the Global CIO Office. “The energy crunch is very concerning as it leads to the worst case scenario for markets — that of stagflation,” he said, referring to a situation in which economic growth stalls while inflation and unemployment rise.

If the current tightness in the gas market endures into next year, then Total could see 2022 earnings boosted by 18% and Eni by 12%, Goldman Sachs Group Inc. analysts including Lilia Peytavin wrote in a note last week.

Exxon Mobil Corp. said on Sept. 30 that elevated gas prices will boost its third quarter profit by about $700 million.

A three-year-high in oil prices also helps Exxon, and should keep others such as Schlumberger Ltd., ConocoPhillips and Halliburton Co. on the radar of traders.

In contrast, gas distributors such as China Gas Holdings Ltd., Hong Kong and China Gas Co., Kunlun Energy Co, and Indraprastha Gas Ltd. may face margin pressure if they are not allowed to pass on rising input costs.

While rising power prices hurt all users, it is particularly acute for energy-intensive materials and metal companies.

Many government-backed electricity providers are likely to face margin pressure while those that are less regulated or independent have a better chance profiting from higher electricity prices.

The most visible signs of stock market distress so far have been in southern Europe’s heavily regulated utilities. Iberdrola SA and Endesa SA shares are both trading at their lowest levels in more than last year.

Higher energy prices and efforts to cut carbon emissions are also flowing through into the share prices of renewable power and nuclear stocks.

Bloomberg Intelligence’s Laurent Douillet sees large nuclear and hydro electricity companies as potential winners over those that rely on gas and coal.

“There hasn’t been a confluence of so many factors happening at the same time in energy and commodity markets since at least the 1980s,” said Robert Ryan, chief commodity and energy strategist at BCA Research.