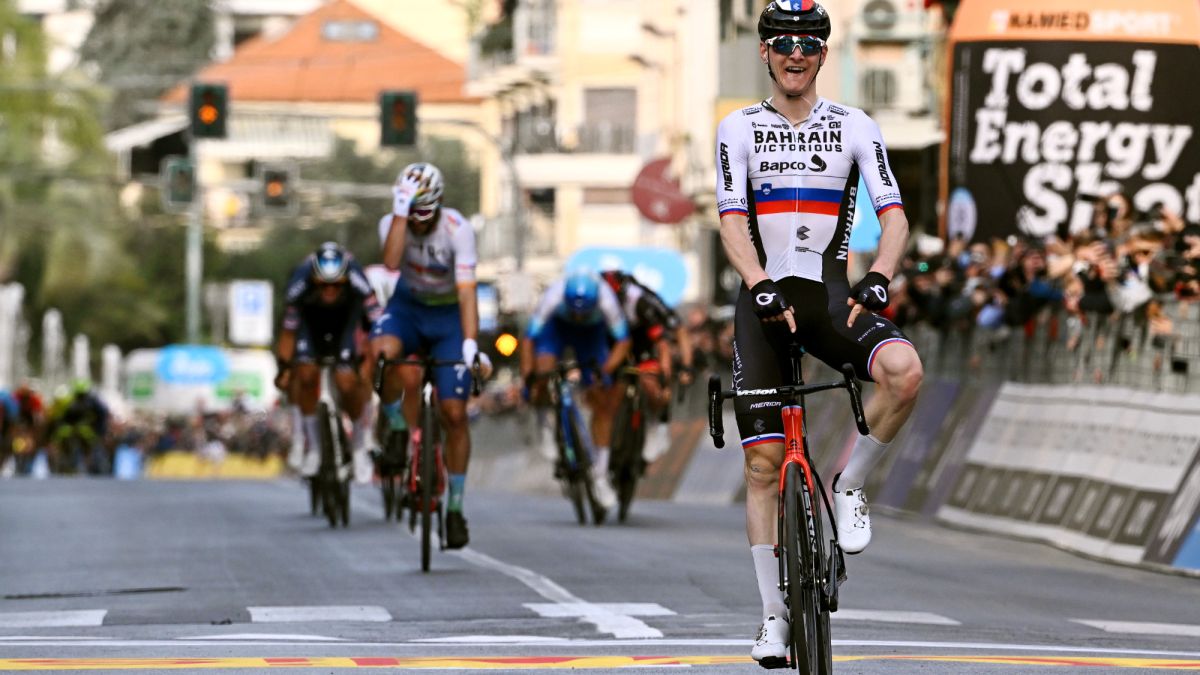 It was the dropper post that hogged the headlines following Matej Mohorič’s victory at Milan-San Remo, but Cyclingnews has since uncovered another secret tech trick that helped his decisive attack on the vertiginous descent from the Poggio onto the Via Roma.

Whereas he’d have ordinarily run a 160mm Shimano rotor on the front wheel, this time he went up to 180mm, which is too big for many standard road frames and beyond the recommended size for the Merida Scultura Team on which he raced. However, he considered it so important to his success that he ordered his bike to be fitted with special adapters to allow for the enlarged rotors.

On closer inspection, Mohorič used a 180mm Shimano XTR disc rotor on the front wheel and a 160mm rotor on the rear. This is 20mm larger than the more common configuration of 160mm at the front and 140mm at the rear, while some riders opt for the smallest and lightest 140mm option at each end.

The benefits of the enlarged rotors are two-fold; an increase in rotor heat management under heavy braking and better braking power.

A 180mm rotor has 13 per cent more braking surface area than that of a 160mm rotor and, when braking, the kinetic energy is transformed into heat. Having a larger area to dissipate this heat means less heat build-up and in turn, more consistent performance. On such a short descent it’s unlikely that this was Mohorič’s main motivator; the increase in stopping power would have been the primary reason.

Basic physics tells us that bigger rotors mean more leverage acting on the wheel, which in turn means more stopping power for the same input applied at the brake lever. This increase in braking power would theoretically allow Mohorič to decelerate faster, allowing him to brake later into corners, maintaining his descending speed for a fraction of a second longer before each turn.

Mohorič reportedly trained on the descent of the Poggio numerous times to test his special set-up, with Bahrain Victorious even considering asking local police to close the road so he could ride at race speed. That idea was scrapped but it is clear  Mohorič and Bahrain Victorious looked at every detail to maximise a marginal gain.

The subtle disc rotor modification flew under the radar as Mohorič pointed to his dropper post – which allowed him to descend in a more aerodynamic and controlled fashion – when he crossed the line alone on the Via Roma, before singing its praises to the press beyond the finish line.

It was just one of a series of hacks that Mohorič thought up as he drew up his plans for Milan-San Remo success. In order to use a standard round dropper post, he had to use Merida’s Scultura, which is a climber’s bike, rather than the Reacto aero bike which has an aero-shaped seat post. The Reacto would have accepted the enlarged rotor but the Scultura has a maximum disc capacity of 160mm, hence the need to fit the adaptors.

There was no Scultura painted in Slovenian colours to match Mohorič national champion’s jersey, but he was happy to ride on team-issue paint in order to have the dropper post. The larger rotors were undoubtedly more subtle, but they also played their own part in the historic victory.