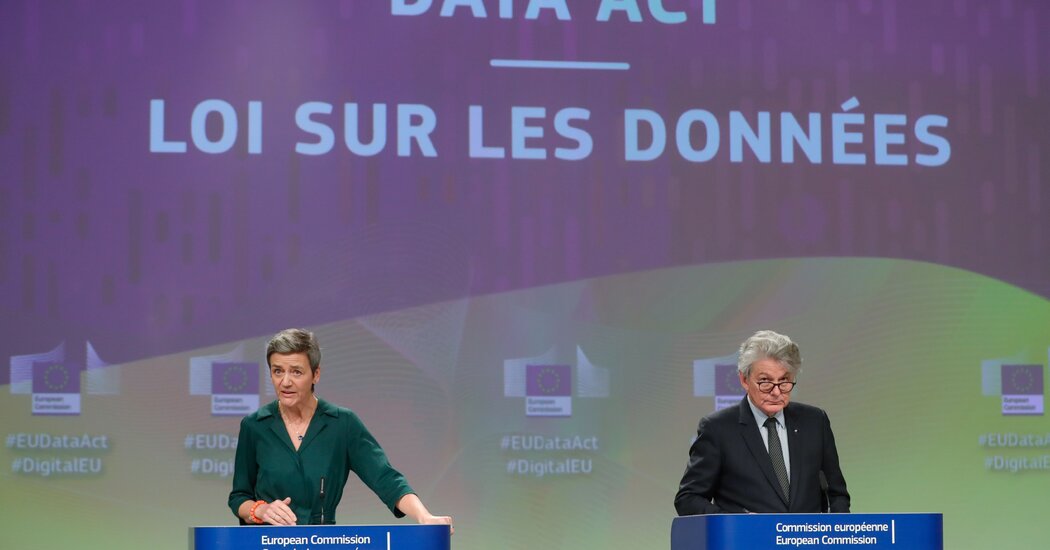 The European Union has just agreed on one of the world’s most far-reaching laws to rein in the power of tech companies.

The Digital Markets Act is aimed at stopping the largest tech platforms from using their interlocking services and considerable resources to box in users and squeeze emerging rivals. It could potentially reshape app stores, online advertising, e-commerce, messaging services and other everyday digital tools, in Europe and beyond.

The law will apply to “gatekeeper platforms” with a market value of more than 75 billion euros, or about $83 billion, which include Alphabet, Amazon, Apple, Meta and Microsoft. Violators of the law, which could take effect later this year, would face significant fines.

The law is part of a one-two punch by European regulators. As early as next month, the E.U. is expected to reach agreement on a law that would force social media companies to police their platforms more aggressively. And these come after the bloc put the world’s strictest rules to protect people’s online data into effect in 2018. (That’s why nearly every website has pop-ups asking you for permission to track your data.)

Here are some of the potential effects of the new law:

Europe’s new rules are a preview of what’s to come elsewhere, since it’s often easier for companies to apply the standards across their entire operations rather than in one geography. Still, companies are expected to look for ways to diminish the impact of the new law through the courts.

The U.S. charges four Russians with a vast infrastructure cyberattack. The group, which includes three officials in Moscow’s domestic intelligence agency, is accused of hacking energy companies around the world — including a nuclear power plant in Kansas — from 2014 to 2018.

China Eastern Airlines grounds hundreds of Boeing jets. The airline temporarily halted the use of 223 737-800 planes, the model involved in the crash of a flight that carried 132 people; no survivors have yet been found. Adding to the mystery surrounding the cause of the crash is that both pilots were among the most experienced in China.

Uber reaches a truce with Big Taxi in New York City. The ride-hailing giant will team up with two taxi companies, Curb and CMT, to let New Yorkers order a yellow cab via the Uber app. The deal will help both sides of a longtime rivalry recover from the pandemic.

Instacart cuts its valuation by nearly 40 percent. The privately held grocery delivery app told employees it now valued itself at $24 billion, down from $39 billion. The move reflects the battering tech companies have faced in the public markets, but could also give employees more upside with newly issued stock-based compensation.

A campaign to let unvaccinated athletes play in New York succeeds. Executives at pro sports teams, including the Mets owner Steve Cohen, paid tens of thousands to lobby city and state officials on changing Covid protocols, The Times reports. Mayor Eric Adams of New York City announced the end of the ban yesterday, though he insisted lobbying played no role.

The latest in the Russia-Ukraine war

When should companies care about employee tweets?

Last month, Jennifer Sey quit a top job at Levi’s, giving up a potential shot at C.E.O., via an essay that was widely circulated online. In the post, Sey said the clothing company where she had worked for more than 20 years warned her against expressing her personal views on social media, broadcast media and elsewhere, that closing schools during the pandemic made kids worse off. She quit instead of negotiating an exit package, which attracted even more attention to her situation.

Her departure raises issues like whether corporations can control the personal speech of their employees and the politics tied to speaking on certain platforms, like Fox News opinion shows, The Times’s Sapna Maheshwari reports.

Sey’s tweets went beyond just questioning school closings. She criticized guidance from the C.D.C. and accused Dr. Anthony Fauci of fearmongering. This came as Levi’s was trying to set Covid safety protocols in its stores and manage potential pushback from customers and employees. Outside of the company, Sey’s comments drew threats of boycotts. Levi’s said that its social media guidelines allow employees to speak out online, as long as they are mindful of the company’s reputation.

Sey said her speech should have been protected, since she was speaking as a concerned mother, not a corporate executive. She argued she was subject to “viewpoint discrimination” by Levi’s, and said there hadn’t been a problem in the past when she spoke in support of liberal causes.

Complicating matters is that executives are expected to speak out more often on social issues these days. “A private employer can impose restrictions on employees’ speech or conduct,” said Sarah Sobieraj, a professor of sociology at Tufts University. “The key issue here is where that boundary lies and what about when you’re not working.”

“Why is the N.B.A. being singled out as the one company that should now boycott China?”

— Adam Silver, the N.B.A. commissioner, on criticism of the league’s stance on human rights in China. The former N.B.A. player Enes Kanter Freedom has taken the league to task for continuing to do business in the country, and said that he is being blackballed by teams as a result.

Mark Sirower has been scrutinizing deals for decades, and finding mostly failures. His 1997 book “The Synergy Trap” examined the major mergers of the 1980s, deeming two-thirds of them ultimately unsuccessful.

In a new follow-up with his Deloitte colleague Jeffery Weirens, “The Synergy Solution,” they examine more than 1,000 deals spanning 24 years, worth over $5 trillion — with similarly dismal results. Yet dealmaking is hotter than ever. Sirower talked to DealBook about this moment in mergers. The interview has been edited and condensed.

It’s staggering by any historical standard. We’re at all-time record highs. In 2021 we had a huge uptick in the value and volume of deals. The value went up roughly 60 percent, to $5.5 trillion. The volume went up 26 percent, to over 60,000 transactions. This is the number that really got me — the number of big deals. Deals over $1 billion doubled in 2021, so 2 percent of deals made up over 65 percent of the value.

How should we interpret these numbers?

This is the fourth merger wave I’ve seen. When we get to this part of the wave, companies tend to be reactive if they’re unprepared. Companies that weren’t doing deals start doing them, or companies that have been acquisitive now start doing more or bigger deals, and at near-all-time-high market valuations.

One of the things we’ve learned over time is that M.&A. is highly correlated with rising stock markets. It’s partly optimism, thinking it is going to go on forever.

What’s different about this wave?

In the ’80s and ’90s, it was still pretty much a U.S.-dominated market. Now it’s very much a global market. U.S. targets last year represented less than half of the total deal value.

Given the pandemic, war and supply chain strains, will the globalization trend end?

The data doesn’t bear it out. I thought when Covid hit it was just going to crush our business. And it didn’t.

Best of the rest

We’d like your feedback. Please email thoughts and suggestions to dealbook@nytimes.com.